One of the more obscure entries in the Magic canon is the collection of calendars WotC has released over the years. Most of them just have some pretty pictures and nothing else but a few actually contained relevant lore, including the backstory of some legendary creatures and maps of various continents of Dominaria. I had pretty much resigned myself to not covering them, but then the always excellent Magic Librarities website uploaded a whole bunch of scans of them, allowing me to take a look anyway.

The ones that I will be covering here are the monthly calendars up to 1999 and the 1997 "365 days in Dominia" daily calendar. The ones released later (at least the ones that I know off) just show art, so they are not as interesting for lore junkies. I don't know if this list is exhaustive, but we can always do another addendum article, can't we?

Quick note: for a long time I thought there must've been another daily calendar, as Jeff Lee claimed to have taken his info on the Elder Dragon War from one. His description matched the "365 days in Dominia" calendar pretty well, except for the inconvenient fact that there is nothing on Elder Dragons in that one! The later discovery of unused flavor text for Elder Land Wurm which did talk about the War suggests to me that Jeff was misremembering things. I think it is likely that he took info on various legendary creatures from the "365 days in Dominia" calendar but was given the stuff on Elder Dragons by Pete Venters directly, and that he conflated the two when talking about it years later. (If another daily calendar ever turns up though, I'll certainly cover it!) 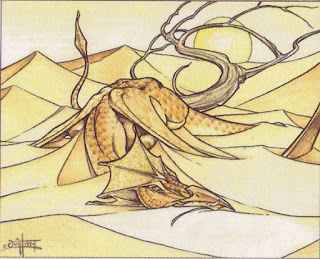 1995 Calendar & 1996 Calendar
The first two calendars are pretty light on lore. Both of them showcase larger versions of card arts. The first also talks about how the artists approached their work and what techniques they used, the second just has pretty pictures. I'm mostly just mentioning them here to show the development of the calendars over the years, though do like seeing what Anson Maddocks has to say about Hurloon Minotaur. It sounds like he just made up something he thought looked cool, inadvertently laying the basis for the whole Hurloon culture that was developed out of that one piece of art in a variety of pre-rev sources.

1997 Calendar, 1998 Calendar & 1999 Calendar
Now here things get interesting. These calendars are the origin of some of the most detailed maps of Aerona, Jamuraa and Terisiare we have! In addition to that the first two do not just show bigger versions of card art, but alternate arts with accompanying lore tidbits. For example, here the Hurloon Minotaur entry tells us "The Hurloon's decorative tattoos, echoing the cave hieroglyphs of their mountain homes, are symbols of status within their society", which is quite a bit deeper lorewise than just that Anson Maddocks thought they looked awesome. 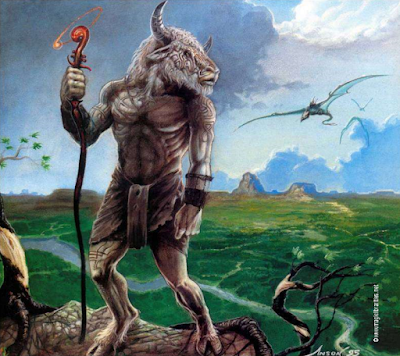 There is plenty here to prove that the pre-revisionist continuity wasn't just a collection of random contradictory sources. The 1997 calendar has references to the Jedit Ojanen, Ice Age and Homelands comics, as well as the Feast of Kjeld short story from The Duelist. Of course it is all pre-rev, so there are references to things like the Phyrexians' "Yawgmoth masters", showing that in those days "Yawgmoth" tended to refer to either Demons or Priests, not yet to the character from the Weatherlight Saga. Oh, and one mistake did slip in: it is said those War Beasts came from the Caves of Korlis, rather than Koilos. The difference between those two places was well established by this time so this must have been a typo.

The 1998 calendar gives us what is probably the first picture made of Teferi. He previously appeared in very pixely form in the Battlemage video game in 1997, but this piece of art was made in 1996 (As confirmed by artist DiTerlizzi in this tweet). Here Teferi is looking a bit older and with a different outfit than what we've come to expect from him. 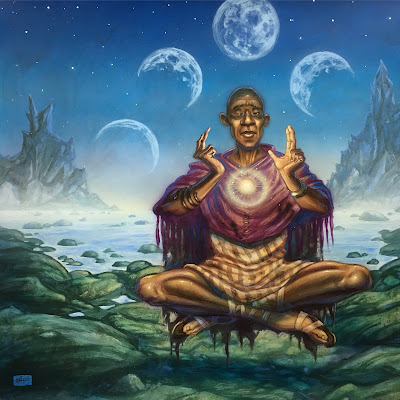 The entry for Zirilan of the Claw mentions that the viashino are descendants of dragons. The official sources we've seen so far go back and forth on whether the viashino are lizard-people or dragon-people (or creations of Terrent Amese), but we've seen this specific claim before on Jeff Lee's site, so perhaps he did take some dragon-related information from a calendar after all!

From 1999 onward there is no text presented on Magic Librarities, so I assume there wasn't any. That year we do still get the map for Terisiare though. Librarities doesn't have a scan of it, but it really can only be this one.

The Jamuraa map from the 1998 calendar is by far the most detailed map we ever got of the Mirage setting, as it otherwise only showed up as a small part of larger world maps or on one tiny, pixelated map in the Oasis Choose-Your-Own-Adventure game. It matches very well with all the descriptions of the region we've gotten from various sources and contains pretty much every location name checked in the cardgame itself.

The 1997 map of Aerona is the most important one, as it is the first time we got a clear view of where all these places from Alpha and the earliest Harper Prism novels were located. The Magic Librarities scan isn't very clear, but you can find a better version on the MTG Wiki. That one doesn't include the text underneath, but MTGSally user KavuMonarch provided us with that text here. Since it has been brought to my awareness that a lot of the old forum isn't visible anymore, I'll just repost the text here before it goes missing as well:


"Of all the regions of Dominaria, the Domains are the favorite of planeswalkers for the rich variety of creatures, cultures, and fierce warriors nurtured there.

The islands of the Eastern Domains stretch for thousands of miles, pointing the way to shattered Terisiare in the west, Sarpadia to the south, and the eternal ice of the north.

The Central Domains consist of three continents: inhospitable Icehaven, and North and South Aerona, which are linked by the Hurloon Mountains, a range of impassable peaks. Many of the greatest civilizations of Dominaria are found here.

Benalia, risen from the ashes of the Sheoltun Empire, is a prosperous city-state thanks to the rich harvests of the Spice Isles she controls.

Estark, the once-proud festival city in the heart of Kush, has declined since the Time of Troubles. Many of its citizens now live modestly in the countryside.

The Llanowar forest shelters a range of elvish civilizations, from communal treetowns to tribal matriarchies. One imperative unites these disparate groups - protecting their nomes from the orcs and goblins of the Ironclaw Mountains.

The minotaurs of Hurloon arrived in North Aerona centuries ago after being forced from their homeland by the encroaching glaciers. They traveled south until they faced an impassable chain of mountains where they chose to take shelter in the caves until the cold ended. They now dwell in the mountains, living in small tribes, the largest of which is in the fertile Hurloon Valley.

Icehaven is home to many small states, separated by this barren land's indigenous tribes of stone giants. the Kingdom of Parma and the Land of Keld are foremost among those states.

The people of Parma believe that the hardship of their environment is a spiritual purifier that winnows out the weak and strengthens the worthy. Their paladins travel throughout the Domains spreading their society's central teaching.

The warlords of Keld tipify this cruel land, enslaving their people through magic, and sacrificing them in battle for the glory of Keld.

Oneah once was one of the most enlightened of societies. Though famous for their martial skills, Oneahns viewed the ownership of a bladed weapon as strictly taboo. In time, the goblins of the Red Mountains overran and destroyed this beautiful city.

Shanodin and Savaea lie south of Oneah, mysterious forests that even goblins fear to enter. Little is known of these places, for few who enter them survive, and those who do cannot bear to speak of their experiences within.

Mysteries Remain
There are many other lands - blighted Muronia and Wrenna, both succumbing to corruption's cold embrace, but from different causes... Coraleon, the city of continued festival, where every emotion is celebrated... the Green Lands, home of the centaurs... Foriys, inhabited by giants... Sursi, with its pegasii... the Whispering Woods, so full of life that its sounds can drive one mad... Avenant, with its noble warriors... Efrava, the secluded home of the cat people. Each place holds countless stories - of hope and despair, of the rise and fall of individuals and societies, and the heart's struggle to survive. All these stories are waiting to be revealed in this part of Dominaria."

The first thing I want to say about this: Oh thank god I finally rediscovered where it was implied the Hurloon moved into the mountains during the Ice Age! That I couldn't find that bit has been bothering me for ages!

Other than that there isn't a whole lot to say. It all matches up pretty well with what we knew of all these locations in those pre-rev days. The only weird thing is that it lists Efrava among the Aeronan states. This has led some people to suggest there may be two Efrava's, one here and one in Jamuraa, but I prefer to just write it off as a mistake. Bad enough that there are three Scarwoods hanging out on Dominaria!

While I'm talking about Aerona maps, I should also mention that according to KavuMonarch in that thread I linked to above, the other Aerona map originated in an issue of Top Deck.


"365 Days in Dominia"
As you would hope from a 365 page document, this one has a whole bunch of interesting stuff. 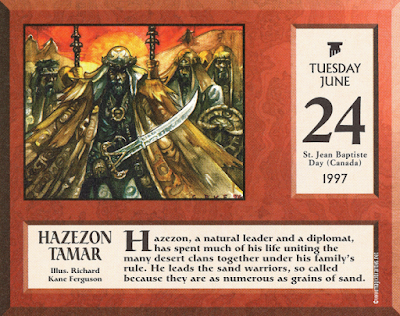 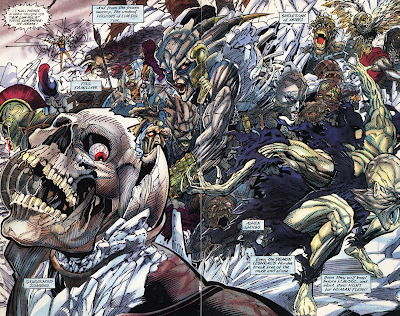 And with that one more pretty picture I've reached the end of all the calendars that seemed to be worth mentioning. Although perhaps not the most important parts of the canon, I love that these obscure sources have finally been unearthed and shared with us all!
Posted by Squirle at 22:45