Now that we are done with the Weatherlight Saga, I thought I'd give you all a little heads up on what I'm going to cover next. Because at this point the release schedule of the books get's a bit cluttered. First a list of all the books released, in chronological order, from Invasion block to Mirrodin block. I've color-coded the various cycles for your convenience.

So yeah... at least the anthology titles fit neatly in between the regular cycles, but the Legends I and II cycles get everywhere, each being released simultaneously with two regular cycles. To make it easier for myself to do the continuity and timeline overviews, I'll move them around a bit in my schedule, so we only cover one cycle at a time. Furthermore, since Odyssey block runs straight into Onslaught block I want to keep as few novels as possible in between those. Thus Legends I will be moved forward and covered before we get to Odyssey, while Legends II will have to wait until Onslaught is wrapped up. Don't worry, Legends I and II have absolutely nothing to do with one another. Secrets of Magic can stay put, as it actually has some interesting backstory on minor Odyssey/Onslaught characters like Balthor. Finally there's a handful of other stuff I still need to cover, which makes the review schedule for the coming months as follows:
Somewhere in between all this I will also do a review of the Portal: Second Age story, but when that will be depends on when my copy of The Official Guide to Portal: Second Age arrives.

From Mirrodin onward the storyline starts following an easy to follow schedule again, with each set getting their own novel and the extra cycles and anthology series being cancelled. At that point we really only have to worry about a few online anthologies and the occasional tidbit from a player's guide. But by the time I'm covering those we should be well into next year, so let's not get ahead of ourselves!
Posted by Squirle at 00:56 6 comments: 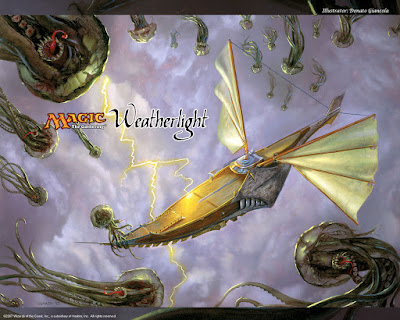 Was the Weatherlight Saga a succes? Was it even any good? Well, let's first figure out what we actually mean by "the Weatherlight Saga", because there are a number of different things rolled into that one name. First and foremost it is of course a story. The story of the Weatherlight Crew, whose adventures are revealed to be just a part of Urza's ongoing war against Phyrexia. But it can also mean a format, in which the story is told through WotC publications, rather than the preceding third party stuff, and is tied much closer to the game itself, compared to what came after. It is also used as a way of looking at continuity: when we talk about the Weatherlight Saga we place it in opposition to the supposedly chaotic and self-contradicting pre-revisionist stories and the less integrated planeshopping blocks. And finally there is the Weatherlight Saga as an attitude of Wizards of the Coast, one in which the storyline had an unprecedented importance. Perhaps the greatest importance up to the current Gatewatch era.

In short, the Weatherlight Saga is not just a story, it is an era in the history of the game, with distinctive traits in almost every aspect of the storyline. So let's go through these aspects one by one.