So I’m doing a little wrap-up post for the Harper Prism books. As I only had read the first five of them, the later held a number of surprises for me about the series as a whole, which I wanted to quickly discuss. The second part of this post will be devoted to a discussion of how to place these stories on the timeline as it has been, rightly, noted that relying on that single reference in the Pocket Players’ Guide is a bit flimsy. I'll close this article with a list of all the Harper Prism stories, listing the evidence for where to place them on the timeline for each and every one. Thus this page can function as a reference sheet for the timeline.

HARPER PRISM OVERVIEW
Quality-wise there is little that can be said about the Harper Prism line as a whole, as the quality is all over the place. The first four books are decent, but not great, although the game of “spot the card reference” adds another layer of fun. Prodigal Sorcerer, Ashes of the Sun and Dark Legacy all pleasantly surprised me with strong characterization and good world building, but some of the short stories from Distant Planes were actively painful, and Cursed Land probably deserves a spot in my top 10 Worst Magic Novels.

A much more interesting thing to note is the abrupt disappearance of pretty much everything to do with Magic the Gathering after Final Sacrifice. Cursed Land and Song of Time only reference things unique to Magic in their pro- and epilogue. Prodigal Sorcerer only bases the clothing style of the Suder on the artwork of Prodigal Sorcerer, that’s it. It really makes it feel like those books were quick cash ins, existing manuscripts with one or two paragraphs quickly rewritten to ride the Magic bandwagon. Looking back on it, it feels really weird. Especially since the first four books are tied so directly to the card game that every spell, creature and artifact is recognizable.
Read more »
Posted by Squirle at 01:24 No comments: 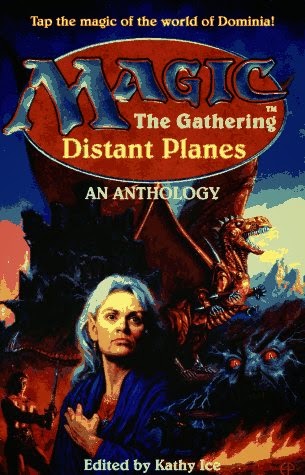 We've reached the final installment of the Harper Prism leg of my project! Tomorrow I'll post a little overview of all twelve books, plus a discussion of their place in the canon. As for this last anthology... there really isn't much to say about this one that I didn't already say last week. I'm not a big fan of anthologies, but I'm always entertained by continuity references. Luckily, Distant Planes has even more of those references than Tapestries! And this book has another cool feature: every story is accompanied by an illustration! Which means I actually have something to show you all, so I don't have to use tangentially related Magic cards as illustrations! (For the same reason I'm looking forward to next week, when I start reviewing the Armada comics!)

Confession time... I tend not to like the Magic anthologies all that much. In my eyes the best Magic stories have good characterization, interesting worldbuilding and links to the larger continuity, three things that short stories found in the anthologies often lack. They are simply too short to excite much interest in the characters or the setting. The later anthologies, published by Wizards themselves, sometimes get around this by using established settings like Mirage or Ice Age, or even by taking a known character like Urza or Barrin as their lead. Even then though, we'll see a whole lot of stuff completely unrelated to the rest of continuity, featuring absolute nobody characters and referencing maybe one random card, if you're lucky. As for the two Harper Prism anthologies, I went in fearing the worst. Even continuity references couldn't save these stories, I reckoned, as there simply was no continuity to reference at this point.

But let's get to the individual stories to see if my suspicions are correct!
Read more »
Posted by Squirle at 18:01 6 comments: 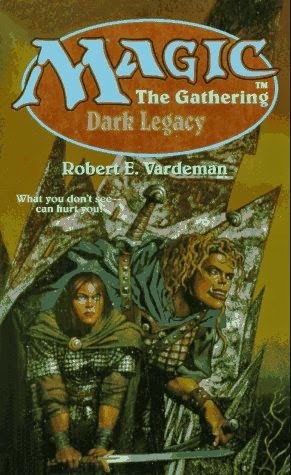 SUMMARY
First things first: this feels like a very dense book! It has 50 pages more than the other Harper Prism novels, and it really uses all of them! To give you an idea: last week we looked at And Peace Shall Sleep, which had 14 chapters. Dark Legacy has 52, none of them feeling like padding. I quite like that. This is the last Harper Prism novel (Still two anthologies to go before we get to the Acclaim comics though), but the line gets to go out on a high.

So... as the blurb on the back cover mentions, part of this story deals with Yunnie, a human orphan who is accepted into the Urhaalan minotaur community. The minotaurs are at war with the elves of Eln forest, but Yunnie quickly discovers that there is actually a third party involved. These rock/lava elementals, called the Niroso, and their Coal Golem minions, are manipulated by the witch Sacumon to burn down both elven and minotaurish homes, which of course the warring factions blame on each other, exacerbating the war. Sacumon tricks Yunnie into donning a Living Armor, which prevents him from speaking out about all he has seen to his minotaur brethren, as well as transforming him into a berserk warrior to lead them.

And Peace Shall Sleep

And Peace Shall Sleep
Writen by Sonia Orin Lyris
Published by Harper Prism, 1996 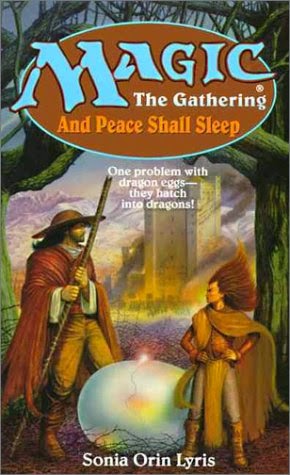 SUMMARY
After eight books of hanging around in settings we have never seen in the cards, finally we go somewhere recognizable! Sarpadia, the setting of Fallen Empires! Reod Dai is a human mercenary who has been paid by the Havenwood Elves to stir up trouble between the and the orcs and goblins. He's been doing that not just by arming the orcs and gobbos and fostering an alliance between the two, but also by, get this: detonating Dragon Whelps all along the border! But then the elves suddenly stop their payment. Now Reod and the three dwarven ladies he bought dragon eggs from are stuck with a cartload of ready-to-hatch dragons. Reod decides to blow the eggs up on elvish territory, to give them a taste of their own medicine (or perhaps to get them to buy him off). While bargaining with the dwarves a seduction spell of his interacts oddly with the fact that Tamun, one of the ladies is in heat (Yes, Sarpadian dwarves get in heat!) and Reod ends up in love with her. So when the three dwarves demand to go along, he can't refuse.
Read more »
Posted by Squirle at 17:02 1 comment:

A Historian's Guide to Elder Dragons

Recently, after years of obscurity, the term "Elder Dragon" has made a comeback on the MTG storyline message boards. First there was the discussion whether Ugin was an Elder Dragon or just an old dragon, and last Monday all hell broke loose when Wizards revealed they were re-appropriating the term for a new cycle of Mythic dragons in Dragons of Tarkir. Since a lot of the sources we have on the Elder Dragons are obscure and, appropriately enough, very old, I thought it would be a good idea to give a little overview of them. That way even new players can know just how much, or rather how little, we know about that cycle of Summon Elder Dragon Legends from the Legends expansion.