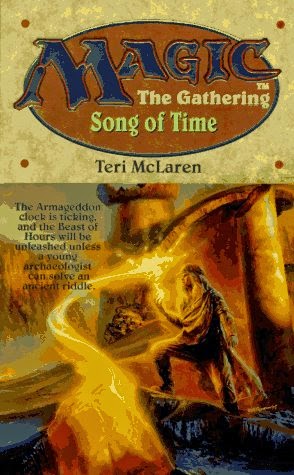 SUMMARY
Our story starts during the Brother's War, where the wizard Mishra leads an army of wizards against his wizard brother Urza's army of wizards! Eh... yeah. This does not fit with current continuity at all, but more on that later. For now all you need to know is that Urza summoned a cockatrice but can't control it. Mishra calls in his elite wizards, a group of songmages called The Cirlce. They try to kill the cockatrice, but there is a traitor in their midst who screws up the ritual, so they can only trap it. Mishra is delighted though, charging the head songmage, known as the Collector, with crafting a song that can release and control the creature. Knowing that the release of the creature will mean armageddon (Yes, cockatrice is the scariest creature ever according to this story), the mage actually makes a song that will use the crystals in a magical valley called the Chimes to kill the creature upon its release. But the traitor in the circle, called the Raptor, comes in and kills him before he can write all the instructions down correctly.

Cut to post-Ice Age Terisiare. The last member of the Circle, an archaeologist named Javin (it seems the Circle has since become some sort of mystery cult, as Javin shows no signs of being a songmage) and his adopted song Cheyne, are excavating a site which they hope is the final resting place of the Collector. They stumble on a corpse of a guy who couldn't pay of his debts with the local mobsters, who just happens to hold a totem with symbols on it similar to a totem Cheyne has. This triggers Cheyne to go and find out the truth about his birth parents. While investigating in the local city of , he befriends a hobo, Ogwater, who just happens to be a down-on-his-luck songmage, and just happens to be in love with the local lady mob boss, Riolla. Ogwater, agrees to guide Cheyne to the Chimes, where the local elves might be able to translate the symbols on the two totems. First they go and buy a map though. The girl selling the map, Claria, just happens to be the niece of the guy whose corpse Cheyne and Javin found, AND just happens to be a descendant of the Collector (unbeknownst to the characters) AND just happens to be the ex of the local ruler, who put her aside to marry Riolla. You are probably already getting my main problem with this book. Anyway, Riolla has Claria's shop burned down. Claria then decides to tag along with Cheyne and Ogwater.
Read more »
Posted by Squirle at 18:53 7 comments:

Ashes of the Sun

Ashes of the Sun
Written by Hanovi Braddock
Published by Harper Prism, 1996 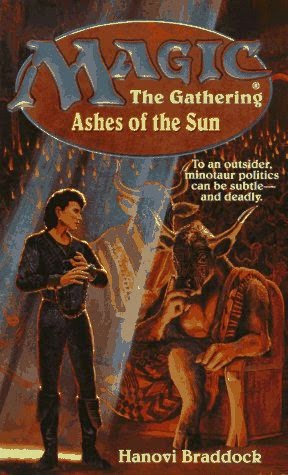 SUMMARY
Ayesh is the last survivor of Onaeh, which was destroyed by a goblin invasion 20 years ago. Ayesh is a pretty big chauvinist, traveling the world and telling stories of how wonderful Oneah was. She now reached one of the most distant, northern reaches of the Domains. There she runs into a local priest who somehow has gotten his hands on an original edition of the History of the Sarpadian Empires. Considering that book must be almost 4000 years old, that is quite a feat. Unfortunately Ayesh learns from it that all the stories people tell about Fallen Empires are incorrect, and comes to the conclusion that her efforts to tell people about Oneah will also, in the long run, be in vain. Distraught, she develops a death wish and goes to get drunk and pick a fight with some goblins. Instead, she is captured by minotaurs from Mirtiin, a nation so annoyingly named that even the back cover misspells it.

After a few chapters navigating the complex politics of the minotaurs, Ayesh puts the puzzle together. The current king, Myrrax, and one of the clan leaders, Scaraya, are drugging goblins and are trying to train them to overcome fear. The idea being that fear is the mindkiller core bad emotion that leads the goblins to lash out at the world. The minotaurs are trying to create a race of new, fearless goblins that would be able to build a civilization for themselves, rather than just raiding the people around them. They hope that Ayesh's knowledge of Onean meditation techniques (Which are very similar to real world mindfulness techniques) will help with that. Being traumatized by the goblin destruction of Oneah Ayesh first tries to kill all the goblins, but she is eventually brought round to the idea when Myrrax suggests changing the goblins would be the ultimate victory of Onean vallues over the goblins.
Read more »
Posted by Squirle at 17:49 6 comments:

The last two books I discussed, Cursed Land and Prodigal Sorcerer, had maps in them. As I believe any fantasy story gets better with maps, timelines or family trees, I thought I'd share them with you. These scans come from the MTGSalvation wiki, since they have much better quality scans than I can manage...

Oh, and I realize I made a mistake last time, the valley inside the Magewall is called TamiNgazin, not Tamigazin. I've edited the Prodigal Sorcerer review to fix this! 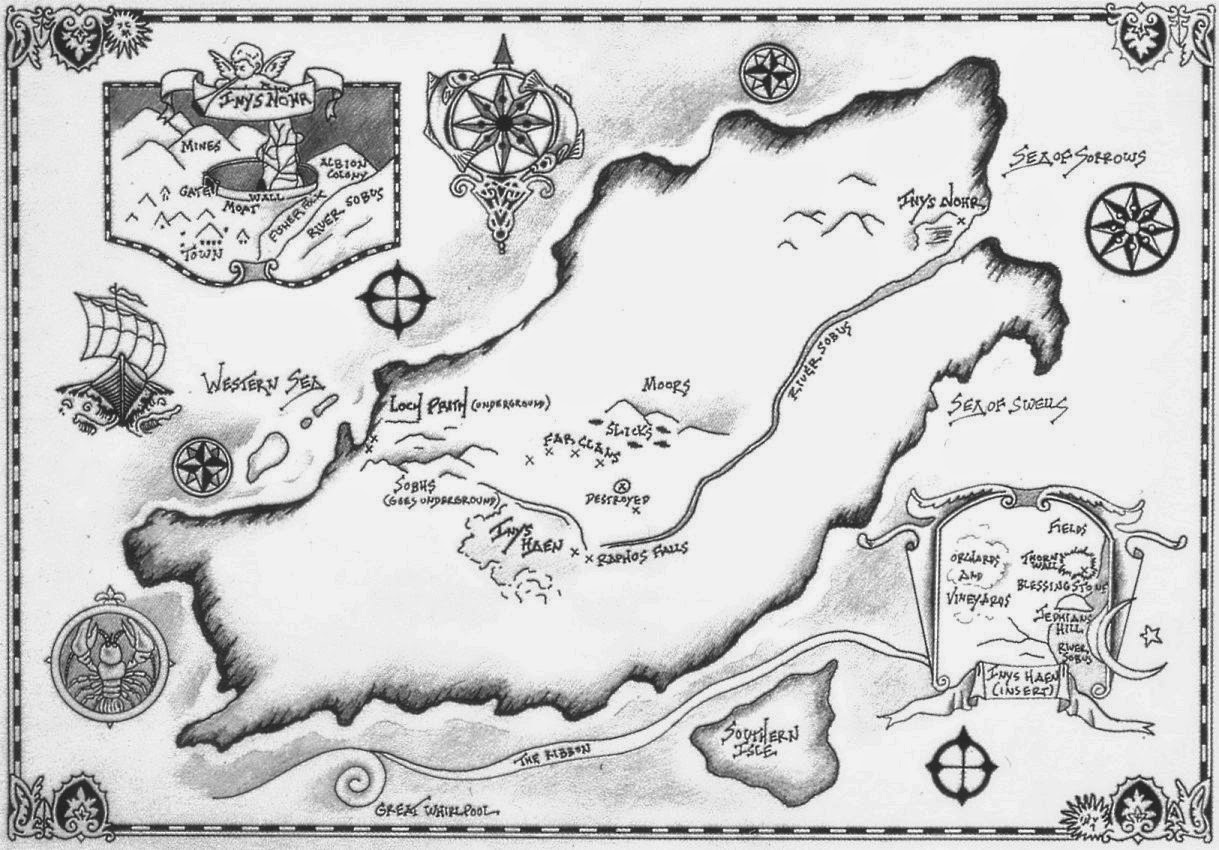 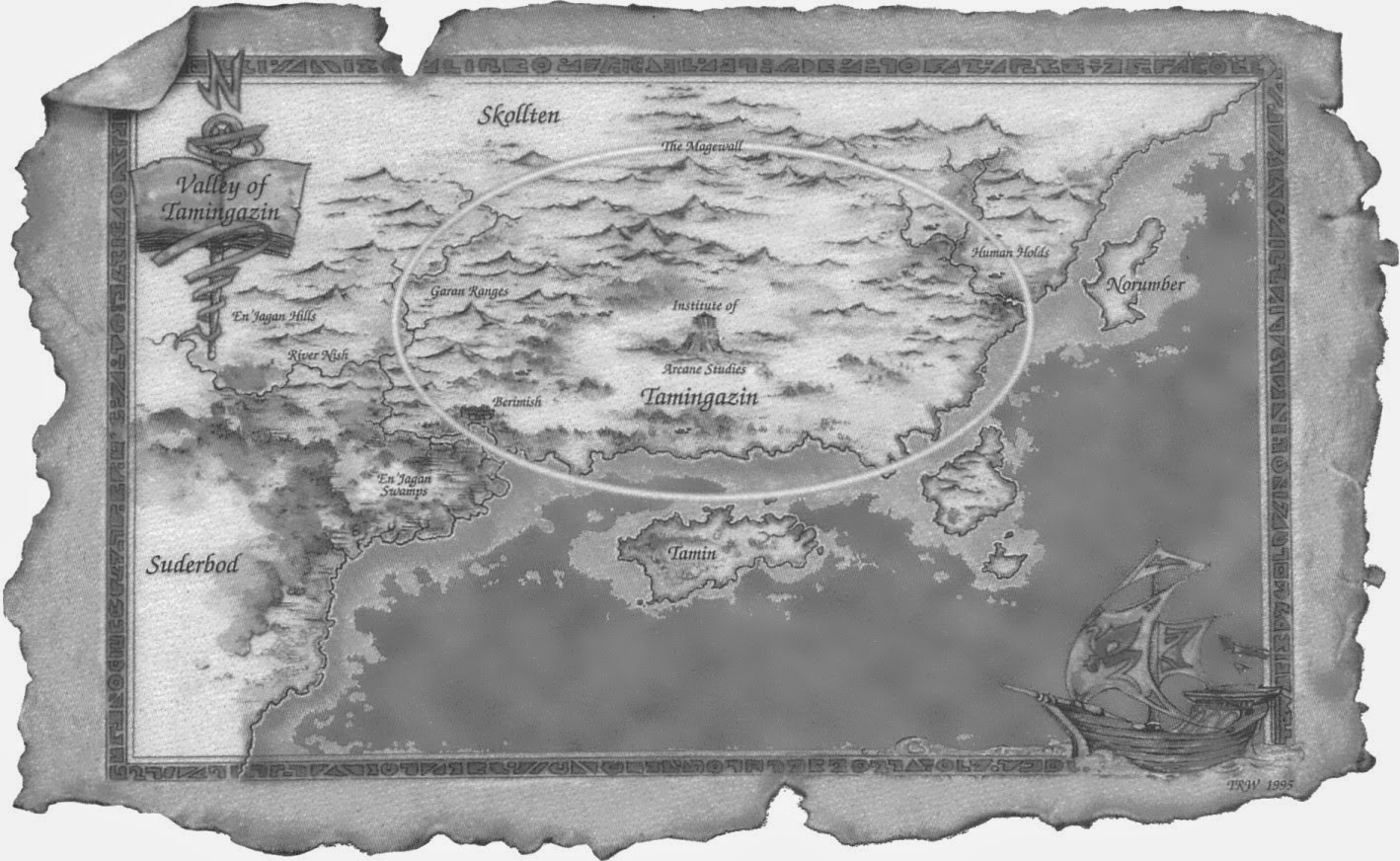 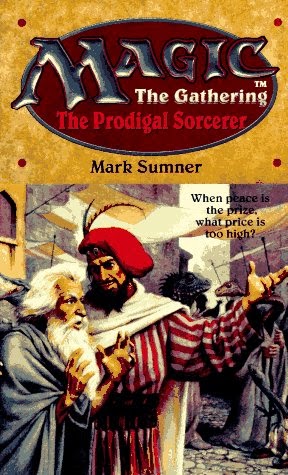 SUMMARY
After last week's excursion to Cridhe we return to Dominaria, but we're still on a place you've probably never heard of: Tamingazin, a valley that is protected from the outside world by the Magewall. This magical barrier makes you move in slow motion, so any invading army can be easily routed by a few archers. The people inside the valley are still waging war on each other though.  The Institute of Arcane studies, which put up the wall centuries ago, has sworn not to interfere with those wars, but when human leader Tagard Tarngold asks for help to defeat one final city without bloodshed, thereby uniting the entire valley, the wizards Aligarius decides to break the rules. He puts all the viashino in the city to sleep, and Tagard marches in and takes the throne.

Our main characters this time around are Talli Tarngold, daughter of the king, and Recin, an elf boy whose mother was exiled from her community and who now lives in the viashino city. Talli is charged by her father to learn the ins and outs of the city, and she enlists Recin’s help. Turns out though that the leader of Tagards elven allies, Rael Gar, wants Recin’s family dead for some mysterious reason. Before that can come to a head , king Tagard is assassinated. His dream of uniting human, elf and viashino was alreay facing opposition from xenophobes on all sides, but now Talli must do everything in her power to keep the coalition together. Especially after she learns that Aligarius has stolen the Magewall Hub and defected to the nation of Suder. With the Hub Aligarius could undo the Wall and allow the Suder to invade Tamingazin while it is in a state of chaos following the death of the king. (The Suder enlisted Aligarius after getting him hooked on drugs they produce)
Read more »
Posted by Squirle at 21:06 3 comments: 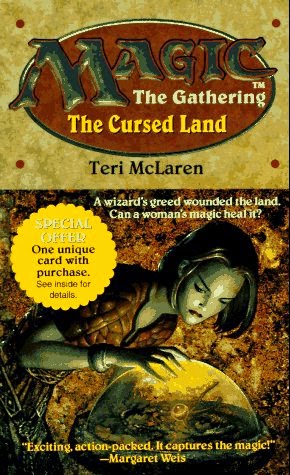 SUMMARY
The Cursed Land takes place on the plane of Cridhe, which only has green mana, provided by one massive tree called the Clan Tree. Our plot instigator is Malvos, a Sangrazul. Sangrazuls are immortals who feed on mana, but who are apparently otherwise indistinguishable from humans. Malvos was in the employ of the planeswalker Tempé, but he got banished to Cridhe after he tried to eat mana she was using. Now he has convinced this guy Nohr to fight his friend Haen, who is the keeper of the Tree, and to do… some vague ritual to the Clan Tree that would transport the Malvos and Nohr to another plane, where Malvos hopes to find other planeswalkers willing to help him fight Tempe. But the plan goes awry for… some vague reason. Nohr kills the Clan Tree, but he and Malvos are still on Cridhe.

Cut to 520 years later and Cridhe is almost dead. Many living things, including horses and trees, have gone extinct. Fungus and disease spread over the land. The clouds are so thick that large parts of the known world are covered in perpetual darkness.nThe people ruled by the descendants of Nohr have become predatory raiders, those ruled by the descendants of Haen hopelessly stuck in tradition. Spring wont even come unless the Keeper at Inys Haen preforms a ritual during the equinox. There is a prophecy though, that when the line of Haen and the line of Nohr are reunited the Mending (no, not that one) will occur, and Cridhe will be restored to its former glory.

The above covers the first 20 pages of The Cursed Land. The following 270 are about Aylith, the young and ineperienced Keeper who gets captured by the forces of Nazir, the last of the line of Nohr. She is then spirited away by Feryar, an elf who works for Nazir, but secretly wants to bring about the Mending. Aylith goes through some sort of spirit quest and ends up back at Inys Haen just as Nazir, who has gone completely crazy thanks to an ancestral curse upon the house of Nohr, is laying siege on it. She cures his insanity, and together they restore the Clan Tree.