It feels good to finally be writing this article. After all, I've been saying one day I would since pretty much the beginning of this blog. So after two years it is high time.

What are we talking about again? Well, way back during the Greensleeves cycle we were shown the destruction of the College of Lat-Nam during the Brothers' War. Recently we covered Jeff Grubb's Ice Age cycle, in which the College continued to exist until shortly after the Ice Age. It's a pretty major revision that intersects with a lot of other ret-cons. There is the nature of the Brothers, the City of Shadows, Lim-Dûl... but while in the cases of the Brothers and Lim-Dûl we simply have to let the old version go and accept the new facts, it's different with Lat-Nam. For starters, there is no book that outright replaces the Greensleeves trilogy. And it would be a real shame to chuck some of the oldest Magic novels out of continuity without a replacement just because some details in the backstory don't match up. Furthermore, while the facts from the two trilogies (and a bunch of other references that were made in between) don't match up, there is so much in-universe time between them that there could very well have been some off-camera events that would explain the apparent inconsistencies. We are talking gaps of centuries or even millennia!

So that's why we are here. To try and find a way to make it all fit together. But first, let's go through all the sources once more, in order of release, to refresh our memory of just what we are talking about. 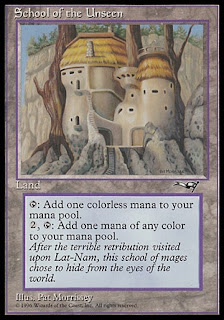 I am going to cover Coldsnap until... I dunno, sometime next year. But there is one thing that happened close to the release of that set that bears mentioning now. Back then there was a post on the MTGSalvation storyline boards where we tried to figure out what exactly happened with the College of Lat-Nam, the City of Shadows and the School of the Unseen. Please don't go and read it, it has posts from 19 year old me in it and it is all very embarrassing.

The relevant bit is that suddenly Brady Dommermuth, then head of the Creative Department, popped in and shared a number of entries from "an ancient database maintained by Pete Venters and others". Presumably it was part of Pete's work on either the coffee table "Encyclopedia Dominia" book, or the Magic RPG he talked about when he was interviewed by Matt Cavotta. It's all unreleased, and pre-revisionist at that, so it is by no means supposed to be canon, but as always seems to happen in the storyline community all the stuff that wasn't directly contradicted by published sources was accepted as fact anyway.

That alone makes this stuff worthy of a look, to know where some of the "facts" thrown around in storyline debates come from. But it is also relevant for that history of Lat-Nam article I keep promising you all, since it more clearly shows what was considered to be canon at one point, and just how much Jeff Grubb changed. Oh, and it is of course interesting, and rather curious, to see just how much unrevealed lore stuff WotC has kept behind the scenes over the years.

So let's jump in and see just what was "secret" canon once upon a time! 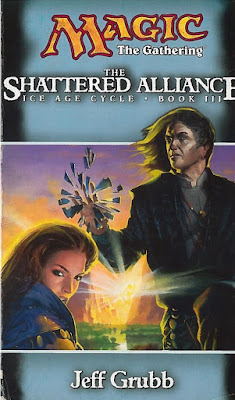 SUMMARY
Slightly less of a time jump this time. It is now twenty years after the World Spell, and Terisiare is a little worse for wear. Regions are being flooded, plagues are breaking out, and politically it is in upheaval. The School of the Unseen has emerged from its seclusion and is aiding where it can. Jodah is now the Archmage Emeritus, letting Gerda Äagesdotter do all the hard work. She wanted a promotion so badly that she sold Jodah out to Lim-Dûl last time, so he's punishing her by giving her exactly what she wants. Furthermore, Jodah is scared of the next time he'll be forced to use his mirror to remove the emotions from his memories, as he feels Freyalise did something with the artifact before giving it back to him after casting the World Spell.

Then Jaya Ballard returns with bad news: she found the mummified hand of Lim-Dûl, but the finger that contained Mairsil's ring is gone. Jodah and Jaya immediately head out to track the ring down, to see if their old enemy has resurfaced again. 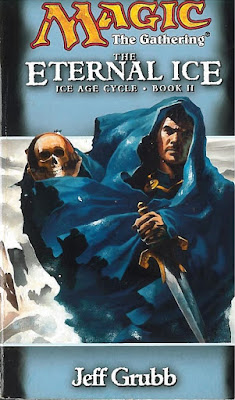 SUMMARY
It is 2500 years after the last novel, and Jodah is summoned by the necromancer Lim-Dûl. Dûl tells him he's been dead for ages, but that he created this summoning since he has need of the best and brightest sages, as well as the skill at organizing wizards Jodah picked up while he headed the City of Shadows. You see, Dûl has been tasked by his planeswalker master Leshrac to research the rogue plane of Shandalar, and he has another research project on the side: he wants to know how to kill a planeswalker.

Before long though, Jodah is saved by Jaya Ballard. Turns out Jodah never died, having become immortal after that weird dip in that fountain last novel. He's still ruling over the City of Shadows, now called the School of the Unseen, as the Archmage Eternal. His second in command Gerda Äagesdotter got ambitious and sold him out to Lim-Dûl, who kept him amnesiac with Fyndhorn Pollen. Jaya calls in a favor from the planeswalker Freyalise, who apparently knew Jodah in the past, to cure him of the pollen's addictive effect, but then Freyalise reveals Jodah is going insane anyway: to deal with the pressure of being immortal he has been doing a ritual every few generations, in which he uses his magic mirror to remove the emotions from his memories. Gerda jumped him while doing that ritual, so now all his emotions of the past 2500 years are catching up with him. Freyalise might be able to give some hints on how to have him survive, but in exchange Jaya and Jodah now owe her a favor. 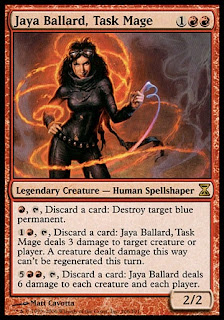 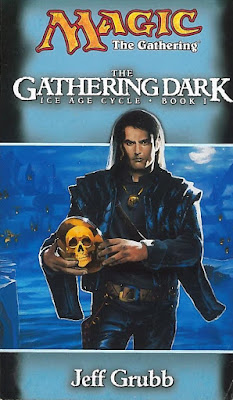 SUMMARY
We are back in the Dark Age, between the Sylex Blast and the coming of the ice, and with that comes intolerance, plague and war. We follow the young wizard-in-training Jodah,who is not having a good time during the first half of this book. First he is captured by the inquisition, who kill his mentor Voska. He flees to the city of Alsoor just as it falls under plague quarantine. He gets a job selling folk cures, but his own magical improvements of the healing balms bring the inquisition down on him again. To flee persecution he joins the army, only to have both his fellow soldiers and the opposing army be slaughtered by attacking goblins and giants. Eventually he hooks up with Sima, a wizard of the City of Shadows, who promises to bring him to this mysterious school to study magic in peace. But then he is kidnapped by merfolk working for the Rag Man, who instead leads him to the rival school called the Conclave of Mages. 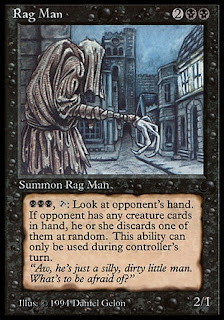