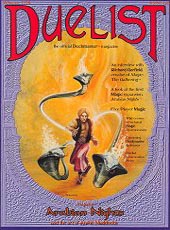 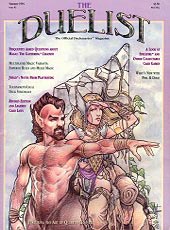 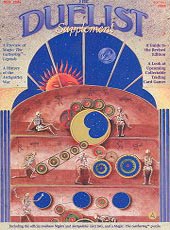 Let me open with thanking the amazing Mike Linneman for providing me with scans of these issues, allowing me to finally complete my look at the pre-rev issues of The Duelist! I'd tell you all to go read his articles over on GatheringMagic.com, but considering the difference in hits between my blog and that site you probably already are.

The main point of interest here is the original telling of the Antiquities story from the supplement, though I'll also quickly go through some interesting sounding stuff from the first two proper issues. Or just the first one really, there isn't any lore stuff in number two.

For the sake of clarity: the supplement is sometimes called #0 or #1.5 online. Apparently there were also versions in 1995 and 1996. I haven't been able to find out much about those, but I'm assuming they don't have lore relevance. The 1995 has a cool cover though.

A HISTORY OF THE ARABIAN NIGHTS, by Beverly Mashall Salling
I'm covering this since the MTGSally wiki lists "a history of the Arabian Nights" as a flavor article, but it really isn't relevant. "The Arabian Nights" here means the real world book, and the "history" is just that: that the 'alf layla wa-layla was first mentioned in the 9th century, that it was translated into french by Antoine Galland, et cetera. It's interesting, but nothing you couldn't get from Wikipedia these days, and certainly nothing with relevance to the Magic multiverse. There is also a short paragraph called "The story behind Arabian Nights", but that's just the story of Richard Garfield reading the Sandman issue based on 1001 Arabian Nights and being inspired to make a set.

Oh, and while we are talking about the shortcomings of the Wiki, it also mentions "Murmurs from Dominia" as a flavor article, but that turned out to be an article that talks about how people like Magic for different reasons. Basically an early incarnation of the Timmy/Johnny/Spike concept.

In the end the Arabian Nights stuff is only relevant for my project in that it proves how little attention was payed to any kind of storyline or flavor at this point. Issue one also contains an interview with Richard Garfield which makes mention of the multiverse and the idea that players are planeswalkers, in the same way the early Pocket Players Guides did. And yet that idea didn't stop him from making a set featuring real world locations and literary characters with no attempt to explain how Aladdin is supposed to fit together with Llanowar or Sengir. The retooling of the set to take place on Rabiah wouldn't happen until the Arabian Nights comic. 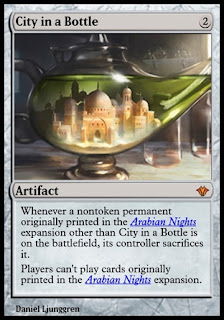 DUEL FOR DOMINIA, by Steve Bishop
Missing from the MTGSally wiki list of lore articles is this little piece of sillyness. It's a... dramatization of the last game of the finals of the GenCon '93 tournament, Magic's first ever sanctioned tournament. The game was played between Rick Townsend and Alex Parrish, called Anton and Karshan here. Here's an old Sideboard article covering the entire thing play-by-play. It's basically just that, only less prosaic.

The "story" is just descriptions of summonings and attacks, with no characterization or humor. There are a few random fantasy words thrown in (the Ki-Tirn Range, Sharnward Swamp, the orcs of Tullor) which I found a bit odd. Why make up new names when you've still got all those randomly made up words from the cards to explain? Looking back from 22 years hence it all works out for the best though. Only talking about the battle and not mentioning any well known Magic names means you don't say anything that contradicts later continuity. And it's pretty funny to see them wring an entire paragraph out of someone playing a mountain, tapping it and casting Mons's Goblin Raiders!

Not sure if I am supposed to take this seriously, but as I'm a completionist I'm just going to slide this right into the timeline, next to the Thomil/Worzel duel from Introduction/Roreca's Tale. There's nothing here that suggests any timeline placement at all, but if I add a big enough qualifier the "present as +/- 4000 years after the Brothers' War" will do.


A HISTORY OF ANTIQUITIES, by Kathy Ice
Now this is what we are really here for! Antiquities was the point that Magic got a real story, and a story that left a huge legacy at that. It's effect on Dominaria was felt in most sets through to Alliances, Urza became the main player in the Weatherlight Saga, and while the influence of Antiquities finally waned after Apocalypse, we still have Phyrexians hanging out in the back of the lore to this very day. And this is its very first outing, outside of the cards themselves of course. So, what's it like?

Well, eh... bizarrely the author has decided to not actually give us a proper story. Like the history of Benalia from the Encyclopedia Dominia, this article is framed as a discussion between historians. One presents her take on the "War of the Artificers", the other interrupts with some objections, and while both admit that they don't know a whole lot of what really happened, each is adamant that the other is wrong. It's a fun format, but I think the Encyclopedia did it better. This one actually ends with the two literally going "is not" "is too" "is not" "is too", which is a bit too childish for me (then again, I am a historian myself, so maybe I'm biased.) Plus at one point the interrupting historian actually mentions Occam's Razor by name, and I'm very much against such specific real world references in my fantasy worlds. It immediately breaks immersion.

While I like the set up, I do wonder why it was chosen. Sure, it fits with the way opening Antiquities boosters was supposed to be like an archaeological discovery, but still... the comics included an article by Skaff Elias, lead designer of Antiquities, which showed that the designers thought out the war in tremendous detail. Wouldn't they want all that work to be known by the public? Perhaps it was done to placate Richard Garfield, who admitted in his intro of Rath cycle art book that he initially had some misgivings about telling an actual story through Magic. Or maybe the East Coast Playtesters just didn't have much sway over the book department. Who knows.

So what are these historians suggesting? Well, for starters of course that the brothers we wizards, as were Ashnod and Tawnos. We already saw that idea hinted at in Final Sacrifice and clearly shown in Song of Time. That is only the start of the weirdness though. We get a discussion on where the war could even have been fought, we get the suggestion that Tocasia may have killed the brothers' parents to get her hands on powerful apprentices, and when it comes to why the war broke out in the first place, we get the suggestion that Urza and Mishra may both have been in love with Ashnod! So yeah... pretty much nothing pertaining to the actual brothers has been retained as canonical. Despite that this "story" could very well still be in continuity, since all the weirdness (except for that namecheck of William of Occam) can be explained by them just having a twisted view of historical events. Reading this article while having just finished The Brothers War is actually quite funny, and while it no longer holds any storyline significance, I can wholeheartedly recommend reading it someday. Especially if you just finished The Brothers War and are thus in need of a chuckle. 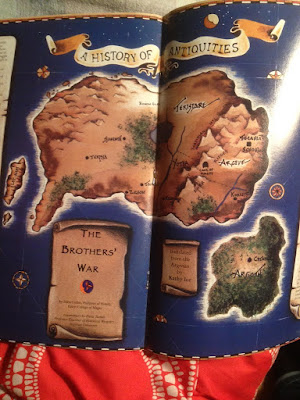 
That's it for today. Now that we know the original version of the Antiquities story it is time to look at the definitive version. So please join me next time for a review I've been looking forward to since the very beginning of this blog. 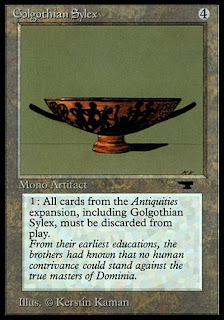