Legend of Jedit Ojanen on the world of Magic: the Gathering #1-2 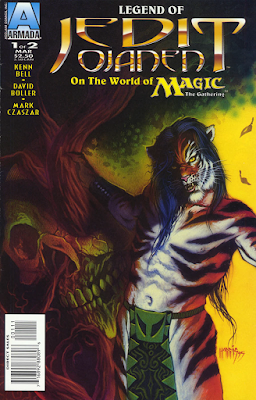 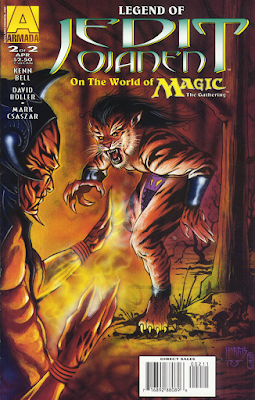 SUMMARY
Jedit Ojanen hails from the isolationist Cat Warrior nation of Efrava. One day he saves a human called Johan from the desert. The other cat warriors thinks they should kill this guy, but Jedit wants to explore the rest of the world since he thinks his disappeared dad may be out there somewhere. He and Johan escape Efrava and join up with he Robaran Mercenaries, which include Adira Strongheart and Hunding Gjornersen. Johan turns out to be the ruler of an evil army out to conquer Efrava (Why the leader is doing his own scouting, I don’t know), but the Mercenaries join up with the Efravans and Hazezon Tamar’s sand warriors and defeat Johan, though Adira dies. Jedit ends up leaving Efrava again  to look for his dad (Even though Johan admitted he killed him, and had an amulet that belonged to the dad to prove it…)
Read more »
Posted by Squirle at 15:07 No comments:

A look at some unpublished comics

The Armada comics line was suddenly cancelled by the Acclaim higher-ups, thus the already solicited Alliances comic never made it to the shops. Which is a shame, as it would've contained a pivotal moment for the overarching storyline. (The Armada comics were published out of chronological order, so we've still got six series to review before we get to the real victims of the cancellation: "Prelude to War" and "The Planeswalker War", which would've wrapped up the series.) Because of its importance, and since we can piece together the main plot of the comic pretty well from the solicitations, the Story of the Battlemage Ravidel and comments from Jeff Gomez, I've decided to give a quick overview of it before moving on with the actually published material.

Let's start with that solicitation. 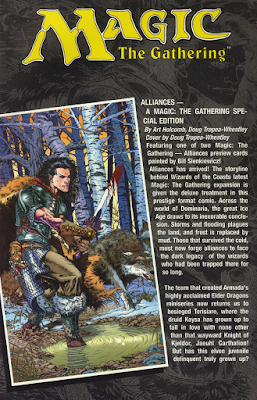 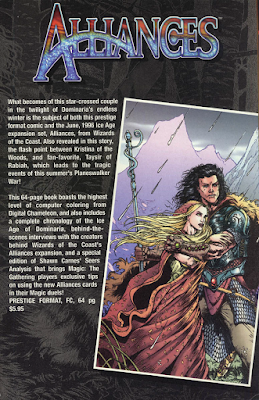 Microprose's Magic: the Gathering (a.k.a. Shandalar)

This review will be a bit different from what you've come to expect from me, as I'm covering a video game this time. Microprose's Magic: the Gathering or, as it is commonly called, Shandalar! Reviewing the storyline here is a bit odd though. There is some story background in the accompanying booklet, and there are some lore snippets here and there in the game, but there is no real narrative to cover. So large parts of this "review" will be more of a summary. I'll speak a little about the game itself, but in the end the gameplay boils down to just playing Magic the Gathering, and reviewing Magic on a Magic lore blog seems pointless. Surely you all already know it is the greatest game ever?

So yeah, weird review, but it's part of the canon so I can't really skip it! Let's get into things. 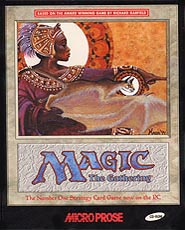 SINCE WE LAST LEFT OUR PLANE...
Last time we saw Shandalar it was being conquered by Lim-Dûl in Kenan Sharmal's body. That story is picked up on in an article in the booklet that came with the game. Which I don't actually own... luckily a nice person over at Phyrexia.com wrote the whole thing down for us! It isn't a long read, but for those in a hurry, I've summarized it below the cut.
Read more »
Posted by Squirle at 14:19 6 comments: 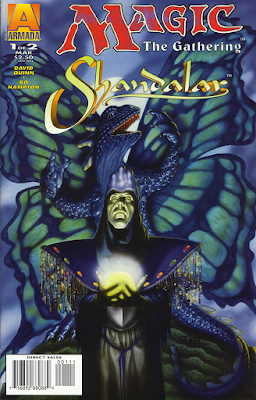 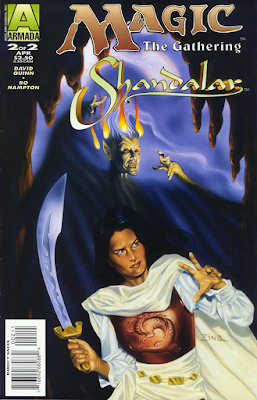 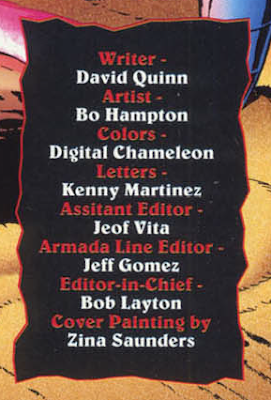 SUMMARY
We start with Faralyn, who is now much more obviously insane, ranting and raving on Shandalar. He immediately gets killed by a Faerie Dragon (It's called an Astral Dragon here, but it's clearly a Faerie Dragon, one of the unique cards in the Shandalar computer game) send by Kenan Sharmal, the local guardian planeswalker. When the dragon leaves, Leshrac pops up, having spied on Faralyn's demise. He wards himself from Sharmal's sight, but finds that the local mana is hard to use. A few weeks later he still hasn't mastered it. Then Tevesh Szat and Lim-Dûl arive, straight from their defeat in the last issue of Ice Age. Szat isn't impressed by Leshrac's lack of progress.