Sorry this installment of Dominarian Annotations is a little late. Real life things came up. I haven't been able to write about the Magic Story Podcasts either, so that's still coming up in a future article, but I did cover the references in today's article, so these annotations will cover episode 9, episode 10 and episode 11 of Return to Dominaria.

Episode 9 was a bit of a controversial one, as it contained a bunch of continuity errors. With all the continuity references in Dominaria one or two of those were bound to happen at some point, but to see a whole bunch of them pile up on top of each other at once is a bit surprising. Let's run through them and see if we can't come up with some explanations for them. And let's not forget about the regular references! 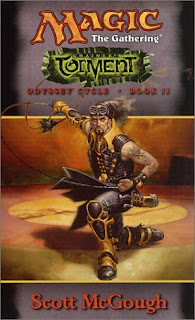 SUMMARY
Our story begins before Kamahl leaves his mountain home and ends a while after Braids makes off with the Mirari, thus the entirety of Odyssey fits inside it, Russian nesting doll style.

We open on a young cabalist named Chainer finding the Mirari in an abandoned villa outside of Cabal City. He feels its immense power, but as his greatest desire is to serve the Cabal, he returns home and hands it over to the organization. Before he can though, he is accosted by some Order soldiers led by Major Teroh, who want to confiscate the artifact. With the help of his mentor Skellum he gets past them and hands the Mirari to The First, the leader of the Cabal, who from then on takes a personal interest in Chainer's development.
Read more »
Posted by Squirle at 10:40 7 comments:

As I predicted last time, the number of annotations for the stories have decreased dramatically now I don't have to explain the backstory of all the main characters. So today, in addition to covering episode 7 and episode 8 of Return to Dominaria, I will also talk about the map that was released alongside episode 1!