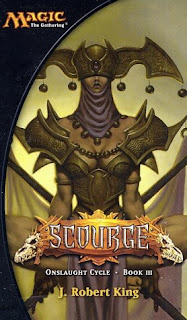 SUMMARY
So Karona has been born and has her proper name now. She flies off into the desert, with everyone at Averru following her in a mad trance. Kamahl is the first to find her and discovers she is a bit of a blank slate, not knowing what she is or what she can do. He then sees the other people arriving and crushing each other in a frenzied attempt to get to their new goddess. She runs off. Kamahl realizes she is an incredible danger, so he vows to go get the Mirari-sword to kill her. Other than him only a few people prove immune to her lure: the numena, the unmen Sash and Waistcoat, and Stonebrow for some reason. He is entranced at first (he just can't follow because his legs are caught under rubble) but when she leaves he comes to his senses and joins up with Averru.

Karona next meets Sash and Waistcoat. After some wacky antics (they are thirsty, so she nearly drowns them, that sort of top-notch humor) the three become friends. Because they are not affected by her she dubs them her prophets. They then convince her to go to the city of Eroshia. There the entire magical infrastructure (streetlamps, cable carts) collapses merely from her presence, but the people worship her nonetheless. Sash and Waistcoat live a life of luxury there, while Karona goes out to explore, leaving chaos and destruction in her wake. She figures out that she can do essentially anything as long as people believe she can. Her prophets test this by having her cause pigs to fly and restoring and re-destroying the Glimmer Moon. At that point another horde of would-be worshipers appears, including a Cabal army headed by Braids. She removes the ground from underneath them, then puts it back, killing them all. 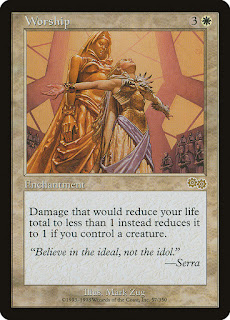 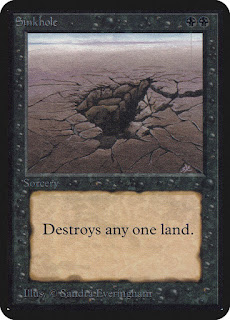 Meanwhile Kamahl enters the Gorgon Mound and retrieves the Mirari-sword, but then the corpse of Laquatus, which has been growing continuously since he was impaled at the end of Judgment, comes to life as a zombie and chases him. Kamahl manages to kill it. While in the Mound he is guided by the ghost of Balthor. Once he has retrieved the sword Kamahl gets seduced by the Mirari again, lashing out and "killing" ghost-Balthor for good. This causes Kamahl to snap out of the seduction and allows him to finally wield the sword in a controlled manner.