When Matt Cavotta interviewed him, Pete Venters revealed that way, way, waaaaaay back when, there were plans for a Magic lore themed coffee table book, called "Encyclopedia Dominia". This was actually the first step in the consolidation of the storylines that would eventually get us from the mess that was the early Harper Prism days, with its wildly inconsistent portrayals of planeswalkers, to the Dominian Chronicles article we looked at a few weeks back, which finally nailed down some rules that would stick for years, at least till the Mending.

The coffee table book that started all this never materialized, but the name Encyclopedia Dominia lived on, as it was used for a part of the Duelist Online website devoted entirely to Magic lore. In fact, quite a lot of the original idea lived on in this site. It featured stories, lore facts (in the form of an encyclopedic list of people, places and objects) and even a framing sequence featuring Taysir, just like the book would have had! Pete Venters also mentions in the above interview that his consolidation of the storyline was continued after the book was cancelled because there was still the possibility of a Magic RPG being made, and I think this website was supposed to tie into that. We will see, when we look at further paper issues of The Duelist, that Pete was still trying to drum up interest for the RPG at this time.

That website, essentially the Ur-ancestor of both Uncharted Realms and the MTGSalvation wiki, is our subject for today. I'll be going through all the stories and the framing sequence one by one, like I did with the stories from the anthologies I covered in... oh jeez, that was March?! Man, time flies! Anyway. That's what I will be doing. As for the encyclopedia entries, there is not all that much to say about them. They are really neat, although sometimes a bit inconsistent in how much attention they pay to a subject. (Freyalise gets one line while the Church of Angelfire gets an entire paragraph?) What's especially cool is that stuff that is essentially thrown in here as random background fluff will remain canon for a good long while. For instance, the Order of the Steel Leaf is introduced here, but after a few years they will suddenly get their own card in Planeshift!


EDIT: Of course, I upload this post and the Archive goes down... luckily some very, very intelligent people decided to re-post these stories over on MTGSally a couple of years back. 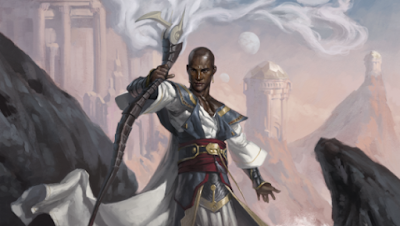 Issue 15 of The Duelist gave a peek into an exciting new area Magic fiction is going to appear in: the internet! A small article urged the reader to also try out The Duelist Online. By now that website has long been replaced, but thanks to the magic of the Internet Wayback Machine we can still take a look. It seems... sparse. There used to be more there though. For example, this little post by the Wizards webteam in which they decry how unclear the legislation is on who can be held liable if they implement a chatbox and somebody says something naughty on it. Oh, and by the way, check out this adorable little search button:

Okay, okay, I'll stop making fun of the early days of the internet. I myself also had a terribly designed Geocities site with a guest book and a visitors counters and everything. It was a site about the game Dungeon Keeper. But let's move on to what I actually want to talk about: the Mirage block storyline!

What I've dubbed "Mirage & Visions Online" is actually a collection of various pages which I believe all first originated on The Duelist Online. First there is this page, which gives a more detailed version of the Mirage story and the Who's Who we saw in the magazine itself. That page was actually re-posted on a later Wizards of the Coast website, which also contained a similar page for Visions. I haven't been able to find the Duelist Online version of the Visions page, but I'm assuming that's where it originated. The Visions site actually went down after WotC moved websites again, but has since been re-re-posted here. We should probably be archiving/downloading this information, since WotC has now moved websites again, and you never know when these old pages dissolve into the aether. (Quick aside: on the website above you'll also see entries for all other sets up to Mirrodin. The earlier sets all just boil down to one paragraph summaries of the stuff found in novels, comics and magazines though, and for the later sets they mostly just give a sample chapter of the novel. These entries will not be covered on this blog. I will cover the handful of more extensive entries, like the one for Tempest.)

The second batch of websites covered in this post are Mirage: Oasis and Visions: the Oracle. These are browser games (originally contests, but I assume they will be closed by now) which Wizards ran for their expansions during Mirage and Tempest blocks. The later ones are basically unplayable these days, but you're not missing much. They just turn short scenes from the story into games. "Help the Weatherlight navigate through the storms of Rath in this flash game!" or "Help Ertai solve this puzzle and open the Erratic Portal!", that sort of stuff. The Mirage and Visions entries actually have some relevant, or at least interesting, storyline information, and as they are much more text based they are still mostly navigable. Lucky us!

Finally I'd like to quickly mention one last page, an online "From the Library of Leng" article on Suq'Ata Assassins. In the last analog entry on Library of Leng (the one on goblins from issue 15) promised the column would continue online, and the Suq'Ata Assassin article says that next month they were going to run their first non-Magic related entry (focusing on Vampire: the Eternal Struggle.) I haven't been able to find any later entries, so either the plans changed or those pages have been lost in time. Like most Library of Leng articles this one just gives a few lore tidbits. It's only 355 words long, so a full review isn't really merited. But I did want to quickly mention it, both for completions sake and because I think this is the only, or at least the first, official source that states the Suq'Ata originated in Rabiah and came to Dominaria via Cyclone portals.

Well, now that you all know what to expect, let's get to it! 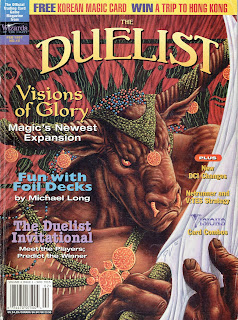 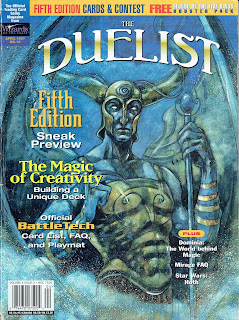 I'm writing this just after the release of Battle for Zendikar, the first expansion of the two-set paradigm. How serendipitous then that I am covering Mirage block, Magic's first attempt at a two-arc story! (No, I don't count Ice Age/Alliances as a two-arc story. Alliances counts as a sequel in my book.)

But these two issues hold more than just the conclusion of the Mirage/Visions story. Issue 16 contains an article explaining planes and planeswalkers, as well as giving us a quick tour of Dominaria. That perhaps sounds fairly innocuous, but it is actually a milestone in Vorthos lore. We haven't seen an article setting down the ground rules of our cosmology since, oh... the very first review I did on this blog, and since then the actual stories, especially the early HarperPrism novels, rather mucked things up with their odd descriptions of planeswalkers. Now we finally get to reap the benefits of the behind-the-scenes consolidation that went on at this time. In fact, the rules established here will remain in place until... today really! Yet the article also makes extensive reference to the HarperPrism books and the Armada comics. It is thus on the one hand the ideal border between pre-revisionist and revisionist continuity, yet on the other a good reminder that this border is much more blurry than it is generally assumed to be.

I hope you all agree that this is pretty exciting stuff, so let's dive in!