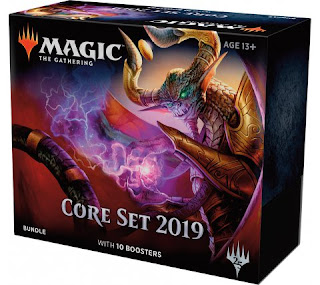 Last time I said I wasn't planning on covering the Player's Guides, just the stories, but you know how it is with new year's resolutions... Consider this review that one glass of champagne on a new years reception before you actually stop drinking for a month.

It has recently come to my attention that the Player's Guides, the little booklets you get with bundles, once again contain story relevant information from time to time. Unfortunately I haven't been able to figure out exactly which ones have relevant stuff in them and which just have info about mechanics and cards. The Dominaria one had some stuff that initially seemed interesting, but it turns out everything in there also appeared in The Art of Magic the Gathering: Dominaria. Well, the timeline in the booklet put the Thran at 5000 years ago instead of 5000 years before the birth of Urza, but other than that one mistake (which fits in a long tradition of moving the Thran about on the timeline) there isn't really anything to discuss now we've already covered the art book.

The Core 2019 Player's Guide is different though. Perhaps it's because there isn't a Core 2019 Art Book, but there is actually some very noteworthy stuff in there. Not a lot, mind you, it's just a thin booklet, but unique info we've never (officially) gotten anywhere else.

For starters, there is an introduction to the Elder Dragons that ends with this paragraph:


"On Dominaria, legends of an ancient Elder Dragon War describe five elder dragons as the only survivors of an ages-long conflict against others of their kind. They are said to have become the ancestors of all dragons, drakes, and wurms on their home plane, and possibly beyond."

This is the very first official source we have about the Elder Dragons being the ancestors of drakes and wurms. Thought widely accepted as truth in the Vorthos community, this info was previously only known through Jeff Lee's fan-website and a Magicthegathering.com Card of the Day entry from 2003 that discussed an unused bit of flavor text for Elder Land Wurm. Interestingly the text here suggests that the wurms are the descendants of the victorious Elders, rather than of the cast-down defeated ones, as those other two sources claim.

Oh, and I should mention that this text once again talks about only five survivors, despite the Dominaria story unambiguously calling Piru an Elder Dragon as well. Luckily it is phrased as "legends describing" the five, so we can just say it is because Piru has mostly been forgotten to history. I guess that is bound to happen when you break an otherwise very neat color-wheel cycle. 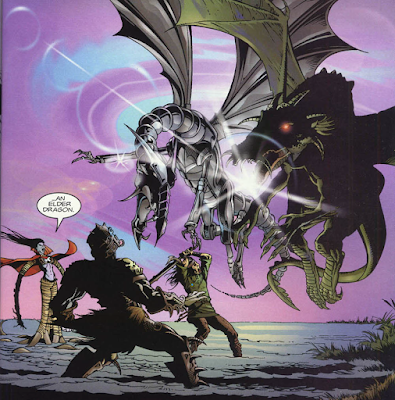 After the introduction to the Elder Dragons as a whole we get two pages on Nicol Bolas specifically and a few little blurbs on the other four Elders in the set. Mostly these cover stuff we already knew. The Palladia-Mors entry is cool because it mentions Chromium putting her to sleep in the Elder Dragons comic. Unfortunately it ends with a fairly vague "When she awoke, her fury was boundless", so we get no confirmation if that last bit in the comic was her being put back to sleep under the ground or actually getting killed. 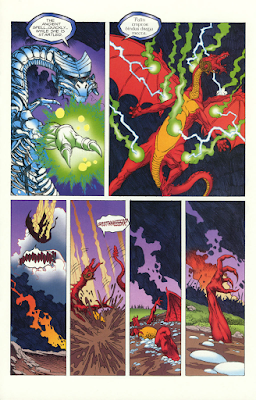 The really significant entry is that of Vaevictis Asmadi. Here we learn that he is the sire of the Shivan Dragons! Back in the early days of Magic good old Shivan was the go to dragon to use in stories, and for old school players they are still one of the most iconic creatures in the game, so to give them an origin story is a big deal! To then hide that origin in a source as forgettable as a booklet like this though.... that is unfortunate. It is really not the best way to get this information out there. For example, while the discussion of Shivan Dragons on the MTG Wiki has been updated to include all the info from the art book, this newly revealed link to Vaevictis isn't!

The rest of the lore stuff in the book is less interesting. We get intro's on the legendary creatures and planeswalkers in the set as well as the five colors of Magic. The stuff on colors and most of the 'walkers is nothing new, just summaries of all their appearances. Well, the Vivien Reid stuff is new, as she was only introduced in Core 2019, but we've already discussed the in the Unbowed review.

The legendary creatures are all new, so their blurbs are the only source of information on them, but they are very sparse.
After that the booklet goes into a Top 10 of the coolest cards in Core 2019 (Volley Veteran at 4? Really?) followed by a visual spoiler of the entire set, and... that's the whole booklet. So yeah, not a whole lot of stuff, but some very significant information which I wish Wizard's would collect at some central place so it doesn't slip away into obscurity. Information from sources like this has a tendency to get forgotten. Think Chandra being from a nomadic tribe, Kaalia being a cleric rather than a little girl, the Onnake being trolls rather than ogres, to name a few examples. This is why I rate these kinds of supplements so low in my hierarchy of sources. It would be a real shame if the same happened to the one official source we have on the origin of Shivan dragons and Dominarian wurms though. If only someone would write a blogpost on it or something...
Posted by Squirle at 20:26