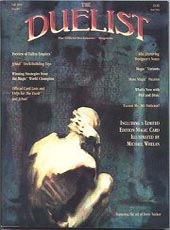 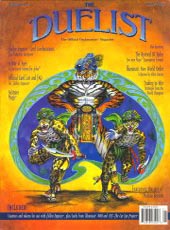 This time I cover the last two issues of The Duelist I had skipped on account of not having a copy of them before. There isn't a whole lot of stuff in here so it will be a short review, but don't worry, I'll be back to the Weatherlight-era books after this!

Once more I must thank Mike Linnemann for allowing me a look at these old issues!

FALLEN EMPIRES
Issue three has the official Wizards coverage of the Fallen Empires story. It's a one paragraph explanation of the situation in Sarpadia, with its various empires and rebellions, followed up with three pages of letters supposedly written during that time. The first letter is from a bunch of besieged dwarves asking the Havenwood elves for help. The elves decline because they are to busy with the Thallid rebellion but promising to send the letter on to the Icatians. The Icatian say they can't help either but will pass the request on to the Ebon Hand.The Ebon Hand do promising help, but the final letter from the Dwarves reveals that the mercenaries they send have joined the attacking orcs. Oh, and there is a back and forth between Vodalia and Icatia in there as well, with the Vodalians asking for medicine and Icatia saying they don't even have enough for themselves. 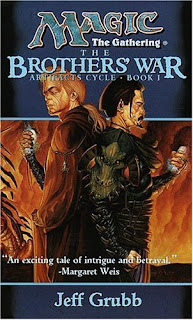 SUMMARY
The Urza-Mishra War comic ended with a meeting between Tawnos and Ashnod, the second-in-commands of Urza and Mishra, so it's appropriate that The Brothers' War prologue starts with a meeting between those two. But where the comic promises an alliance that "changed the course of the war", here it is an exercise in futility. Both of them realize that there is too much bad blood between them and between the brothers to do anything but fight until either side wins. They even think there never was a time when the brothers got along... smash cut to just such a time, over 50 years earlier.