The Colors of Magic 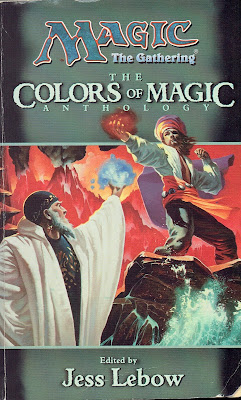 Actually, in the future I do plan to finish the book cycles before covering any anthologies or other books released simultaneously. That's much more convenient when it comes to summarizing and figuring out continuity and timeline stuff. This is something of a special case though. For starters, the Artifacts Cycle is very episodic, with most of Planeswalker taking place centuries to millennia after The Brothers' War and having a whole new setting and cast, save for Urza. More importantly though, The Colors of Magic is supposed to take place in the wake of The Brothers' War, showing what happened to Dominaria after the Sylex Blast. We'll see that some of the writers had very liberal interpretations of  what "in the wake of" means, but since a number of stories do happen directly after the Sylex Blast, and some of them even pick up on the later lives of some minor characters from The Brothers' War, I thought it was best to look at it now, with that story still fresh in mind. 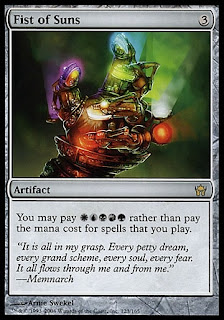 Angel of Vengeance, by Richard Lee Byers
Our first story sees the angle Kotara being summoned by a civic guildmage called Sabul Hajeen. Sabul's brother has been murdered, and he sends Kotara out to kill the murder, who escaped Zhalfirin justice. After that though, he starts having her kill accomplices and relatives of the killer. These evil acts start having their effect on Kotara, who changes both physically and mentally, losing her radiance and her connection to "the Divine Will". Eventually this frees her of her summons, as in the end she is no longer a creature of white mana, and thus unaffected by Sabul's summoning spell. When the family of the killer summons a demon to kill their opponent though, Kotara realizes that even despite her now being a fallen angel, it would still be wrong to let the demon wreak havoc in Zhalfir. Thus she returns and sacrifices her life so Sabul, who has seen the error of his ways, has the time to cast a killing spell on the demon.