The Dragons of Magic 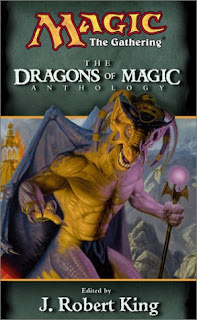 This anthology revolves around the most popular creature type in Magic (and the most popular fantasy creature in general). An obvious choice perhaps, but you might be surprised how little the dragons in this book actually have to do with the card game. But before I get to the stories themselves, some notes on the format of the book.

The book is divided into four parts, with three stories each. These are "Lord Dragons", "Slave Dragons", "Wild Dragons" and "Warrior Dragons". The division doesn't matter much though, and the placement of the stories sometimes seems a little random. What is interesting for us is that each part starts with a small introduction that gives some hints about where the stories fit on the timeline. Future anthologies will develop this further and outright divide their stories into sections labeled "Ancient" or "Pre-Invasion".

Oh and yes, this book gives credit to its cartographer in its colophon! But don't get too excited, it's just the map from Aerona we've already seen in Invasion. Only this time it is just labeled "Dominaria Before the Invasion". A bit odd to include this very minimalist map when many stories in the book happen on locations not on the map (and none of them happen in Hurloon or Shanodin). Still, it's nice to see the creator of the map credited! 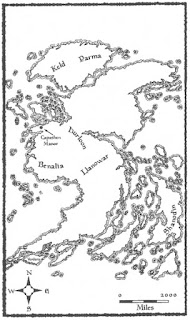