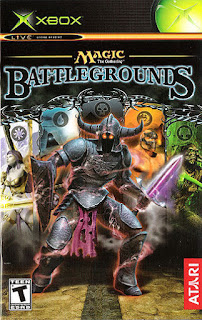 Following our look back at Battlemage, I want to have a short talk about the other Magic-related video game with "Battle" in the title: Battlegrounds. Just a look though, not a full review. In fact, I haven't even bought or downloaded the game, so I couldn't review it if i wanted to.

Why am I being so lax? Well, let's take a look at the story here, which I have been able to learn through Let's Plays on YouTube. All there is to it are a bunch of cut scenes that have been uploaded here. In the game you play the reincarnation (it's kinda vague, but I think that's what it is) of a planeswalker who was defeated in a duel long ago. You must now defeat the minions and slaves of the dude who defeated you to gather the bits of a magic macguffin to regain your power. Those minions and slaves include Multani, Akroma, Arcanis the Ominpotent, Maraxus of Keld, Ishan's Shade and Tsabo Tavoc. The big bad himself? Mishra.

Regulars to this blog should already see the problem here. But for any new readers, let me explain: Mishra died in the year 63 AR. Multani was not born until 2934 AR. Maraxus died in 4204 and Tsabo in 4205. Akroma was created and destroyed in 4306!

So yeah. Any attempt to put this thing into canon is doomed to failure. At best this is an alternate universe. If any of the player characters ever turns up in the main continuity (which I'm not expecting, but weirder things have happened. This year.) we should consider it as just a reference, nothing more. If anyone at WotC does want to do a cool obscure reference some redesign might be needed though. Let's just say the outfits of the female characters might run into trouble with Magic's "no chain-mail bikinis" rule.

So why do I talk about this game at all? Well, there is actually one interesting lore tidbit that came from it, albeit one of very dubious canonicity considering all the weirdness mentioned above.

Either in the game itself or in the booklet (again, I didn't buy a copy just to check) there are blurbs about the various characters in the game. If memory serves most of them were pretty accurate descriptions of the actual lore surrounding them but, as we discussed in the Onslaught block online article, when this game was released Arcanis the Omnipotent did not have any backstory at all... so the developers just made something up! It's not much, but apparently Arcanis got all his powers by visiting the ruins of Tolaria! This revelation was of course shared on MTGNews back in the day, and from there disseminated into the storyline community at large. When MTGNews disappeared from the internet this tidbit of info seems to have gone with it, thought here and there you can still find (non-annotated) references to it, like on this Italian Magic Wiki.

So is it true? Well, I guess it could be. There is nothing that contradicts it. However, since 2003 WotC has really doubled down on the mysterious nature of Arcanis, with him not getting a species in several creature type overhauls and his later flavor text specifically telling you not to think about his origins. So even if it is true, I doubt we will ever get any kind of confirmation. 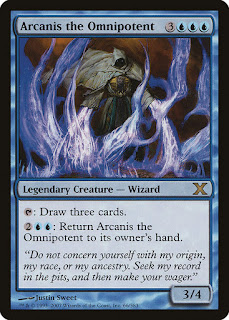 With the rest of Battlemage having nothing to do with the regular continuity I think we can safely write off this origin of Arcanis as well. It seems the collective consciousness of the Vorthos community has pretty much done that already, judging from the fact that I had to look at non-English wiki's to find references to this supposed trip to Tolaria. But you never know when these kinds of factoids will resurface. So if you ever see that origin story pop up again, at least now you know where it came from.

If you see anyone saying that Arcanis is actually Ixidor, or even Jace, claims I found on the MTGSally forums and on Reddit while Googling around for this article... I've got no idea. Some people just have a vivid imagination I guess...
Posted by Squirle at 13:31 6 comments:

Another Look at Battlemage

A long, long time ago I covered the game Magic the Gathering: Battlemage. Or, to be more precise, I covered the lore stuff that was presented alongside it and the very beginning of the game. I didn't go any further because the game is nigh-on unplayable, even if you get it to work on your computer, and because the game does not have a set storyline. The progress depends entirely on your character choice, the way you play the game and the random actions of the AI opponents. So surely nothing in the game beyond the very opening should be considered canonical, right?

Well, that assumption was overturned, like so many assumptions I have made on this blog, with the release of Dominaria. We were already amazed by references to Carthalions, Epityr's history with Sheoltun and what not, when Ethan Fleisher tweeted the origin of this card's name: 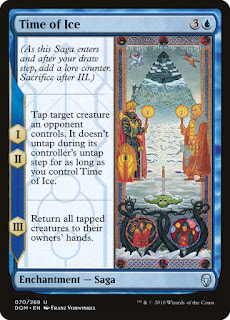 You see, "Time of Ice" isn't just a fancy term "Ice Age". It is actually a reference to an in-universe book, one you can read if you talk a certain NPC in the game Battlemage! Suddenly there is a bunch more stuff in that game that is relevant to continuity!

I was already dreading the idea of having to try and get the game to work and do multiple playthroughs just for those lore bits, but luckily April King is a lot smarter than me and just broke into the game's code to fish out these documents. So let's have another blast to the past and dive into some in-universe books! 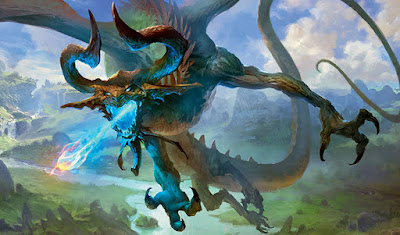 SUMMARY
Eh... do you all want me to do a summary? Doing those makes sense when I'm reviewing 20 year old stories that might be tricky to get your hands on these days, but the story I'm covering today has been released this year and is available for free on MagicTheGathering.com. I suspect most of you have already read it. So I'm just going to drop the link to the beginning of the story... here. You can click on the link to the next one at the end of each chapter. Except for the last chapter, as the link in the second-to-last one is missing for some reason.

Let me know in the comments if you want me to do actual summaries instead the next time I cover something so recent. For now I'm taking the quicker option!