Regular readers may have noticed that until now I've pretty much only been talking about stories, with a handful of articles thrown in. But there is another important part of the Vorthos landscape: settings! In the early days good overviews of those were hard to come by however. Nowadays, whenever we visit a new plane, we get extended looks at the world, the species within it, the main political players, etc. in the Planeswalkers Guides. Back in the day you didn't have those. You'd have the short introductions to the settings in The Duelist, you'd have the sets themselves and perhaps a comic or a novel. If you were really lucky the comic had a bunch of backmatter explaining more. You had to gather it all together yourself, and even if you did so you were always left with a feeling that there was more to the setting than was revealed.


This feeling of there being some kind of "Hidden Lore" was only increased years later when Brady Dommermuth revealed a few bits of information from an in-house document chronicling Dominarian lore, or when in an article on Lorwyn's treefolk Doug Beyer could suddenly talk about characters like Flann, Fionnsutha and Aidar River Span, who hadn't even made it into the flavor text! Clearly Wizards had a habit of making worlds that were far more detailed and elaborate than could be fit into the cards! I've always found it a bit annoying, knowing that until I secure a job at WotC itself, I'll never be able to have a complete picture of all the created lore!

Yet sometimes some of this behind the scenes info comes out. This is what happened with Homelands. Scott Hungerford (The lore junkie behind the set) revealed that he had a document that not only summed up the entire history of the set and explained the setting of Ulgrotha in great detail, but actually came with a list of lore on every single card in the expansion. This document was gifted to MORT (a stalwart of the storyline forums, who you may have seen commenting on this blog) after which it circulated on MTGSalvation and Phyrexia.com, before settling down on No Goblins Allowed, where you can read it in all its glory. 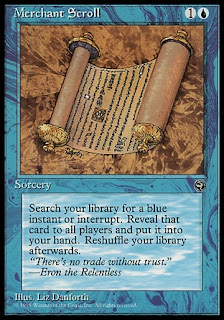 Many people see this as a Planeswalkers Guide to Ulgrotha. Those of you who have clicked the link to No Goblins Allowed will have noticed that "Planeswalkers Guide to Ulgrotha" is in fact the name of the thread in which the document is posted. In reality we are dealing with something else: a work in progress. An awesome look behind the scenes that shows us a snapshot of the creation of Ulgrotha, but not a finished, canonical source. Still, given how tantalizingly detailed it is you can't blame the Vorthosi of the world for wanting it to be canonical. High time thus to take a thorough look at the document, to see what could still be true, and what was dropped between the creation of the document and the release of the set.


OVERVIEW
The document is made up of two parts. The first contains what is essentially a summary of the Homelands comic, and a timeline that matches the one from the comic's backmatter almost word for word. The main difference is to the meeting of the planeswalkers with Baron Sengir. Feroz and Serra are engaged, fight Taysir and then get married "after but a short time" on the plane. Only after that they start exploring the plane further, discovering the dead zone and Castle Sengir, but still not meeting the Baron himself. In the comic they run into that suave vampire the very same day Feroz arrived on Ulgrotha! 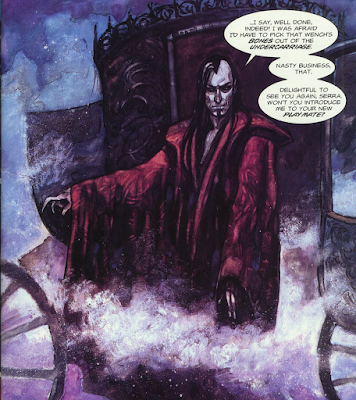 The second part of the document appears to have been created as a guideline for the artists illustrating the set, judging by the notes on looks of people and architecture contained within. Where the first part dealt with Homeland's backstory, this second section deals with the present. It's interest comes from the fact that in addition to the look of the creature or spell they were asked to draw, the artists were also provided with a lot of background information. Reading through these notes it becomes clear that quite a few lore changes were made between the commission of the art and the set's release. Here Eron the Relentless was made immortal by a mage in exchange for heading out into the wastelands, while according to his Library of Leng entry he got the boon in exchange for stealing a book of spells from Castle Sengir. More obviously, the dwarven trader with the counting pony is called Renzel instead of Halina and the An-Zerrin Ruins are called En-Sendra and are supposed to be haunted by the ghost of a planeswalker instead of a group of people killed by Sengir. Most obviously the description of Daughter of Autumn is ended by the following statement: "This being may also be her child, depending on Continuity needs." Clearly we are dealing with a work in progress.

And yet it's impossible for me to just shrug my shoulders and declare the whole thing non-canonical. The information here is just to juicy! The comic and the Library of Leng entries we looked at last week showed us parts of the Homelands setting, but this documents ties it all together. The intricate balance of power in which Koskun and Aysen need each other's produce despite centuries of war, with Autumn Willow and the wizards of the Floating Isle keeping the peace. The dangers to this stability, with Floating Isle apprentices feuding with Koskun Goblin Wizards, Eron wanting to add the power of the Anaba minotaurs to his forces and the troubles in Aysen between the Inquisition on the one hand and the Death Speakers on the other. Baron Sengir manipulating all this from behind the scenes and Autumn Willow faced with the impossible option of destroying all civilizations on Ulgrotha to restore the mana lines and defeat Sengir... This is the story that has captivated storyline fans for years, and most of this can only be found in this document! It's almost evil, presenting us with all this amazing lore, but in a form that is contradicted in so many ways by the official sources!

Now here's a paradox for you all to chew on: the Homelands document shows us an intricately balanced setting, filled with lots interesting characters and even more foreshadowing of a future conflict. It is so tantalizing that over the years hardcore storyline fans have never stopped clamoring for a Return to Ulgrotha block. But on the other hand... finishing the Homelands story would require the use of that thing that Vorthosi fear most: the ret-con. Either to alter parts of the Homelands comic or of the Homelands Document. Most likely both. So this document makes us want to return to Ulgrotha, but returning to Ulgrotha would mean invalidating this document! 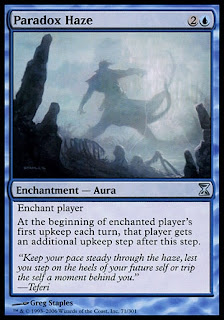 "Luckily" Homelands turned out to be one of the worst Magic sets ever and Wizards has since been avoiding Ulgrotha like the plague. It's thus unlikely that the paradox will have to be resolved. Ulgrotha fans can just import everything they like from the Homelands Document into their head-canon without fear of it ever getting contradicted. Just make sure you double check whatever is in there with what was published in the comic and The Duelist! 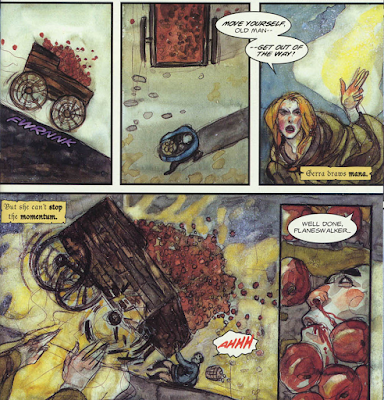 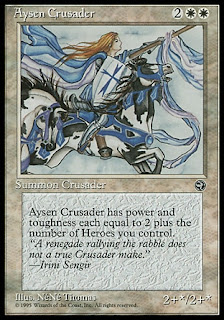 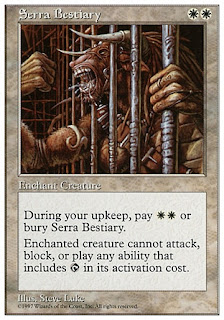 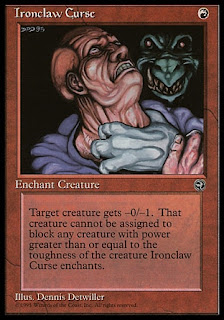 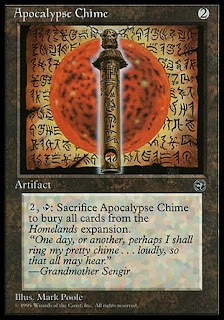 TIMELINE
Despite many of the facts giving in the document being contradicted by other sources, there is one thing that it has made me wonder about: the placement I've given Homelands on the timeline. You see, I went with the interpretation that the timeline given in the comic (which matches the one in the document pretty well) covered the backstory of Ulgrotha, while saying the period allocated for "Homelands" in the official timeline covers the set itself, rather than the backstory. Yet this document very consistently talks about the present day as a short period. It's been 20 years since Feroz and Serra died, everything is already going to hell and there is but a short period before Autumn Willow will no longer have the power to do anything about it. It's quite clear that Hazduhr the Abbot is on his last legs and he's certainly not going to live the 330 years the official timeline gives to Homelands.

Of course, it could be that this, like some many elements of the lore, was changed between the creation of the Document and the release of the set, or ret-conned by the time the official timeline came out, but I'm starting to doubt it. No new Homelands story was released to replace the original, so we really only have this one, which seems to happen in a much small time scale. Autumn Willow's Library of Leng entry seems to confirm the short scale as well.

But that brings back the problem I originally face when trying to put the Homelands comic on the timeline: it takes place over 600 years (counting the prologue) or over 240 (not counting it). Neither dates matches up with the 330 years given in the official timeline. So... back to different length of years between Ulgrotha and Dominaria, or even different speeds of time? Both are possible, but seem to be pretty big leaps to me. Instead I'm just going to say that the 4130 date, the later terminus of the Homelands time period on the official timeline, matches the "present day" on the comic timeline. It seems to be the neatest option and has the nice side-effect of matching the Ulgortha "present day" with the original Dominarian "present day". I will also assume Ulgrothan and Dominarian years are roughly the same lenght, putting the prologue 600 years earlier and the main part of the comic in the 240 years previous. With the qualifiers "probably", of course. And yes, those qualifiers are starting to become nearly omnipresent. Don't worry, we'll get back to actual concrete dates when we reach the Weatherlight Saga! As for the "~3800" starting date the official timeline gives for Homelands... I'm stumped as to what it could mean. I've not had any success in contacting Scott Hungerford, but maybe one day he could clarify the issue.

One final timeline note: In the comic an old abbot and a falconer are featured in the scenes before Taysir duels Sandruu and Feroz, which is 200 years before the present. The abbot isn't named, so we could assume it's Hazduhr's predecessor, or say he's over 200 years old. Odd, but not necessarily impossible in a magical setting. The falconer is explicitly named as Soraya though. Assuming that she is also that old only not showing it seems impossible, especially when compared to Hazduhr's case. So I'd say either Soraya's card is a flashback to an earlier period of Ulrgotha, or maybe Soraya is a common name in Aysen and she's just the second falconer called that. Either option works. 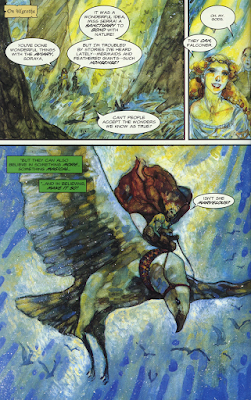