Yesterday I talked about Walker of Night. It gave us a bit more details about Leshrac's imprisonment, but let's be honest, not a whole lot we didn't know already. Now though, we are embarking into true terra incognita. Sure, we knew all along that a Planeswalkers War was coming, and some of you may even have played through it in the Battlemage video game, but what actually happened in that war? the game didn't feature quite a few characters slated to appear in the comic, and in the end didn't have much plot beyond "They fight." Now finally we can see what would've happened in the war if the comics line hadn't been cancelled!

Prelude to War shows the gathering of all the various players, setting the stage for the war itself. It would've been an anthology with a number of stories, each written by different people and featuring one or two planeswalkers, with the story of Jared Carthalion split in two to function as a prologue and an epilogue. I'll deal with each of the stories individually. 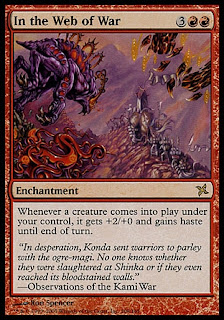 A year and a half have passed since the end of Wayfarer, and a guy only called the Elder Druid of Corondor is looking for Jared Carthalion. He finds our hero quite busy, as his lover Kristina is in labor! Guess that answers that ever-returning question on whether planeswalkers can have kids! But the druid, who reveals he also has the crescent-moon Mark of the Elder Druid, has come to prepare for war... 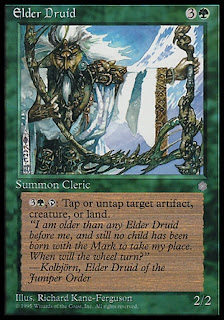 Ravidel pays a visit to Urborg to visit the local planeswalker... Lord Windgrace! Yes, the cat person who we heard about in the Loot Niptil stories from Tapestries and Distant Planes almost made his first appearance in 1997! As it turns out he had to wait till 2000's Invasion for that, and till 2001's Planeshift to actually show his mug on a card! Anyway... back to the story

Ravidel tries to convince Windgrace to join his side in the coming war, telling a twisted story painting Jared as the bad guy. It falls on deaf ears, as Windgrace turns out to be an isolationist. He reveals his ancestors came from Efrava, and that he has a rather negative interpretation of the Jedit Ojanen comic, focusing on the fact that Jedit became a mercenary after leaving Efrava. He takes the very green stance that things would probably work out best if planeswalkers would stop trying to intervene. Ravidel leaves, not having been able to convince the panther warrior. He has taken a chunk of Urborgan obsidian with him though. (Seems innocuous, but it'll come into play in Planeswalkers War.) 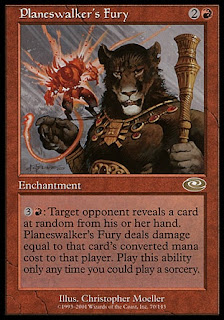 The Swamp King
By D.G. Chichester

The Lord of Khone Keep, aka the Black Knight, aka Sir Knight, aka "The Black Mana Guy" that has been popping up since Shadow Mage but never got a proper name, is having a war council meeting, when suddenly Freyalise drops in. She has come to protect Corondor, since she recognized that the Mox Beacon would soon summon a great danger - Tevesh Szat.

Freyalise and the Knight summon Sol'Kanar the Swamp King and bind him. Now any black magic Ravidel used will flow to Freyalise (Get it? Cause "Whenever a player casts a black spell, you gain 1 life."), giving her more resources to fight Szat with. She tells the Knight to tell Jared she would come to visit him soon to repay the debt she owed to House Carthalion.

"She had chopped hair, wore an eyepiece over one of her eyes, and floated slightly above the ground."


"I see your soul... and now I see why you hide it behind black metal. I... understand. A soul like yours could never fail. Don't worry Knight. Your secrets are safe with me." 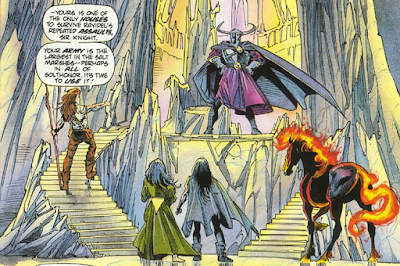 Eskil the White is hanging out in the White Woods. Apparently he still feels he is not redeemed for the crimes of his ancestor Xarl, from Fallen Angel. Dude, that was more than 4000 years ago! And it wasn't even you doing anything bad! He senses coming danger and thinks that might be his shot at redemption. Then all of a sudden his hut explodes. The Ash Warlord Embereck has been dragged to Corondor by the Mox Beacon and Eskil is the first planeswalker he found. In typical red-mage fashion he jumped to the conclusion that this is the guy who summoned him.

To protect the Woods, Eskil transports the two of them to the islands of New Argive, which Embereck mentions he recognizes. Eskil manages to defuse the situation and gets Embereck to talk. The Ash Warlord explains that he recovered the Golgothian Sylex from a sunken city nearby, and dueled Ravidel there. Embereck won the battle, but Ravidel pleaded for mercy and told a sob story about how he was dishonored and wanted the Sylex for revenge against those who hadn't allowed him to die. This convinced the more powerful 'walker to hand it over.

Eskil is touched that a brute like Embereck could act on mercy (Although giving a man who just admitted that he would rather have died the magical equivalent of an atomic bomb is a strange way of showing mercy in my book...), but then takes the two of them to the Mox Beacon, telling Embereck that it was actually Ravidel who created it, and that Embereck himself has thus played a role setting up the coming war. Yet he also reveals that Jared has destroyed the Sylex, allowing the Ash Warlord to finally stand against Ravidel. Embereck agrees, though he darkly says that had he taken the Sylex that day, Dominaria wouldn't necessarily been a better place. 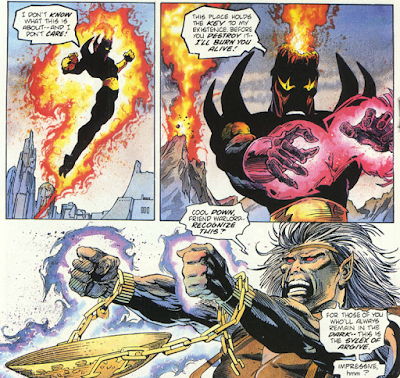 Planeswalker in Amber
By Jeff Grubb and Rags Morales

Daria sits on the Null Moon, waiting for Taysir to arrive. She's been monitoring events since her appearance at the end of Wayfarer. Unfortunately for her, two other planeswalkers have also chosen the Null Moon as their first stop on Dominaria. Two planeswalkers who have a history with this place. Two guys who are the absolute last people you'd want to run into as an upstart 'walker, especially one with ties to Taysir: Tevesh Szat, the Doom of Fools, and Leshrac, Walker of Night.

Szat is perfectly willing to kill Daria just because she spied on him, but Leshrac warns that this will draw Taysir to them immediately and that he needs some time to prepare for that fight. So instead he puts the girl in an Amber Prison. With that done, Leshrac proposes conquering the world for old time's sake. Szat has a different idea though. He will pick up where he left. "By the turn of the near ssstar Dominaria... will die." 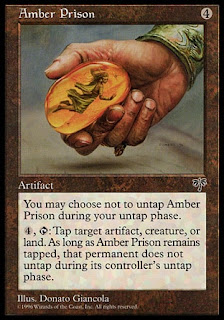 We open on Sandruu, Ravidel and Grenfell Mor having a scuffle. Ravidel tells the others to hold, saying that their battle was a misunderstanding. Ravidel tries to flatter Sandruu and says that he would be a great ally against Jared Carthalion. Sandruu has no interest in getting involved at first, but then Ravidel reveals that Jared has hooked up with Sandruu's former lover, Kristina, even showing the minotaur out of context images of the scene in Wayfarer where Jared and Kristina are in bed together! (Jeez, what a creep!) Obviously this is enough to send Sandruu in a rage, as Kristina has been on his mind the entire journey home from whatever distant plane Taysir banished him to. Sandruu heads out to find Jared, while Ravidel gloats to Grenfell that this is how you build an army. 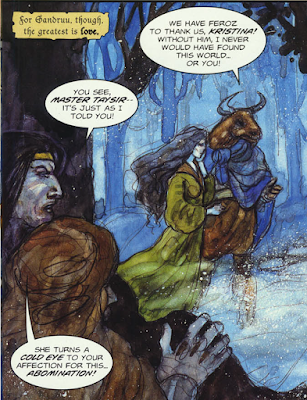 Finally we turn back to Jared and the Elder Druid. They discuss the coming war, but the druid also tells Jared that he must choose between "the land" and "the stars". Turns out the Elder Druid knows he is not long for this world. The crescent moon mark means Jared could follow him as the next Elder Druid, but if Jared sticks to being a planeswalker that can't be the case. So even with the war brewing, Jared has a big personal decision in his future.

Here we finally see Jared's crescent moon mark coming into play, setting up a new personal challenge for him. Quite serendipitous that thanks to some scheduling issues I ended up reviewing Feast of Kjed, which most heavily features the mark and the Elder Druids, just last week! This plot had clearly been planned since the very first comics published (Shadow Mage and Ice Age), but up to now it had only been alluded to. It's fitting to see it coming into play prominently in the big climax.

The stage has been set, the beacon lit, and now the players have arrived. I hope you will all join me later this week for the big finale, plus a discussion on how much of this can actually still be in continuity.
Posted by Squirle at 20:00