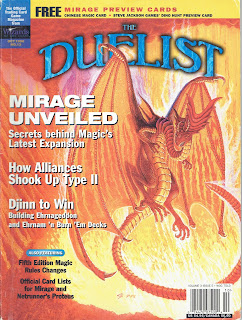 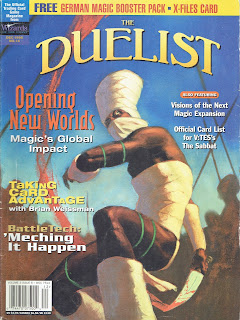 So far this blog has seen quite a bit of repetition. We covered Ice Age and Alliances in both comic and magazine form, the Planeswalkers War as computer game and as unfinished script and Fallen Empires as comic and as novel. Had I had access to the earliest issues of The Duelist we'd also have covered Antiquities twice and Fallen Empires three times! That's the result of having a novel line, a comics line and a magazine simultaneously I guess. But we are now finally moving into new territory!

Mirage block was a strange era for the lore. On the one hand the continuity team was working hard to integrate the various parts of it. The Viashino from The Prodigal Sorcerer make their first card appearance here, and both the continent of Corondor and Eskil, from Fallen Angel, are featured in the backstory of Mangara, although neither made in into the flavor text. On the other hand we are in the strange Sargasso after the cancellation of the Harper Prism and Armada lines, but before the start of the Weatherlight Saga. This meant that Mirage and Visions became the earliest expansions to have neither a comic nor a novel to their name. (Actually, Alliances had that "distinction" until the release of The Shattered Alliance.) The next sets to have neither are a long time off: Coldsnap (which only got a short story) and then Innistrad!

So did these poor sets at least get extensive coverage in The Duelist? Ehm... not really. Not much more than Alliances. They did get a bit more love online, so next week we'll look at the Mirage: Oasis game and the coverage of Mirage and Visions on the old version of Magicthegathering.com. For now though, another light entry, looking at just the stuff that made it into the printed version of the magazine. 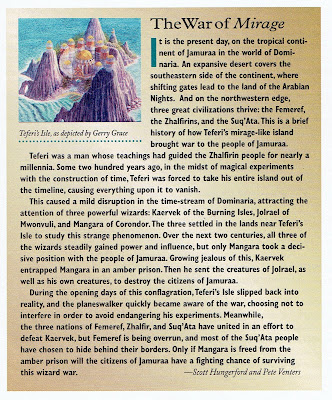 SOME OTHER INTERESTING BITS 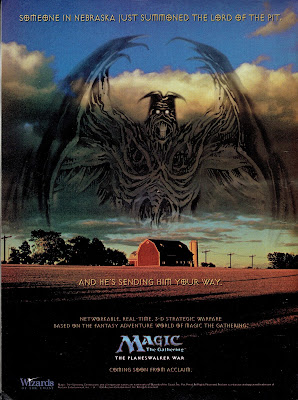 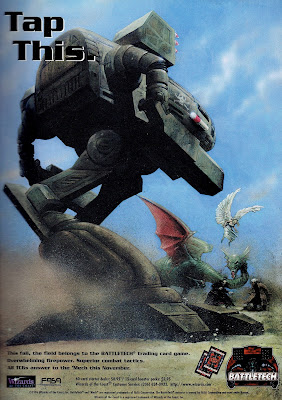 And that's it for today! Join me next week for the digital version of the Mirage story and the next two issues of The Duelist, covering Visions!
Posted by Squirle at 17:11