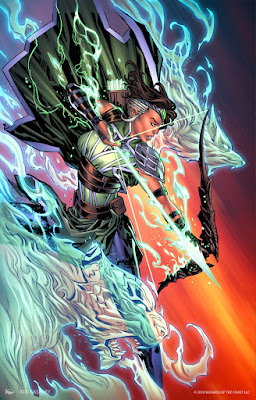 Return to Dominaria and Chronicle of Bolas have dragged this blog into the present day and I found that I quite liked writing stuff that is more relevant to the current Vorthos discussion. So I think I'm going to try and do more reviews on newer stuff, alternating between covering recent stories and older material. It's going to be a bit of an adjustment, as I can't do my usual deep dives into continuity for these stories, not having analysed the Gatewatch era as thoroughly as the earlier periods of the storyline, but on the plus side, if recent stories start referencing older continuity (say, the plane Cabralin, to name a completely random example) it will be good to cover that on the blog in a timely manner, rather than just pointing it out on twitter.

Since I'll also need time in my schedule to continue reviewing older stuff (I want the review of Nicol Bolas's first appearance in Legends II out before the conclusion of Bolas's story in the third Ravnica set at least) I will not cover every single recent source. My plan is to do reviews for the actual stories as soon as possible after they wrap up, but other sources, like art books, player's guides, roleplaying supplements, and whatever else WotC decides to release next, will have to wait until I a) get my hand on them and b) have space in my schedule for an extra review.

So, new year, new direction! Let's see how it goes! First I'll have to catch up with everything released since Chronicle of Bolas, starting with Unbowed, the Vivien Reid story.

SUMMARY
The story can be found through the following links.
For those who prefer me summarizing things: Vivien Ried visits the vampire kingdom of Luneau on Ixalan and is horrified by its treatment of the local wildlife. When she tries to save a monstrosaur during a gladiatorial battle she gets captured. The vamps try to get the secrets of her Arkbow out of her, but she escapes and causes all the zoo animals to stampede and destroy Luneau. 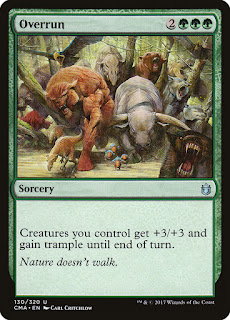 REVIEW
While reviewing the most recent Magic stories I noticed something weird. Dominaria felt rushed at 12 chapters, Chronicle of Bolas was perfectly paced at 8, and now Unbowed feels drawn out at 3. It's just coincidence of course, but I thought it was a funny pattern when you put them next to one another.

So, with my cards now firmly on the table, what do I mean by a drawn out? Well, there are actually several ways in which the story feels rather padded. The prose can feel a bit overwritten, everything described down to the last detail. Additionally, there are scenes that ultimately add very little to the overall story, especially in the middle chapter with Vivien's various interrogations and her exploration of her cell. Finally several scenes feel a bit redundant. A good chunk of the first chapter is devoted to showing just how horrible Luneau is, but did we really have to see her response to the zoo AND the museum AND the gladiatorial battle? Or after spending so much time building up to the stampede from Vivien's perspective, was it really necessary to do the whole thing again from the viewpoint of the local populace? All this taken together made the story feel slow and repetitive to me. 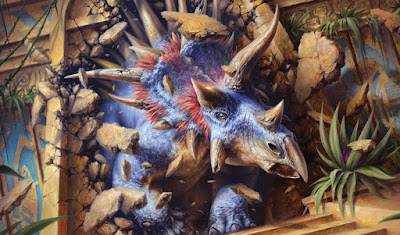 The long build up to the conclusion also caused my expectations to be raised a bit too much. With all the questions the vampires where asking Vivien I was expecting a big reveal about the nature and history of Skalla, tied into Nicol Bolas destroying the plane, but nope, she just gets the bow back, we get a little bit of explanation on how it works and that's it. We learn more about Skalla from Vivien's planeswalker profile than from the story itself. As a result the story ends up feeling a bit... place holder-y? Perhaps people where complaining that Magic kept introducing planeswalkers only to do nothing with them, so WotC decided to put out a story for the newest addition to the roster but deliberately didn't give too much details about her backstory, so they can fill it out if they ever need to give her a more prominent role? Then again, that would also be kind of strange considering her main enemy is Nicol Bolas, whose story is supposed to be wrapping up this year... who knows, maybe I'm way off base with my speculation. All I'm really trying to say is that at 3 chapters it felt like this story could carry some more weight. A simple "Vivien gets mad at some vampires and causes a stampede" story would have benefited from a punchier done-in-one format.

The story is not all bad though. We get some good characters and the setting is great. I really like the idea of a vampiric pre-revolutionary France, and there are some lovely details in here, like the opening scene of a sauropod's neck sticking through the porthole of a ship, or the reference to a version of the Pamplona bull run with raptors. Ultimately it's a decent three parter which leaves me with the feeling that it could have been a great one shot. 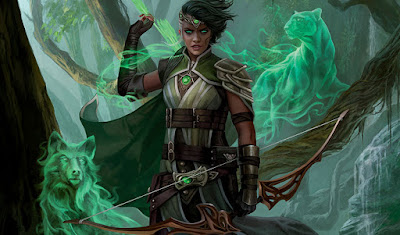 Finally, I should quickly mention the criticism that has been leveled against the story that Vivien's personality doesn't match what we saw of her in the flavor texts of Core 2019. Honestly, I think that it depends on what flavor texts you are looking at. What we see of her here matches the sentiment of Bristling Boar and Giant Spider quite well, but fits a little less with the flavor texts of Gigantosaurus or Prodigious Growth. Thing is though, the whimsy of those latter two are much, much more memorable than your average flavor text, so I get why people gravitate to them and are thus disappointed that they didn't match the Vivien we saw in Unbowed.

Continuity-wise I don't see a problem. The happier sounding Vivien could just be her in a more joyful setting than Luneau. Perhaps they were from her time on Skalla, back before it was destroyed. Brand management-wise though? I think WotC could do well from leaning in to the more happy go lucky portrayal of Vivien, as there is clearly a demand for a more lighthearted planeswalker.

...or at least, that's what I had written before I had gotten my hands on a Core 2019 Player's Guide. (Expect a very short article on that soon). That booklet contains a profile on Vivien which ends with the following paragraph:


"Refusing to lose herself in grief, Vivien has become a guide to the forests and animals of the Multiverse, enthusiastically introducing others to the marvelous diversity of nature."

...now compared that to her entry on Magicthegathering.com, which says:


"Vivien has a new mission: destroy the cancer of civilization. Skalla's fate solidified her belief that either you stand with her-or you are her enemy."

The flavor texts have so little context to them that I can explain away the conflicting tones, but the contrast between these two profiles is very striking. Putting them side to side makes it seem like Vivien has some really violent mood swings. "Come look at all this lovely nature! And if you don't like it... I'll kill you and your cancerous civilization!" I'm guessing there was some retooling of the character late in development, after the flavor text had been written but before Unbowed was commissioned. Too bad that the Player's Guide's profile wasn't changed as well.

With both versions of the character already out there Vivien's next appearance is going to be called a ret-con whichever way WotC decides to go, so they might as well bite the bullet and go for the version the fans prefer. 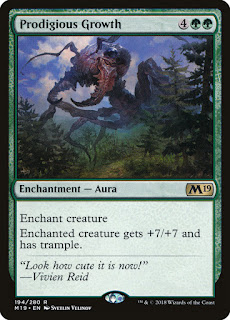 No real trivia or continuity for me to discuss this time, so let's move straight to the...

TIMELINE
Vivien is able to leave Ixalan at the end, so this takes place after Tezzeret removed the Immortal Sun from the plane in the Rivals of Ixalan story. It can't take place before Ugin and Azor dropped the Immortal Sun on the plane in the first place as we know from the Ixalan artbook that this predates the formation of the Legion of Dusk, who are present in this story. Oh, and a story set that far back in time would mean Vivien would be a super-powerful pre-Mending planeswalker, which she clearly isn't.

We can't get any more specific than that, at least not until future stories are released with more timeline info. For now I'm going to assume it happens in 4560, just like the other non-flashback stories released last year, but it could easily happen a few years later, so don't get too attached to its placement on the timeline in case future stories interfere with it.
Posted by Squirle at 20:53