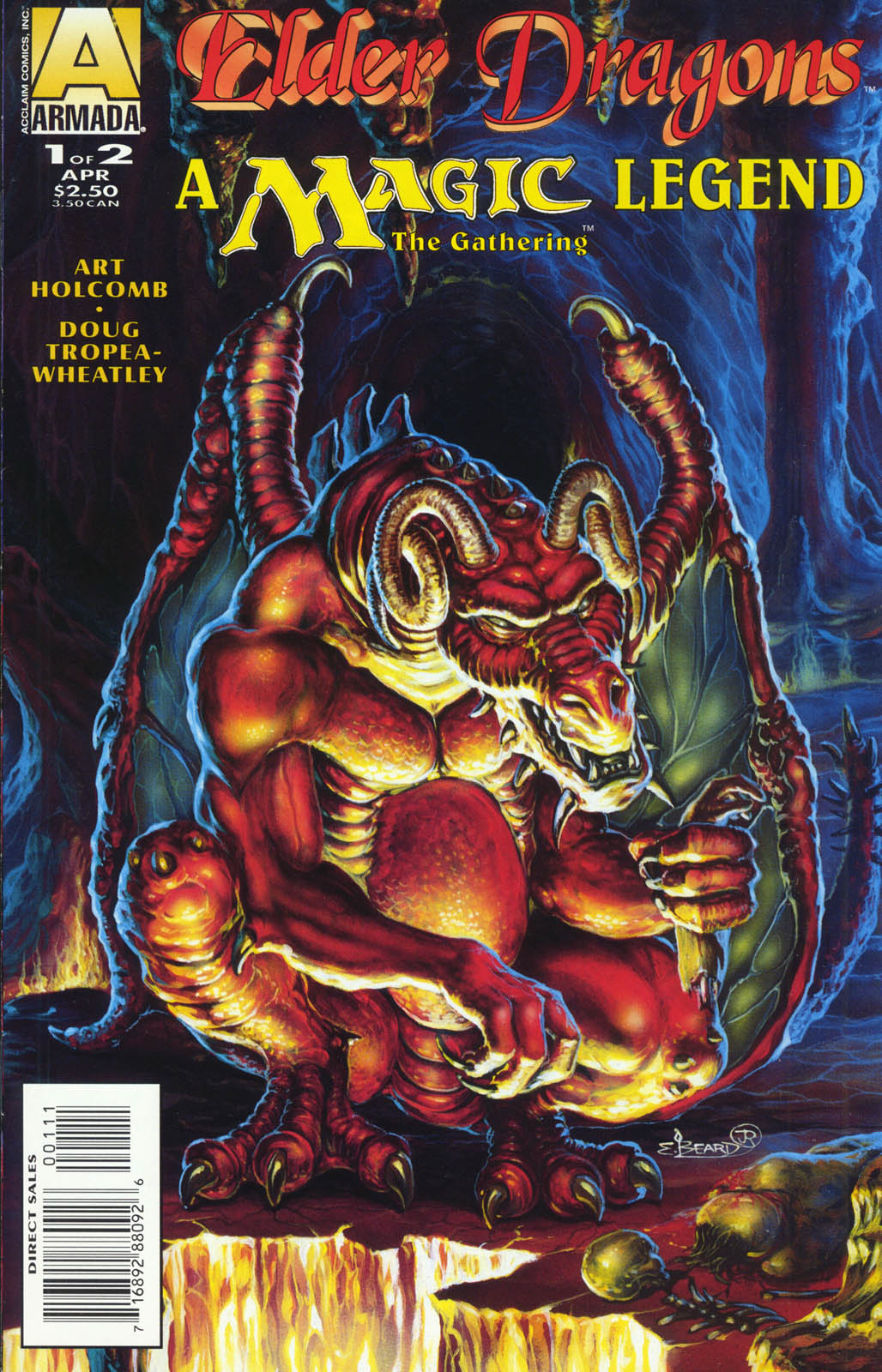 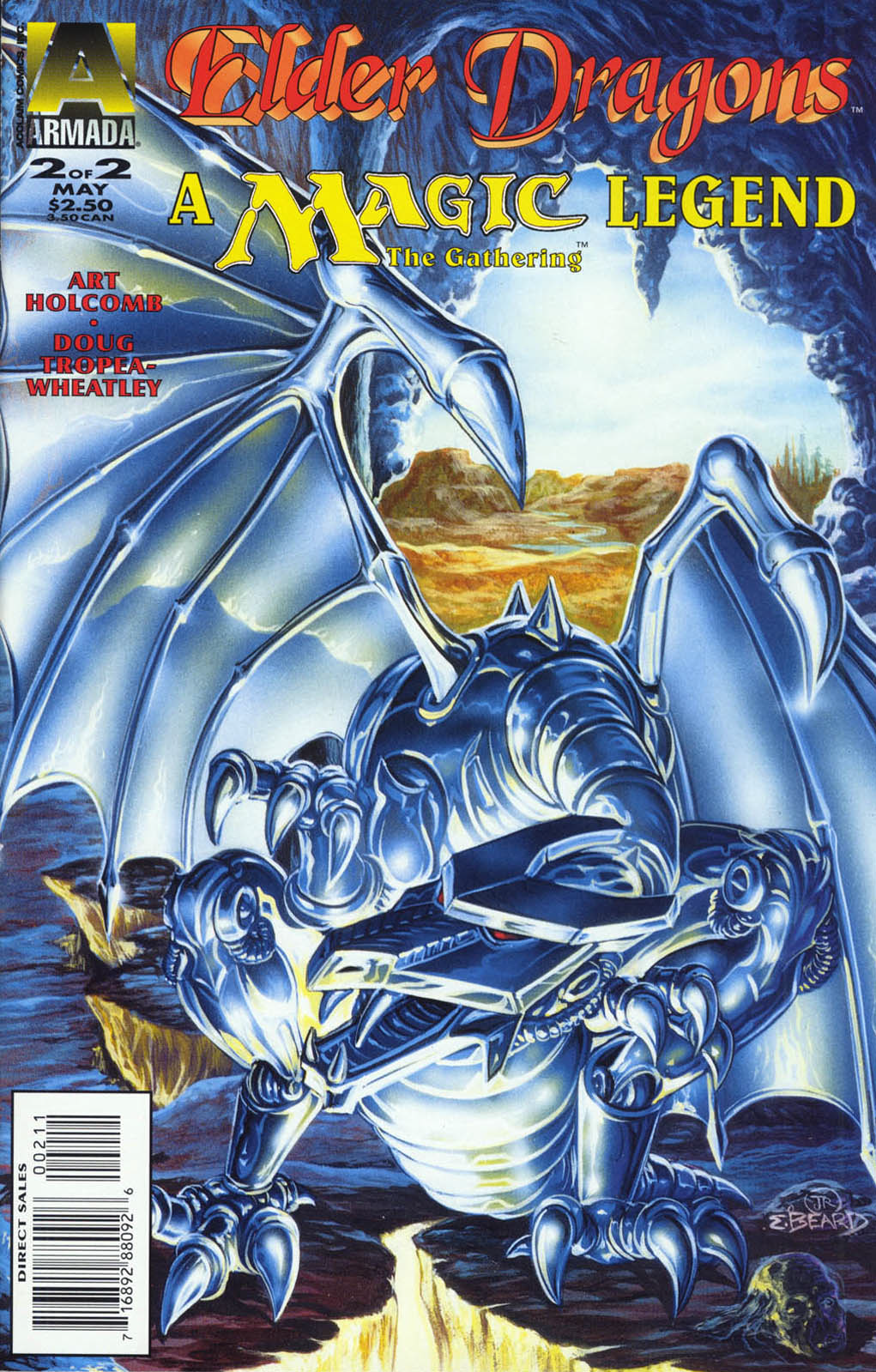 The Dragon Whelp reveals he’s actually Vaevictus Asmadi (Called Asmodi in the comic). He’s been manipulating Donald in order to awaken Palladia, needing her to lift the curse that turned him into a whelp. Palladia does so, and together with an army of zombies and orcs the two Elders start wreaking havoc.

Throughout the chaos Ham, the guy who’s been doing the Tickery for years, has been acting strangely. He refuses to hurt Palladia, and pushes away Ad’amra, Donald's daughter who has fallen in love with him. In the climactic battle the town wizard forces Ham to reveal his secret: he’s actually Chromium Rhuell! Chromium convinces Vaevictis to turn on Palladia, but Palladia easily dispatches of him.

In the end Chromium manages to put the sleep-spell back on Palladia. 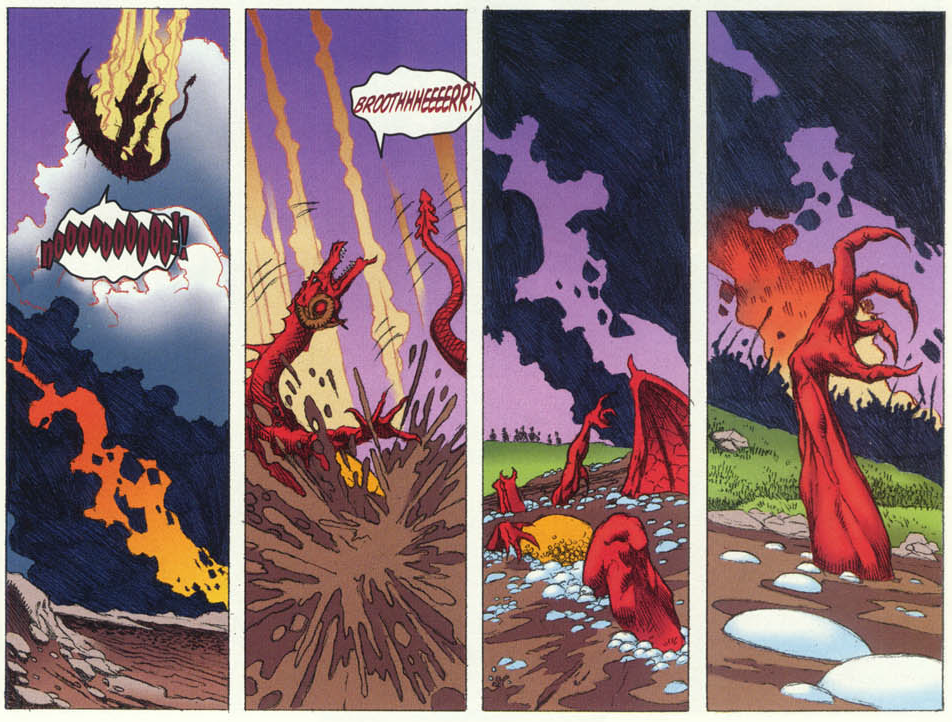 In the epilogue Ad’amra tries convince Chromium that a thing between them might work, but he is… less than receptive…

REVIEW
To be honest, this is one of the lesser Armada comics. It’s main drawback is the characters. Red Donald gets some nice character work in the second issue, where the previously boastful prick shows genuine sorrow and regret over releasing Palladia, but other than that all the characters are really bland. Ad'amra and the town wizard have no personality at all, Ham/Rhuell is to mysterious for his own good and Palladia is just evil for evil’s sake. The plot isn't much to write home about either. Issue one is taken up mostly with talks about the history of the town, issue two is just one big fight scene.

Then there is the romantic sub-plot. Let me give you an impression of how that develops. 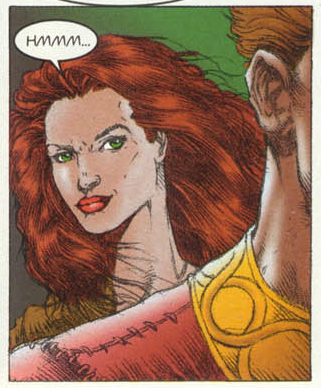 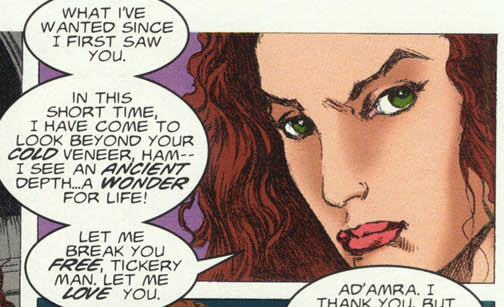 No, you didn't miss any scenes. She meets him, the guy does nothing but look broodingly out of windows for a few pages, and suddenly she has "seen an ancient depth" in him. Even more bizarrely, in later scenes Ham/Rhuell seems to reciprocate the feelings, even though he hasn't shown the slightest bit of interest in Ad’Amra. In a short story I can buy a "love at first sight" plot, but at least show some chemistry between the characters! Or any conversation at all! In previous reviews I said that I did like hints of characters being deeper than the comic had space to show, but if you’re going to do a love story, you can’t just hint at it, you have to actually show it.

On a positive note: the art is very detailed and pretty awesome. The coloring is especially great compared to a lot of the other Armada comics. In fact, the editorial in the back makes special mention of the inking done by the company Digital Chameleon, who used a special technique to print pages directly from the pencils. Wikipedia tells me they were also the first company in comic book industry to make widespread use of PhotoShop. I know absolutely nothing about printing, but I do know that this comic is very good looking! 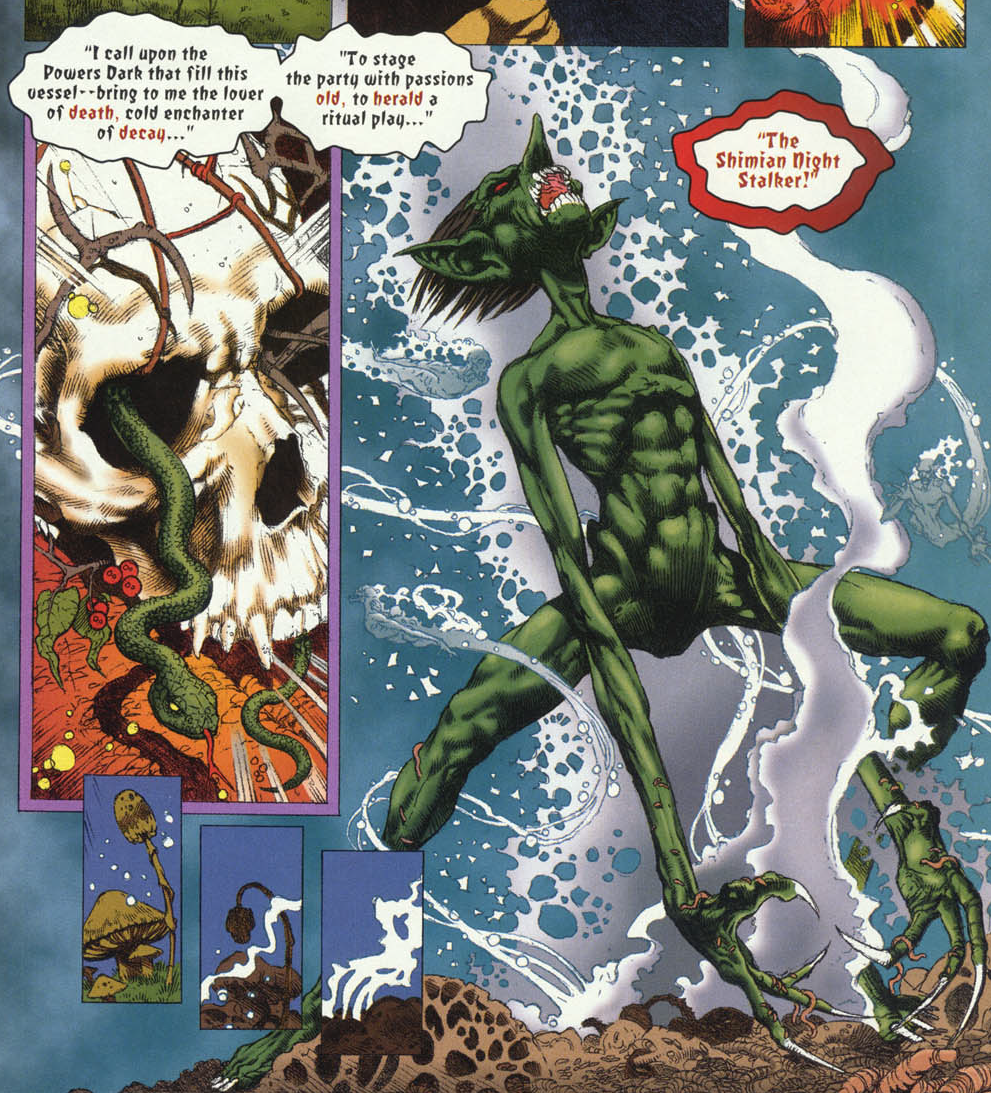 I’m not entirely sold on the designs of some of the dragons, like Palladia's beer belly or Vaevictis' sideburns... 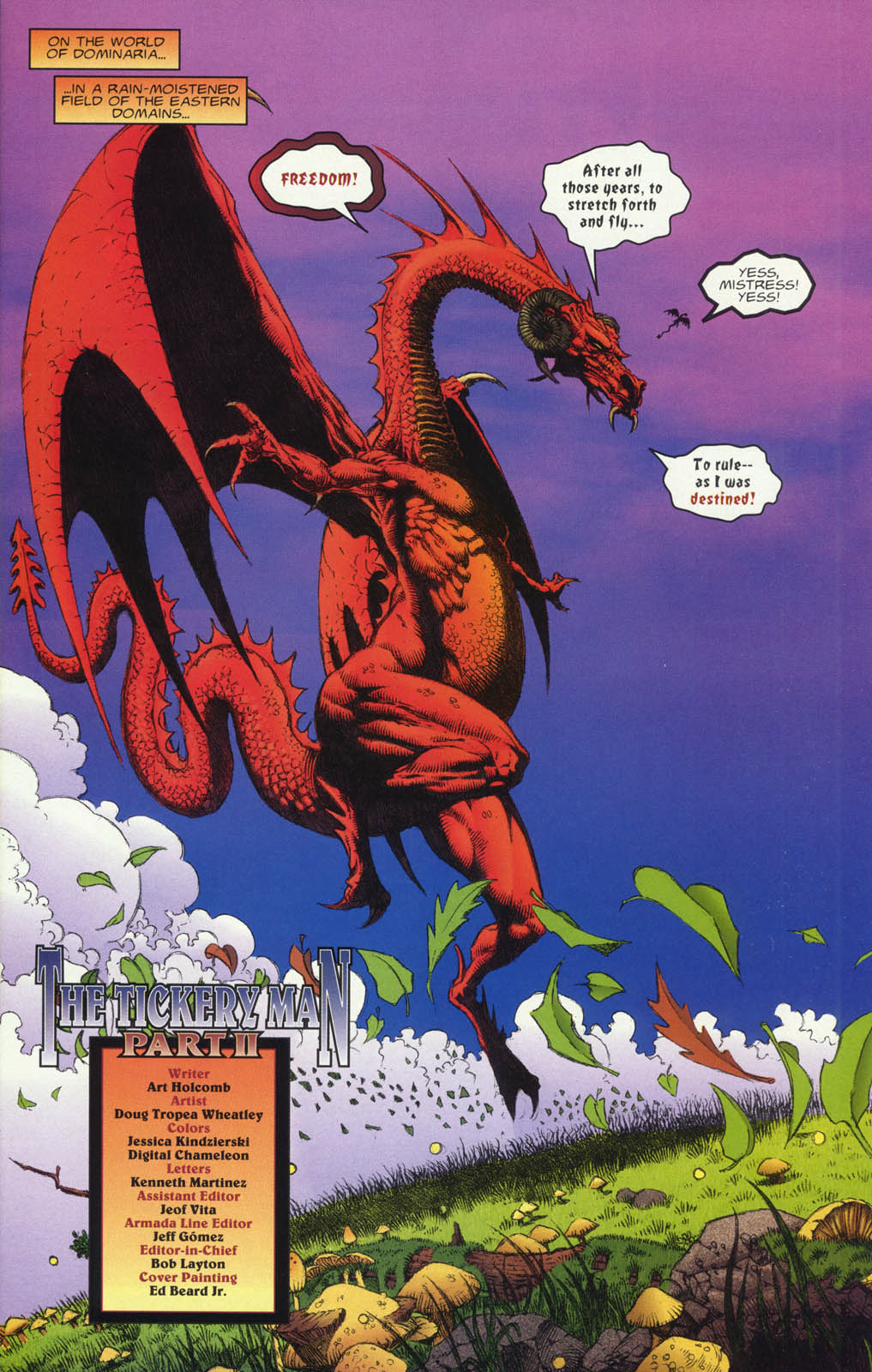 …but I guess those are consistent with their looks on the cards, so I can't complain too much.

What I can complain about is this silly scene.

TRIVIA
As you probably noticed, this comic tells us nothing about where the Elder Dragons come from. The Elder Dragon War is never even mentioned. The editorial only says they have mysterious origins "scrawled within the most ancient tomes", so that's not very helpful. This is the origin of most of the other facts we know about the Elders though. For example, this is where it is stated that Palladia and Chromium are siblings and that Vaevictis is their cousin. Also, Chromium at one point states that the Elders "hail from the dawn of time", which will later become a boast from Nicol Bolas, as well as how Sorin describes Ugin. For more information on the Elders you can check out this article I wrote a while back.

Vaevictis Asmadi was turned into a dragon whelp by someone called Faralyn. We don’t get explained who that is, or why he did it, but remember the name. We’ll meet him when we get to Ice Age.

In the editorial it is said that writer Art Holcomb drew upon his Chinese heritage to incorporate "the Asian myth of the Tickery Man" in the story. I haven't been able to find anything about a tickery man in Chinese fables or mythology, so I can't really comment on this, but it is a cool little behind-the-scenes detail to know.

...and that's about it. Usually I can come up with more stuff, but this story is just very light on interesting material.

CONTINUITY & TIMELINE
We don't get much to place this story on the timeline, just this little tidbit:

There are however a few hints that allow us to give a slightly more detailed placement. For example, Palladia calls Chromium a "traitor to the five" for siding with the humans. At the end Chromium tells Ad'Amra that he will never love again, clearly still hurt about something. Jeff Gomez has told me these little comments were intended as clues: in Dakkon Blackblade Chromium still had his mate Piru, who was referred to as the sixth Elder and was killed by Dakkon. So Elder Dragons has to take place after that comic. Since Palladia spends 80 years underground, we can also safely state that it has to happen after The Dragon War, which happened in the years directly following Dakkon.

Unfortunately we can't say when it happens in relation to Arabian Nights. The chronology of the comics given in Urza-Mishra War #2 places Elder Dragons at the very beginning of the list, before Dakkon Blackblade and Fallen Angel, but mister Gomez has said this was a mistake. The Story of the Battlemage Ravidel doesn't mention the events of Elder Dragons, so that source isn't any help either. Which is perhaps a good thing, since up until now it has mainly caused confusion for us. So we'll have to make due with placing Elder Dragons somewhere between The Dragon War and the Brothers' War.

Speaking of which... I hope you will all join me next time for the original telling of the Brothers' War, when I review Antiquities War issues one through four and Urza-Mishra War one and two!
Posted by Squirle at 21:40