Where to begin my project? Well, how about at the very beginning of the game? Today I'll discuss four short writings that came out before Uncharted Realm started, before Wizards of the Coast published its first novel, before even the Acclaim comics or the Harper Prism novels. Most of them were written by Richard Garfield himself, and one of them hails directly from the original Alpha rulebook! Welcome to the first instalment of Multiverse in Review, where we look at the very rock the Magic storyline is build upon. 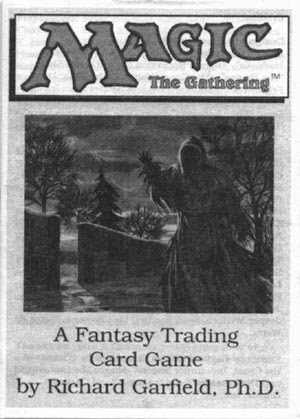 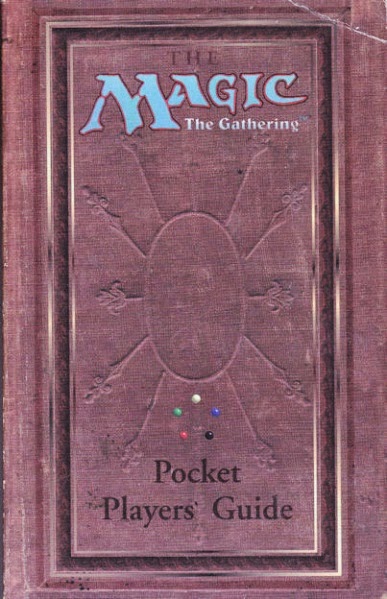 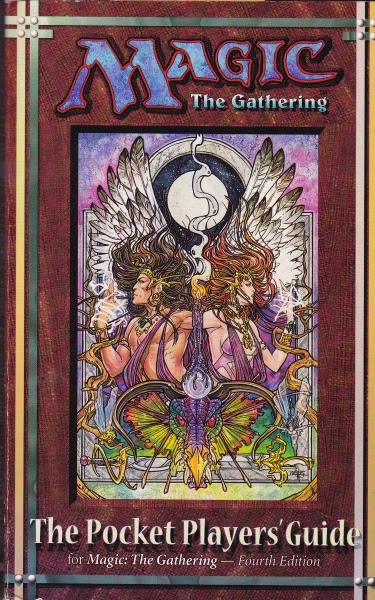 Okay, the 4th Edition players' guide came out after some of the earliest novels and comics, but its discussion fits best with the other three articles, so I'll discuss it here.

SUMMARY
Introduction is an incredibly short story, really just a snippet, about the planeswalker Worzil who senses she's under attack by her rival Thomil and prepares for battle. Roreca's Tale is an extension of Introduction, written from the point of view of Roreca, a... eh... furry, tailed, mana finding... thing. Every other creature, artifact and spell in the story is a reference to something in the Alpha edition of Magic, but I can't for the life of me figure out what she's supposed to be. This story goes further than Introduction and also shows the end of the battle. I won't spoil to much, but it is accompanied by this lovely picture of a Lord of the Pit.

Dominia and its Walkers and Nature of Dominia are just descriptions of the multiverse, planeswalkers, etc. But since all these stories and articles are fairly short, you really should just go read them.

REVIEW
Eh... what is there to review? Introduction is just two paragraphs. And the articles are pretty much unreviewable. They are just info dumps of information that isn't entirely accurate anymore. If you want a good introduction to the multiverse, planes, planeswalkers etc., check the article that reprinted both Dominia and its Walkers and the Nature of Dominia. It also gives a good overview of how things stand in the current continuity, and explains the big changes made in Future Sight.

Roreca's Tale is a fun enough description of a duel between planeswalkers. It's fine if you've never read another Magic story. Which is good, considering it was the only Magic story in existence at the time. But if you've read Arena, which is chock full of Magical duels, this is nothing special. Just another battle. Bit annoying that we never find out what Roreca is exactly though.

All in all nothing essential if you have a passing interest in the Magic storyline, but essential reading for any hardcore fan. This is where it all started!

(I promise more thoughtful and extensive reviews in the coming weeks, when we have actual novels to work with!)

CONTINUITY
These articles were written long before a coherent Magic storyline crystallized, so there are a bunch of things that don't entirely fit in continuity, especially in the articles. But its surprising how much things still hold up. While none of the stories mention anything like the Spark, or the Blind Eternities (those concepts wouldn't appear until... from the top of my head I'd say the Weatherlight Saga), but on the other hand Worzil and Thomil don't do anything that doesn't fit with later depictions of planeswalkers. They are portrayed as aloof, strange and even to Roreca Worzil seems distant and incomprehensible. There is no hint of the godlike power of old school planeswalkers yet, but nothing that directly contradicts it either.

The articles do have some things that don't fit, but it's interesting to see that those concepts aren't fully discard later either. Rather, they tend to evolve into more recognisable features of the canon. For example, it is mentioned here already that planeswalkers are difficult to kill. The reason here is that they can always just jump to another plane when things go sour. In the first novel, Arena, this will change into planeswalker being essentially immortal in and of themselves, not just because they can always conveniently escape. Another example: according to Nature of Dominia, regular wizards don't know anything about the five colors of Magic (presumably they use it, but don't know the mechanics behind it), and thus can't hold a candle against planeswalkers. Again, the earliest novels already have mortal wizards know about the five colors, and eventually it will be established that planeswalkers are just preposterously powerful compared to wizards. Not because they know the difference between the colors of magic, but just in and of themselves. (Note that Dominia and its Walkers rather muddles the subject by using "wizards" as a synonym for "planeswalkers")

In the end I see no problem with keeping Introduction/Roreca's Tale in continuity, but the articles are just of interest for what was based on them. Simply to much has changed from their depiction of planeswalkers.

TIMELINE
As part of this project I will try to make a definitive timeline of the Magic storyline. Back in my days as MTGSalvation storyline moderators I already made this one (obviously other people have since contributed to the wiki), based on an earlier one made by Eidentvl and Squeeman over at Phyrexia.com. But that timeline is incomplete, has some mistakes and, most damningly in my eyes, has no annotations or justification for most of the dates. By rereading all the stories and covering their placement on the timeline in my reviews I hope to create a complete and completely correct version of the timeline once and for all.
So then the question is: when do Introduction and Roreca's Tale take place? Well... that's a tricky one, since there is nothing in the stories themselves that indicates a specific time period. But there may be some hope, for the there is something else of interest in the Fourth Edition Players' Guide: a timeline! As far as I know the very first one in the canon. Unfortunately it has never been reposted online, as far as I know. Fortunately, I own the Players Guide, so I can scan it for you! Unfortunately, my copy is in Dutch, so I'll need a few days to translate it into something a bit more legible.

Check back Wednesday for the scans of the timeline, the translation and a more general discussion of the Magic timeline!
Posted by Squirle at 22:20