As promised, here is the timeline from the Pocket Players' Guide. A day earlier than expected since I happened to stumble upon a complete write up while doing some more google research for my project. So with the help of one Tom de Ruyter and his website from the early days of the internet, I present to you: the oldest timeline in the Magic canon! 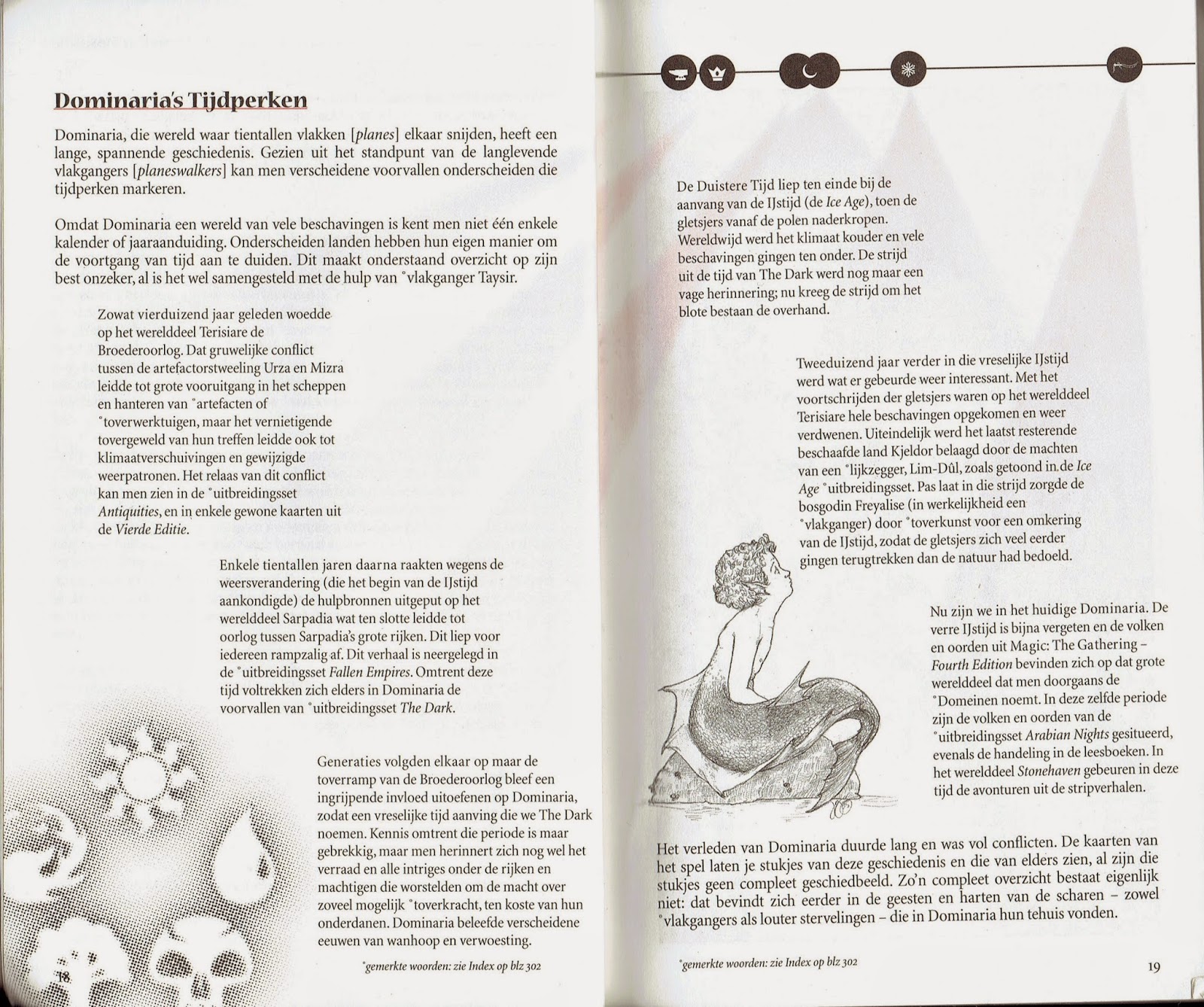 As always, click to enlarge the scan. Behind the jump break you'll find the original English text.

Dominaria, the world at which dozens of planes intersect, has a long and exciting history. From the long-lived perspective of planeswalkers, however, there are several major defining events that stand out.


About four thousand years ago, the Brothers' War occured on the continent of Terisiare. This terrible conflict between the artificer twins Urza and Mishra resulted in great advances in the creation and usage of magical artifacts, but the massive magical devastation of their conflict resulted in climactic shifts and changes in weather patterns. The tale of this conflict is seen in the Antiquities expansion, and in some cards in Fourth Edition.

A few decades later on the southern continent of Sarpadia, the changes in weather (which herald the onset of the Ice Age) make resources scarce, and eventually the empires of Sarpadia go to war. The outcome is disaster for just about everyone. This tale is told in the Fallen Empires expansion. Also, the events of The Dark expansion occur elsewhere in Dominaria.

As the decades pass by, the magical disaster of the Brothers' War continues to have a massive effect on Dominaria and a terrible time known as The Dark begins. Knowledge of this period is sketchy at best, but it is remembered as a time of treachery and intrigue when the rich and powerful grappled to seize control of as much magic as possible at the cost of the peoples they ruled. Massive destruction and despair enshrouded Dominaria for several hundred years.

The Dark time comes to a close as the Ice Age begins, and glaciers begin creeping outwards from the poles. Weather gets colder worldwide, and many civilizations fall. The struggles of The Dark are a distant memory; now the struggle for simple survival is supreme.

Two thousand years into this terrible Ice Age, things get interesting. On the continent of Terisiare, civilizations have risen and fallen as the glaciers have advanced. Now, the lone civilized land of Kjeldor is menaced by the forces of a necromancer, Lim-Dûl, as seen in the Ice Age expansion. Late in the fighting, the forest goddess Freyalise (actually a planeswalker) magically reverses the course of the Ice Age and the glaciers begin to recede far ahead of the natural schedule.

It is now the present day on Dominaria. The Ice Age is a distant memory, and the peoples and places of Magic Fourth Edition are present on a large continent known commonly as the Domains. The people and places of the Arabian Nights expansion is also present in this time period, as is the action of the novels. On the continent of Stonehaven, the action of the comic books is transpiring, too.

Because Dominaria is a world with many cultures, there is no single calendar or way of telling the year. Different lands have their own ways of marking the passage of time. As a result, the timeline below is uncertain at best, but has been assembled with the aid of the planeswalker Taysir.

Dominaria's history is long and full of conflict. In the cards of the game, you will see bits and pieces of the history of this world (among others). They are not a complete history. Such a history does not, in fact, exist: it resides instead in the minds and hearts of the multitudes--planeswalkers and mere mortals alike--who have called Dominaria home.

It's quite nice to have this timeline. It should give those people following my project who are not well versed in the old storyline some idea of when things happen in relation to one another. Since I don't (yet) have the issues of Duelist Magazine that cover the history of the early sets my project will first get into the Harper Prism novels and it won't be until the very last of those that we get some stories that tie in to expansion stories. But at least there is this timeline to tell you that the novels we'll cover first actually happen some time after the Ice Age, and to fill in the history of Dominaria a little.

Despite being such an early source, this timeline really holds up well. The dates pretty much correspond to those in the official timeline released around the time of the Weatherlight Saga. This one mentions the Ice Age lasting 2000 years and the later one have it last about 2500 years, but you can blame that on rounding off.

The most interesting thing about this timeline is that it allows us to (vaguely) date the Harper Prism novels. Since the Brother's War raged "almost four thousand years ago", and the novels and comics happen on "current Dominaria", the present is established at about 4000 AR (Argivian Reckning, a dating system that starts with the birth of Urza), give or take a century. This actually matches up pretty well with the first four Harper Prism novels which, as you'll see in the coming weeks, we can actually date to the precise year. I assume Introduction and Roreca's Tale also take place around the same time. That is a bit speculative, but it seems clear from this timeline, the Skaff Elias article and latter sources like the Acclaim Battlemage site that in these days "present day" meant about 4000 years after the Brother's War. Since the base sets are supposed to be present day-based and Introduction and Roreca's Tale are representations of the base set I don't think it's much of a stretch to place them on the timeline around 4000-4100 AR.

There is one problem with this timeline though: the placing of Arabian Nights. As we will see eventually, when we get to the Arabian Nights comic, the events of that set have to take place before the Ice Age. When exactly it does happen is a controversial issue: there are some conflicting sources about that, but we'll get to that when we discuss those sources. For now let's just say that Arabian Nights is a bit of a problem child in the canon as a result of originally being a real world source that was later adapted into a proper part of the storyline. You'll notice that the later timeline I mentioned above actually ignored Arabian Nights.

TRIVIA
According to the text the timeline is made by Taysir, a planeswalker from the Acclaim comics who we will see being used as the supposed writer for texts a few more times. Cool to see him already used in that capacity here.

Oh, and ignore the merboy. The entire Players Guide is filled with random pieces of fantasy artwork, the vast majority if which don not reference any card or story. They're just some drawings the editors must've liked.