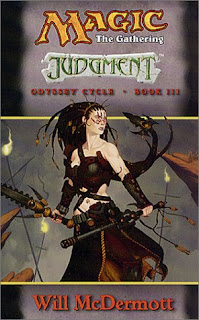 SUMMARY
We open on Kamahl burning Chainer's body at the end of Torment. In this version things play out slightly different though. Most significantly our hero initially tosses the Mirari away, but when he digs his sword out of the rubble the orb has mysteriously merged with the pommel. He wont leave his sword, a family heirloom, so takes the Mirari anyway. After fighting the people who challenge him over the sword in Cabal City he decides to go back to his home, Auror village in the Pardic mountains.

Meanwhile Laquatus is fuming over his recent loss in the civil war when Rillu Veza sends him a map of the trench he is now trapped in, just to torment him. This turns out to be a bad move as it leads Laquatus to some underground caves that allow him to escape. He starts manipulating the Order and the Cabal, planning to use them to gain the Mirari. Llawan sends Veza to the Cabal as well.

At Auror village Kamahl talks to his sister Jeska and his mentor Balthor about the Mirari, but while doing so he succumbs to its charms. He decides that he should unite the barbarians against the Cabal,the Order and Laquatus, all of whom are now converging upon the mountains. To accomplish this he sets up a tournament in which everyone can challenge for the title of leader. Kamahl wins every match of the tournament, but in the proces almost loses himself to Mirari-induced blood lust several times. Near the end Jeska decides she has to take the Mirari-sword away from her brother to prevent disaster. She talks this over with Balthor but then knocks him out to prevent him from trying to do the stealing himself. Unfortunately this is seen by a scout, who tells Kamahl Jeska killed Balthor. He flies into a rage and stabs his sister through the belly. The only reason she survives is because he wishes for her to burn in the fires of Fiers's afterlife, a wish the Mirari makes come true by keeping her alive while fire slowly burns her up from the inside. Moments later a recovered Balthor shows up, which shocks Kamahl out of his rage. He throws away the sword and breaks down crying. 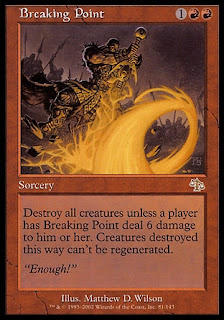 The next morning Kamahl and Balthor decide to bring Jeska to the Krosan Forest, hoping Kamahls friend Seton can cure her. Kamahl wants to leave the Mirari-sword in Auror but Balthor secretly brings it, thinking Krosa will be the ideal place to lose it forever. During their journey Kamahl begins to express a desire to stop fighting, and develops new magical abilities, like the summoning of animals.

The Order and the Cabal forces who were converging on Pardia end up fighting each other, so Kamahl and Balthor can pass them easily, but they are spotted by Laquatus who goes after them. Balthor fights and kills Laquatus' champion Burke to give Kamahl a chance reach Krosa, but dies in the process.

Laquatus manages to forge an uneasy alliance between the Cabal and the Order so the two forces march into Krosa together. While this is happening Llawan's forces invade the Otaria Trench, destroy Laquatus's troops there and send an army after the forces that he requested come to Krosa via the underground tunnels. On land he has equally bad luck. Nantuko start harrying the expedition and the Order and the Cabal start showing signs of scheming of their own. Oh, and a zombified Balthor is also stalking this whole mess. Laquatus does some counter-scheming to keep the alliance together, up to and including assassinating the acting leader of the Order forces and stealing the crystal sword of leadership from him. 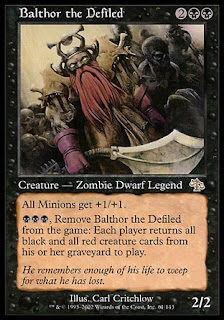 While Laquatus is in the underground caves inspecting his troops, zombie-Balthor manages to get into his tent. He kills the nantuko the ambassador mind controlled as his personal bodyguard, but then has to run from the Order forces that are attracted by the noise. In the chaos that follows the crystal sword is revealed, cluing the troops in to what is going on. Then Braids, Commander Eesha, Traybor (the leader of the Cabal forces) and Veza teleport in, revealing that Llawan managed to broker a peace between the Cabal, the Order and the Mer Empire. Laquatus is left stranded in the middle of the forest.

Kamahl meanwhile makes it to Seton, who shows a much more spiritual, reverent side of himself. He takes Jeska in for healing. He gives Kamahl vague warnings about how there is a storm coming, then sends him onward to talk with Thriss, "the spirit of the forest". Thriss turns out to be a giant nantuko, who gives some vague comments about the Mirari "seeking knowledge" and claims that it can be used for good. He pushes Kamahl to become its champion. The barbarian initially refuses but does agree to start learning meditation techniques from Thriss.

Laquatus makes it to the heart of Krosa and Kamahl goes to face him with the Mirari-sword, despite Thriss asking him not to. Kamahl is nearly overwhelmed when Laquatus' troops teleport in, but a timely intervention from Balthor saves him. Kamahl pins Laquatus down and Balthor reveals it was Braids who resurrected him. Laquatus then realizes Burke's dementia flesh has been infecting the zombie, gains control of him and has him attack Kamahl, which allows the merman to escape. Thriss tells Kamahl to use the Mirari-sword and he does so, killing Balthor. Kamahl then finally faces Laquatus alone, kills him, and leaves him pinned to the ground, impaled by the Mirari-sword. From the sword a wave of new plant life emerges. 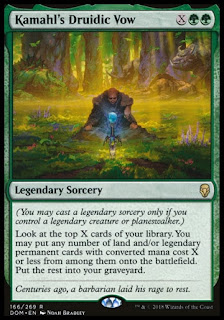 REVIEW
Judgment is an okay book. Not great, not horrible, just okay. I guess its main virtue is finishing up the Mirari's tour across the five colors in a way that actually feels natural, without losing sight of characterization. It's not as character focused as Chainer's Torment, but it never feels as mechanical as Odyssey's trek across the continent either. It's hard to say much more about the plot, as it really is just about Kamahl going home, succumbing to the Mirari, then moving to Krosa to kill the main bad buy and then finally getting some peace (although we'll see in Onslaught that this peace is very short-lived). So let's instead focus the more interesting part of the book: the characters.

Laquatus really is a horror version of a telepath. He beats up people to vent his own frustration, then wipes their memory of the event so they still think he is their friend. It is quite unsettling, but well told. He should meet up with Ashiok. I'm sure they'd like each other. It is good to see his scheming to keep the Cabal and the Order in action (him taking over the Mer Empire in Odyssey and the Otaria Trench in Torment mostly happened of screen), and it is quite fun to see him out-played by Llawan and Veza in the end. Though I do think it is odd that in the end Laquatus accomplishes nothing in the entire trilogy. He fails to get the Mirari three times in book one, loses his civil war in book two, and gets outplayed and then beaten up and killed here. At least he will get to succeed in something in the anthology The Secrets of Magic, which we'll cover soon.

Actually, at one point I was wondering if Laquatus's failure as a bad guy was an intentional mirror to Kamahl. Because killing the merman is really the first thing the barbarian actually succeeds in. This became especially noticeable during the competition to unite Pardia when we are introduced to Kamahl's old friend Talon. Talon is also a big burly barbarian, except he remains an honorable good guy throughout and refuses the Mirari-sword. If only he had been the main character of this saga, Otaria would probably have been saved a lot of ruin! 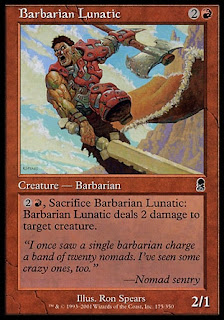 Another character I really like is Balthor. I love that he is a bit of a subversion of the wise old mentor figure. Jeska is the voice of reason who continually goes against Kamahls stupid scheme to set up a tournament. Balthor actually seems to think it is quite exciting at first. When Kamahl starts showing signs of being battle-mad he does try to keep his student calm, but he goes along with the idea for far too long and only realizes Jeska is right when Kamahl has already gone way too far, chopping of one off Talon's arms and bringing Pardia to the brink of civil war.

Braids also continues to be great. She leads the Cabal forces that go after Kamahl before giving command to Traybor and for a time rolls with a death squad made up of snake monsters that were left over from Chainer's coup that have since joined the side of The First. She gives silly nicknames to one of them, and the others decide they like having names so much they think some up for themselves. When they tell Braids that they like her because she is the only one who talks to them, she actually blushes! 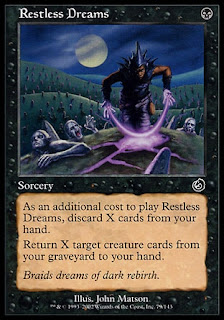 Finally, I even find myself liking little things like Kamahl's habit of going for a run every morning. It's very small, but just giving the guy a hobby that he's excited for when he wakes up in the morning makes him more relatable.

None of these remarks about the characters really build to any kind of conclusion, just as they don't really build to anything in the novel either. They are just sort of there. A bunch of small moments of greatness to polish up and otherwise merely serviceable story. 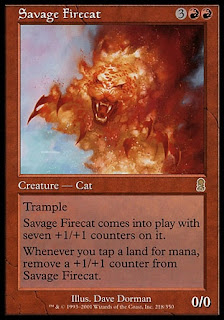 "In the middle of the room he found Thriss, the guardian spirit of the forest, and for the briefest moment, Kamahl was terrified. Thriss was a huge mantis, easily fifteen feet tall, complete with the razor-sharp ridges on his arms and legs, each of which was longer than the blade on Kamahl's two-handed sword 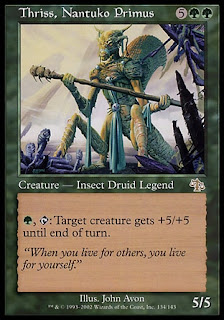 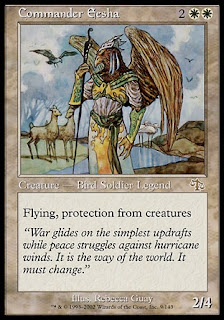 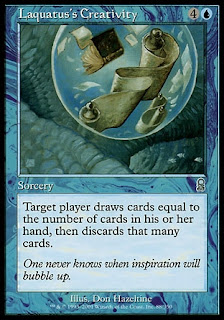 "I have been observing the orb since Chainer discovered it ... It is of this world but comes from beyond this world. It seeks knowledge not power, for it has no need of power. It is alive but has no thought, no purpose beyond the search for knowledge"


TIMELINE
Nothing new to report here. It continues directly from Chainer's Torment, so I'm following the official timeline and putting it at 4305.
Posted by Squirle at 00:18