Welcome to the next installment of Dominarian Annotations! This time we'll take a look at episode 5 and episode 6.

It feels a bit like the number of things I have to explain is decreasing now that all the main characters have been introduced and the plot has started in earnest. I do want to stick to this schedule, so if this trend continues I'll probably include looks at other lore stuff released for Dominaria, like the article on making the map of Dominaria or the podcasts. For now though we've just got two new chapters to go through.


"Venser gave up his spark to Karn, to rescue him. Venser did not survive."

At the end of the Scars of Mirrodin story, Venser finds Karn, but the golem's heart has been corrupted by Phyrexian oil. Venser himself is infected at this point, so he decides to teleport his heart into Karn's to cleanse him from the Phyrexian influence. This also somehow restored Karn's ability to planeswalk. That caused a lot of debate in the Vorthos community, as planswalker sparks are not supposed to be so easily transferable. According to the novel Agents of Artifice they are part of a planeswalker's soul, and in the original Mirrodin story Memnarch tries a spark-transplant which requires turning all of Mirrodin in a giant transplantation machine. So, did the Mending change how sparks work? Is Venser just that good a teleporter? Did the heart-transplant trigger a second spark inside Karn?

This isn't the place to get to the bottom of that debate. Ajani's explanation is nice and vague. Let's keep it that way.


"To Tolaria West it is"

I've already talked about Tolaria in my first annotations, but since then it has been revealed that there are now 5 new Tolaria's, not just West. West is in the Spice Islands, with other locations in Orvada (an empire first mentioned in Ashes of the Sun), at Lat-Nam, which was the location of one of the most ancient schools of magic during the Antiquities War and underwater near the ruins of the original Academy. There is also the Shadow Academy which doesn't have a location. It's still unclear what that means exactly. 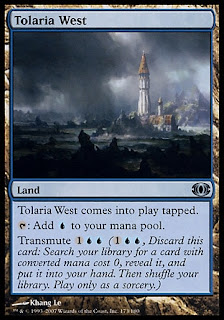 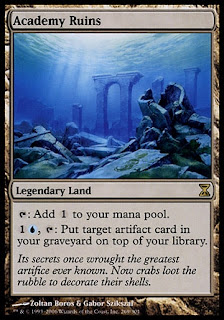 "Jhoira sounded somewhere between regretful and impatient. "Just an ex-lover I wasn't expecting to see today.""

So we learn things didn't work out between Jhoira and Jodah. No idea how their break-up went, but I'm not seeing Phyrexian infested time rifts anywhere, so it looks like things worked out better than with her other ex, Kerrick. (See the Time Streams review if you want to know what I'm talking about.)


"It's dementia magic all around, I'm afraid."

Between the killed Tolarian seeing serpents, Liliana seeing Josu and Gideon seeing undead versions of Drasus and Olexo, it seems like dementia magic's current incarnation preys on the fears of its targets. Back in the day it was very different: dementia caster went into their own heads to summon nightmare creatures, many losing themselves to insanity in the process. I'm not sure how I feel about this change. I like that we see the world moving on, rather than just repeats of what came before, and from an in-universe perspective it makes sense to develop your magic so it turns your enemies insane rather than yourself, but this does feel a lot more like a standard fantasy trope, rather than the very unique dementia casting of the past. 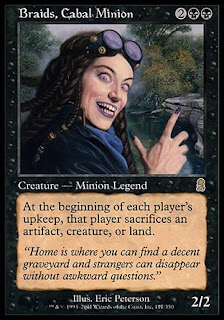 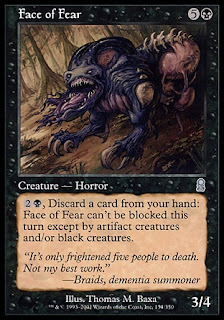 "All those titles he's given himself! 'Eternal Patriarch of the Cabal,' 'King of Urborg,' 'Lord of the Wastes,' 'Master of the Ebon Hand'"

The Cabal Patriarch was the immortal founder of the original Cabal, although in the novels he wasn't called that. People referred to him simply as The First.

King of Urborg is a new title, although Teferi once referred to Lord Windgrace as the Panther King of Urborg. We also know Gwendlyn di Corci once ruled the place, and that Nevinyrral ruled the city of Urborg after which the rest of the island was named (the city is now gone, after Nevin activated his Disk.)

Lord of the Wastes was, as mentioned in the first annotations article, a Dominarian term for Yawgmoth.

I think Master of the Ebon Hand is also a new term, though we did see a Master Breeder as a member of the Ebon Hand before. I could be mistaken though. Considering how deep Dominaria goes there could very well be some source that refers to a Master of the Ebon Hand I'm forgetting at the moment. Anyway... the Order of the Ebon Hand was a very creepy cult founded by Tourach that worshiped the Ebon Praetor. They created the Thrulls as slaves, but were eventually destroyed when their creations rose up in rebellion. What I find interesting is that according to the flavor text of Cabal Evangel, Belzenlok is using this title but also that of Doom of Fools, which was the nickname of Tevesh Szat. Szat was instrumental in the destruction of the empires from Fallen Empires (as shown in the comic of that name), with the Ebon Hand being among the first Fools to be Doomed. I wonder what the gospel of Belzenlok actually says to square him being on both sides of that conflict. 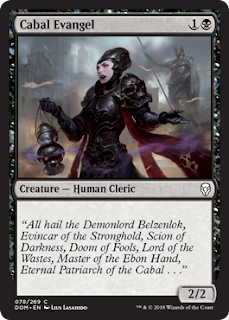 "Is there anything here that's particularly ancient or famous? Or both?" Jodah frowned in thought. "I think I have it. Come with me." ... Jodah strode to one of the shelves and lifted down a box. He cursed under his breath and showed the empty container to Jhoira. "It's gone."

So, what could this stolen artifact have been? Later they are talking about the Blackblade, but I got the impression from episode 1 that that artifact came from New Argive, rather than one of the Tolaria's. There are loads of other possibilities though. The Stone Brain from Whispering Woods, the Magewall Hub from The Prodigal Sorcerer, the Amulet of Ti-Fu from Dakkon Blackblade (to accompany the sword), the Grey Chime from the unpublished Planeswalkers War comic, Rashida's Banesword, another version Jodah's mirror, the hourglass pendant Gerrard left with Pol Cordel in Maelstrom... any of these would be amazing to see resurface.


"With you and your friend Sisay, we could find every Cabal cultist in the Spice Isles."

The Spice Isles show up on the new Dominaria map as a few islands west of Aerona, but those are only one part of an island chain that wraps around the map, crossing an otherwise mostly empty ocean all the way to Terisiare. The Sheoltun Empire, which we talked about in previous annotations, spread out across these islands to conquer parts of eastern Terisiare. 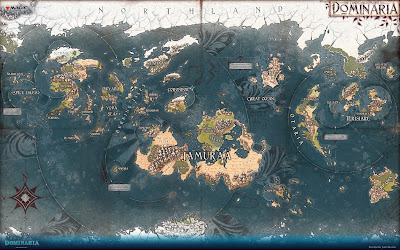 "His expression wry, Jodah jerked his chin toward Liliana and Gideon. "To help these Planeswalkers. Are you sure that they aren't taking advantage of you?""

Jodah's distrust of planeswalker has a long history. At the end of The Eternal Ice he chewed out Freyalise for her selfishness thus:


"You are so powerful you cannot help but cause harm. It's like sleeping with a mammoth. It might be a nice mammoth, but it's still a mammoth, and when it turns over in its sleep, you had best be prepared to move out of its way fast. Only when you understand that, understand how truly dangerous you are, will you be worth the divinity you claim."

Of course, current day Planeswalkers are much less powerful than the ones he faced in the Ice Age, so I think he's being a bit unfair here. Certainly the mammoth metaphor no longer fits?


"Then she added to Gideon, "I will not shut up. And stop elbowing me, it's like being bumped by a mammoth."

Again, this is all from the Dakkon Blackblade comic. Note though that Piru was a female dragon. Gideon is just assuming things when he calls her "him". I guess she really has been obliterated from history.


"Slogging through the Tivan desert"

The Tivan desert is also new as far as I know, though again, it could be that it was a stray reference hidden somewhere in a novel. I'm pretty good with my history, but I have to admit I don't know every placename given in throwaway lines, or the specific titles people were given. And with a decade of sources which references can come from, looking things up isn't an easy task either. So I'll just say Tivan is new, and if I'm wrong I'm sure Ethan Fleischer or Kelly Digges will correct me on Twitter ;)

Anyway... I AM sure the reveal of its location is new, as up till now the middle bit of the Jamuraan supercontinent was a mystery to us. I'm actually a bit sad it turned out to just be one ginormous desert. I was hoping there was still a large chunk of Dominaria left to discover there.

I would argue that in The Brothers' War Tawnos was a genuine friend to Urza. That was before he ascended, when his social problems seemed to be just a normal form of autism. Then he ascended though, getting the typical planswalkerial delusions of grandeur, as well as being driven mad by first guilt and then Yawgmoth. After that, yeah, it's hard to describe even his closest relationships, like with Xantcha or Barrin, as true friendships. 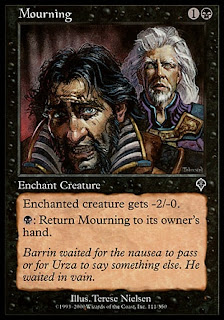 "Yes. It left me unable to return Zhalfir."

Teferi is, perhaps understandably, putting all the blame on himself here, but the main reason Zhalfir is still gone is because Jeska (who became a planeswalker at the end of Scourge) impulsively closed the time rift where the country once stood, locking it out of the time stream forever.


"She had made this stone herself in the Thran Mana Rig"

There are a bunch of Thran megastructures in the art of Dominaria, but the Mana Rig is the only such building we have seen before. It stood in Shiv and produced the Thran metal we talked about in previous articles. When Urza found it the local viashino and goblins considered it sacred ground, but he was able to broker an agreement with the various Shivan factions. Not only did they help operate the rig while Jhoira, Teferi and Karn worked on Urza's creations there, they supplied people for the Weatherlight's original crew during the rescue mission to Serra's Realm. This is why you'll find names like Diago Deerv and Machinist Terd in the list of former crewmembers on the MTGSally Wiki. 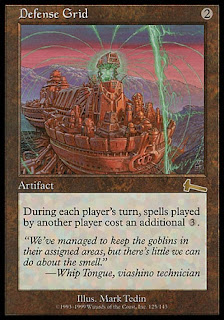 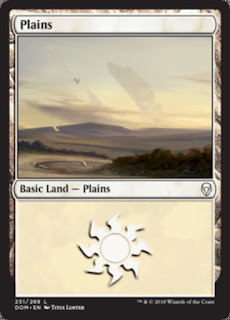 That's everything for now. So in two weeks time there will be more annotations, perhaps with a look at some of the non-story sources released for Dominaria as well. And don't forget to check back in one week when Multiverse in Review takes the first step of its own Mirari Conjecture with the review of Odyssey!
Posted by Squirle at 00:44