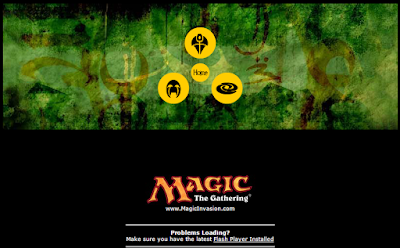 In the final issues of The Duelist we were told that Wizards was moving its magazine fully online. The medium then got a little reprieve in the form of TopDeck, but the move really was inevitable, and with Invasion block we've finally reached the point where there is no longer an official Magic magazine in print. Third party publications like Scrye and Inquest held out a few more years, and over in France Lotus Noir is somehow still going, but for official Wizards of the Coast content we have to go online from this point on.

For us storyline folk this exciting new digital era actually had very little to offer. Magicthegathering.com was at the time little more than a list of product releases. In addition to that there was SideBoard, which catered to tournament players, but if you wanted storyline stuff, or behind the scenes R&D info, you were out of luck. In 2002, around the release of Torment, their website adopted its now-famous daily articles format, with the occasional Arcana or feature article on the storyline. Not until the tail end of Kamigawa block did we get a regular article on flavor stuff.

But that is not to say there was nothing for us at all during that time. We already seen that product pages sometimes contained little stories, like with Nemesis and Prophecy. And for Invasion block Wizards created a whole sub-site! It's very early 2000's, complete with flash animations, looping background music and downloadable wallpapers. But there actually is some interesting Vorthos stuff hidden in here. For starters the Kev Walkers comics we have been look at for Masques, Nemesis, Prophecy and Invasion continue here. More importantly, in addition to that this site also gives us the most complete maps of Dominaria we've ever been given! 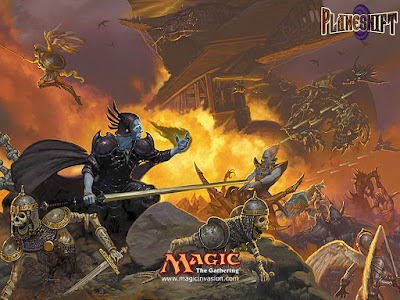 THE COMICS
Let's start with the comics. These are just a straight continuation of the Kev Walkers comics we've seen before. In fact, the Invasion one is just the exact same comic we've already covered, just animated. The Planeshift one shows the opening of that novel, with Urza transporting the troops to Urborg and Crovax eating Tsabo Tavoc. The only real difference from the earlier comics is that they managed to put in the alternate arts from the cards of Ertai, Tahngarth and the Weatherlight, which is a nice touch.

Unfortunately the Apocalypse comic has been eaten by internet entropy over the years. If memory serves it shows scenes from surprisingly late in the novel, after Gerrard has already decapitated Urza and rejoined the Weatherlight, showing Yawgmoth preparing to enter Dominaria. But it's been a looooooooooong while since I read it, so don't take my word here as gospel. I hope that somewhere in the Wizards office there is an old flashdrive (or a burned DVD, considering when this came out) containing the comic, as it would be a shame to lose such artifacts. The only thing we currently have left is the credits, which show that this comic wasn't done by Kev Walker but by Greg Staples, the only one in the bunch to have a different artist.

I've been calling these comics "animated", but that is really is stretching it a bit. It's not so much an animation as a souped up version of the guided view option you get on digital comics from Comixology or Marvel Unlimited. The story is shown panel-by-panel, the only movement being those panels occasionally sliding into view and a sound effect popping up here and there. So don't expect too much. I do think it works pretty well though. There are some good reaction shots that work better when you don't see the whole page at once, and it is kinda fun to have the panel of Urza rising from the water rise up from the bottom of the page itself. It's not anything amazing though. Good promotion, nothing more.

Two little things that sprung out to me in the stories themselves:

There is actually a second comic in the Planeshift section. When you click on "Map" it will not just show the Dominaria map to you, but first you are given a small introduction of Greven il-Vec reporting on the war to Crovax. This scene isn't in the novel but could very well have happened behind the scenes. It adds nothing to the story really, but for completion's sake I'll include it one the timeline. (Unlike the other comics, which I count as non-canon adaptations of the novels.)

Which brings me to...

THE MAPS
The maps on this site are really the pinnacle of Wizard´s cartography. At least, the pinnacle of stuff that has been made public. Up to this point most maps we've seen were of a single continent. The only bigger maps were very small and not labeled, like in the art of Invasion Plans or in the header of Pete Venter's Dominian Chronicles articles in The Duelist. After this we will only be given a few more maps of smaller regions before Wizards will stop making them altogether. 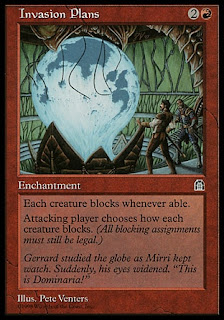 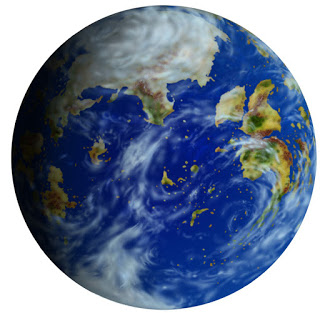 Here though we are given a map showing Aerona, Jamuraa and everything in their vicinity. Combined with the above globes fans have been able to cobble together an almost complete map of the entire northern hemisphere of Dominaria. (Note on the map I've linked to: I think Madara is at the wrong spot there, and would expect Caliman to be smaller. But we don't have any officially published sources to prove that.) 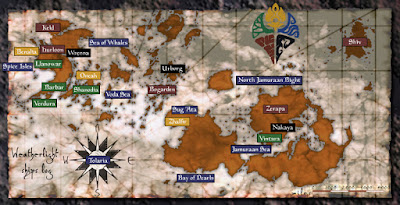 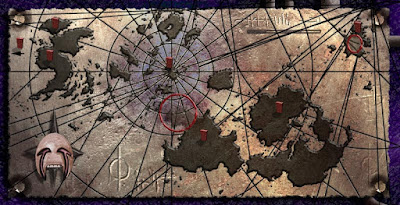 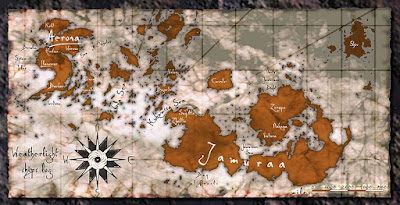 These are the three maps on the site. On the Invasion subside we have a clickable map that gives interesting tidbits of information on certain places, though it is mostly stuff we've already learned from the novels. I do think it is cool that they included obscure places like Wrenna and Barbar, but when you click them you don't get any relevant info. For example, Oneah gives you a little paragraph on the Samite order, but nothing about the destroyed civilization that was featured prominently in various pre-rev sources, which is a little disappointing. Though it is fun to use these odd bits of information to speculate on possible links. Are the Samite form Oneah originally? Did Kangee live in Suq'ata?

There is also the map with the colored names, which was part of a contest to win a booster box of Invasion and a limited edition Coalition banner, which sounds pretty awesome. I know I'd like to have that hanging on my wall. And I'm pretty sure I could easily have won if I had know the contest was one back then. All you have to do is match the places with the colors of Magic while making as few mistakes as possible. I guess places like the aforementioned Wrenna and Barbar might have given some people pause, though if you checked out that clickable map first you would've gotten some clear hints. The only one I got wrong was Suq'ata. Which is blue for the purpose of this contest, though it has blue, black and red cards in the game. I guess red on account of Telim'Tor ruling there.

Finally there is the Planeshift map, which shows the world's situation halfway through the cycle. Again, most of it we've already seen the in Invasion cycle books, but there is some additional stuff. There is a reference to the Phyrexians committing genocide in the regions shown in Prophecy, and one unexplained reference to battlemages popping up in Jamuraa. Also, it shows pretty clearly which parts of Jamuraa have been phased out. Invasion said Teferi took the whole peninsula, and Planeshift showed Talruum was gone, but this is the clearest proof that Suq'ata and Femeref are also fully gone and that the Great Desert now goes straight to the coast. The clickable Invasion map does say that a lot of of Suq'atans were away from home, so presumably these are all merchants who later set up shop elsewhere, explaining how Teferi could go to Suq'ata at the end of Future Sight.

There are also some apparent mistakes on the map: it says that a primeval dragon was awakened in Shiv, when the Shivan primeval was already just a corpse, and that Teferi shifted parts of Jamuraa and Shiv to "an alternate plane", when in reality he removed those regions from the timestream. Since this map came with that little comic, we can easily chalk these mistakes up to Greven's intelligence simply being wrong. 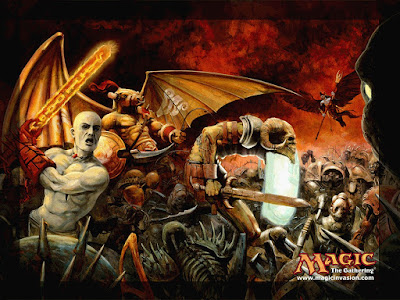 And that is everything of interest on MagicInvasion. Nothing earthshaking for most people, though I personally think those maps are very exciting. Having an official passport picture for Yawgmoth is also nice. Next time, as promised, a clearer picture of him from the official Apocalypse concept art. Although is brought to us by an unofficial source.
Posted by Squirle at 13:06