On this blog we've looked at all issues of The Duelist, and at all the (somewhat) relevant parts of Top Deck, but those were just two publications in a once thriving market of cardgame magazines. So far I've completely ignored the rest. Partially this is because I don't own many of those issues, and I don't really feel like collecting 131 issues of Scrye, 150 issues of InQuest and whatever else is out there without knowing which issues include lore stuff. But mostly it is because these are all third party publications. Often when they talk storyline it is just parroting things from the novels, and when they go beyond that the canonicity is often in doubt.

I wanted to highlight this problem by looking at this specific issue of InQuest. It contains a hype article for the then-imminent release of Apocalypse that became quite famous in storyline circles for containing the only clear picture of Yawgmoth and (for a long time) the only picture of Karn as a planeswalker. The article was written after consulting with a WotC employee, uses concept art that we also saw in the Apocalypse novel, and the description of cards not yet released at the time is spot on. So far, so canon, you'd say. But when we delve into the storyline tidbits we'll find a number of inconsistenties, making things difficult. But let's first just look at this article, so we know what we are talking about. 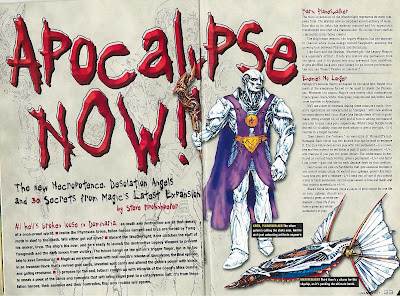 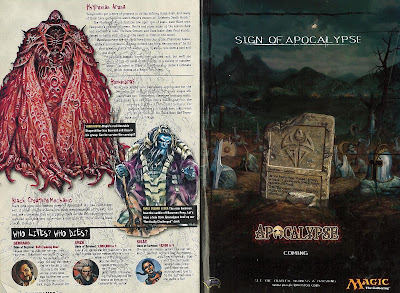 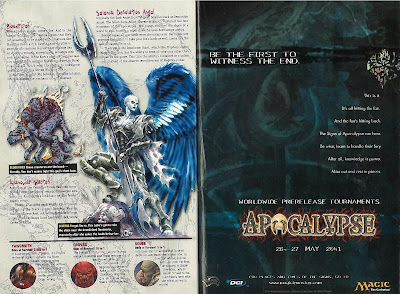 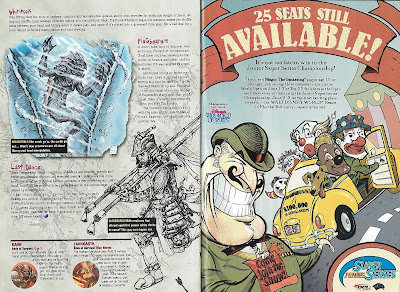 Okay, first things first... I'm buying a better scanner tomorrow. This text isn't nearly as grainy in the magazine as in the scans! But anyway, about that text...

Like I said, this stuff came from Wizards directly. The cards described check out, and so does the art. Those pictures of the Weatherlight and that dwarf actually appear, in uncolored form, in Apocalypse. Plus that picture of Yawgmoth corresponds with that mugshot from the planeshift online comic...

...and Karn's planeswalkerial look would eventually turn up on the cover of Planar Chaos. (By the time he shows up again in the cards he'll be back to walking around naked with shoulder protrusions that cover his ears though) 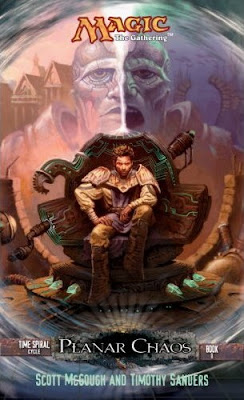 But then there are a bunch of other things that leave me scratching my head. For starters, the article keeps going on about Karn now being in control of the Weatherlight, him having Urza's staff and Sisay being demoted. None of that happens in the novel. Karn is instrumental in the transformation of the Weatherlight, but he remains the engineer and Sisay the captain. (If anything, Sisay was demoted to captain-in-name-only way back in Mercadian Masques, as Gerrard has continued to call the shots after she was released from Rath.) Heck, Karn becomes a planeswalker in the moment the Weatherlight is destroyed, so the description here is wrong on that account as well.

Urza's staff was never significant in the story, just another one of his tools, and it gets quietly forgotten about when he gets into his Titan Engine. In this concept art Karn clearly has it (compare it to the art of Death or Glory for example), but not in the novel. In fact, the staff will turn up in the anthology The Secrets of Magic, where it will be found by Balthor.

Then there is the Selenia situation. We are told that she is back as the Desolation Angel, "Magic's version of the four horsemen of the Apocalypse", while in the novel she is just a ghostly shade. She doesn't look much like the Desolation Angel in this art either. Here she's at least smart enough not to keep her legs exposed in combat. (But still her armor has got massive cleavage. Because reasons.) The whole thing gets more confusing when we consider the art of Last Caress, and how it apparently was an art mistake. 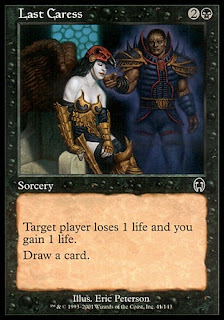 When I brought up the problems with this article on MTGSalvation, it was pointed out that on the Wizards message boards it was revealed that the art was supposed to show a ghostly Selenia caressing a living Crovax, which is a scene from the books. Somehow this ended up as a ghostly Crovax caressing a living Desolation Angel. Unfortunately the Wizards forums have been taken down, so we can't really check that, and we'll probably never know just what kind of miscommunication could make something like that happen. But this artwork in InQuest does show that something was going on with Selenia behind the scenes.

But what? Miscommunication? Last minute re-writes? And what is up with the descriptions here of Karn? Was the InQuest writer given outdated information? Did he misinterpret, or even embellish, things? Again we'll probably never know. But inconsistencies like these do show why I prefer to not review third party sources. The line between storyline facts, mistakes or misinterpretations and fanon is often very blurry. When WotC sources clash we have to sort out what is canon and what not, but with third party sources I prefer to place them all outside of canon altogether. Unless they are confirmed by official sources I guess, but then the official source is what really counts. On a few occasions, like with this issue or the Legends of Magic website, a non-official source gets so big in the community that it does deserve a analysis. But don't hold your breath for me to review all the other issues of InQuest!

Luckily we can pretty easily divorce the pictures (which are backed up by official sources) from the text (which conflicts with official sources), so as far as I'm concerned those pictures of Yawgmoth and Karn do "count". And Selenia... ah well, two out of three ain't bad.

On a lighter note, I'll leave you all with this thing from the front of the issue. I guess it's relevant again now that there actually is a Magic movie being made. 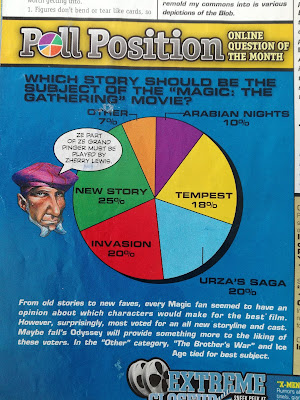 I do have a few questions though...