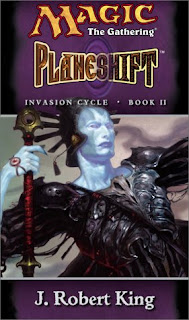 SUMMARY
We pick up directly where the last book left. Everyone is still at Koilos as the Rathi Overlay starts dumping hordes upon hordes of invaders all around. The coalition army braces itself for the oncoming wave, but then the nine titans suddenly planeswalk away, transporting the troops to various positions across the globe. The Weatherlight and the metathran army end up on Urborg, where Crovax has set up shop (after eating Tsabo Tavoc for her failure). Eladamri and his half of the army are taken to Keld, where the Skyshroud forest has just materialized.

Finally, Darigaaz and his dragon army are taken to Shiv where the Phyrexians are trying to kill an ancient dragon encased in stone. Turns out there are 5 of these Primeval Dragons imprisoned across Dominaria, and that they once ruled the world. The Phyrexians succeed in killing the one in Shiv, but Tevesh Szat convinces Darigaaz to release the others to help fight against the invasion. 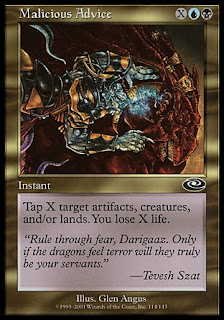 After dropping off the armies the planeswalkers themselves journey to Phyrexia where they plan to install a network of bombs that will destroy the entire plane. They initially make good progress, until they are betrayed. Tevesh Szat seemingly kills Kristina due to accidental friendly fire, but later hunts down Daria when she's out of her Titan Engine to sneak around. Urza then reveals he knew of Szat's betrayal, but didn't do anything. You see, he needed souls to charge his most powerful bombs, but Barrin convinced him killing loads of people to do so would be unethical, thus he convinced himself he needed an a single, immensely powerful criminal instead. Thus he recruited Szat and let him commit crimes against other immortals. Upon this revelation the other planeswalkers just stare at Urza in silence, realizing just how far gone he really is.

In Urborg Agnate is seriously depressed over losing Thaddeus, and nearly gets himself killed in quicksand. However, he is saved by the troops of the lich lord Dralnu. Dralnu takes Thaddeus to the underground city of Vhelnish, where he claims to give fallen soldiers a second shot at glory. The two commanders make an alliance, and Dralnu washes Agnate's feet as part of the alliance ritual. Agnate meanwhile falls badly for Dralnu, seeing him as a replacement for Thaddeus.

While Agnate is gone, the metathran army fares badly. Gerrard, inspired by seeing Tahngarth fight, decides to hop over to Hurloon to recruit an entire army of minotaurs. Unfortunately Hurloon has been completely overrun with Phyrexians who are busy transmuting its inhabitants like they did with Tahngarth back in Rath. The Weatherlight manages to destroy the Phyrexian command there and bring their new army to Urborg. During a short moment of rest the saved minotaurs gather to honor Tahngarth, who had been dreading facing others of his species since his mutilation. 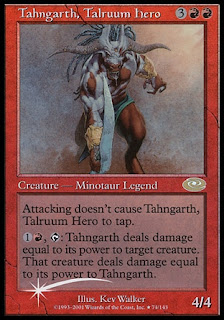 In Keld Eladamri meets up with Astor, the warlord from Myths of Magic, but their armies don't fare well. The losing battle turns into a rout when the Keldon Twilight prophecy comes true and the warlords of old rise... only to start fighting for the side of the Phyrexians. Then things get weird. The cudgel of Doyenne Tajamin hits one of the resurrected warlords, but this holy cudgel can't handle the sacrilege of that act and starts burning red hot. She tosses the thing away and it melts the entire glacier the fight takes place upon. The Phyrexians and zombies die, as do a lot of the coalition forces, but a number of the good guys survive, ending up in a huge underground cave where they are saved by the Golden Argosy, the ship of Kradak, the founder of Keld. Most of the Keldons then leave the ship again to rebuild their home, but Eladamri and his troops enter a dreamlike state and are whisked away to Urborg by the Argosy.

There things are not going much better. Agnate discovers he is dying, as Dralnu has infected him with a wasting disease when he washed his feet. Eventually he signs over his part of the army to Grizzlegom, the commander of the Hurloon forces, who immediately has Dralnu and his troops destroyed. Meanwhile the Predator attacks the Weatherlight. Tahngarth manages to kill Greven il-Vec and Sisay dumps the disabled ship into the Stronghold volcano. But in the chaos Gerrard and Squee are captured by Ertai and brought to Crovax's throne room. 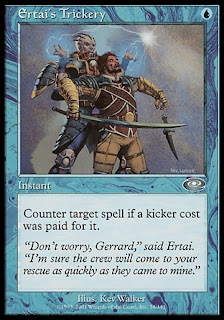 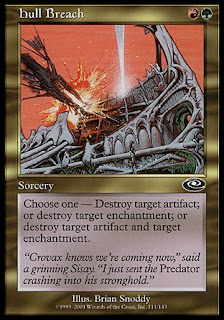 While all this is going on Darigaaz is paying little attention to the Phyrexians. Instead he journeys across the globe to awaken the Primevals. But this proces brings out a darkness in him. First he awakens Rith in Yavimaya, but this requires the sacrifice of the lord of the black dragons. The awakening of Treva in New Argive requires the sacrifice of all the other dragon lords, and in the proces of awakening Dromar in the ruins of Old Vodalia countless dragons die as well. But as the Primevals awaken, Darigaaz also feels power growing inside himself. As it turns out, he actually is a Primeval himself: a reincarnation of the original red Primeval, recreated to awaken the others. Finally the four Primevals head to Urborg to awaken the fifth: Crosis. They sacrifice themselves, but are then reborn, more powerful than ever. Immediately they start killing Phyrexians and coalition forces alike, seeking to reconquer Dominaria.

Darigaaz himself attack the Weatherlight, where he is confronted with Karn, whose memories have begun to come back ever since he broke his vow of pacifism in the last book. Karn reaches out to Darigaaz, and manages to pierce the bloodlust of the Primevals. Darigaaz kills himself in order to break the Primeval's chain of power. Then Rith is re-devoured by the giant treefolk in which she had been imprisoned (revealed next novel to by Nemata), who had followed her all the way from Yavimaya. The Weatherlight drives Crosis back into his tar pit prison, but crashes in the proces, after which Treva and Dromar are killed by the dragon nations. 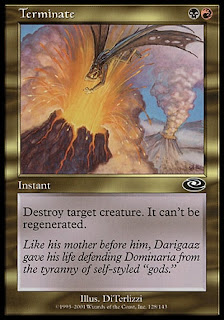 Back in the Stronghold, Crovax tells Gerrard Yawgmoth has the power over life and death, and promises the rebirth of Hanna if Gerrard joins the Phyrexians. To prove this, he kills Squee, who is then resurrected. He also tries to demoralize Gerrard by showing him how Agnate and Darigaaz both fell to evil temptations, and then reveals the true bombshell: so did Urza!

While journeying through Phyrexia Urza started getting more paranoid. Shaken by Barrin's death, enamored by Phyrexia's beauty and dismayed by the glee with which his companions would destroy that beauty, he eventually fell to Yawgmoth's attempts to convert him. He killed Taysir when that planeswalker tried to stop him, and even succeeded the final test Yawgmoth gave him by walking away when he was shown Mishra, who apparently has been tortured for millennia in the depths of Phyrexia.

Having heard all this, Gerrard stepts through a portal into the ninth sphere of Phyrexian where he and Urza bow before Yawgmoth himself. 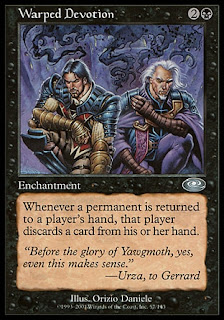 Then, just as every hope seems lost, Karn emerges from the wreckage of the Weatherlight with the Thran Tome, saying he knows what must be done to save the world. To be concluded! 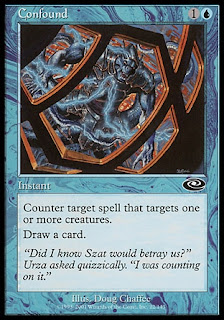 "Darigaaz reeled at that touch. What was this? Divinity was awakening in Karn. Power undeniable. The silver man had lived a forgetful millenium, but now that his memories were returning, they were transforming him. Memory was creating this fledgling god, and with a touch, Karn awoke Darigaaz's own memories" 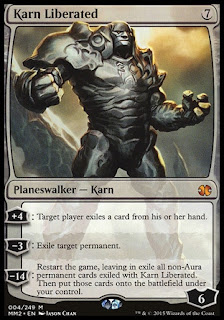 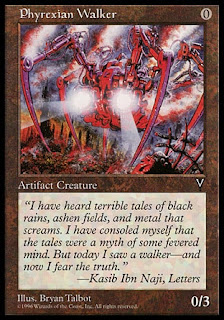 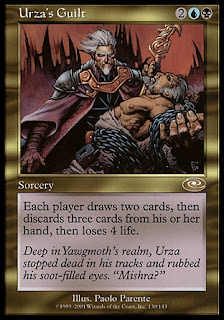 "When I was growing up, I thought you'd never understand me. If I'd known all it took was your murder and immolation, I would have done it sooner."

"The Golden Argosy, ship of titans. It was stolen from the lords of Parma by Kradak, first doyen of our people. In it, he sailed all the world and claimed it for Keld. This was before the other races spilled out across the land, stealing it. Since that time, we have journeyed afar to regain the lands that are ours."

"While most Phyrexians were creatures of flesh and machine, Yawgmoth's Inner Circle belonged to another phylum entirely. The pneumagogs dwelt between the physical and the metaphysical worlds. They had bodies, yes - red-shelled bodies of living metal. Their insectoid legs could gallop across ground, and their rasping wings could slice through air. But these mechanisms were only the loci of their being, rooting them in time and space. Pneumagog bodies were wrapped in layer upon layer of scintillating spirit. This was the true essence of pneumagogs - brilliant, glowing, emphatic souls. Nowhere else in all the Nine Spheres did pneumagogs exist fully. When they ascended to higher spheres, only their living-metal bodies went. When they descended to lower spheres, only their spirits went. In was here, in the sixth sphere, that they were a glorious amalgam of physic and metaphysic."

We get a bunch of information on them throughout the novel. But too be honest, it's all a bit muddled, and most of it just seems to by self-made mythology rather than actual facts.


Well check back on all that to see how it fits with future revelations in the Legions review.

That is everything for now. Check back next week when I wrap-up Apocalypse and review the entire cycle!
Posted by Squirle at 20:19