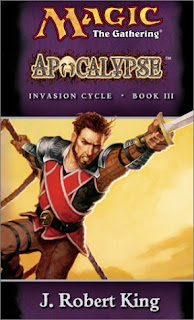 SUMMARY
We open up on Gerrard and Urza kneeling in front of Yawgmoth in the Ninth Sphere, which has been formed into an arena. Yawgmoth tells the two to fight for their greatest desire: the resurrection of Hanna and the chance to study under Yawgmoth respectively. So they do. For almost half the book. Urza has a number of near-wins, but each time Yawgmoth comes up with a reason why it doesn't count. During the fight Gerrard learns to manipulate the flowstone all around him and eventually he manages to decapitate Urza. Yawgmoth then blesses Gerrard with a tenfold increase in strength, endurance, intelligence and will. But Gerrard had shaken off the command of Yawgmoth during the battle, and when it looks like Hanna comes forward to collect Urza's head, he strikes her with his halberd instead, correctly guessing that the Hanna-simulacrum would be where Yawgmoth hid his essence. Before he can follow it up with a killing blow Yawgmoth ejects him from Phyrexia, back to the Stronghold. 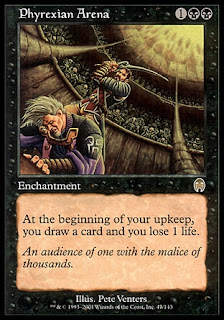 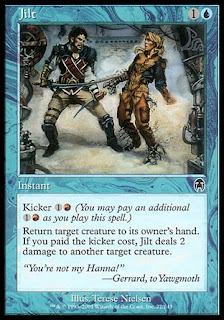 Meanwhile on Dominaria, Karn reveals what he meant by that last line in Planeshift. Apparently he threw the Thran Tome across the room in a fit of rage and discovered a secret way of opening it. Combined with his regained memory this allows him to get new secrets out of the magic book, including a full history of the Bloodlines and the Legacy. He then says that the Thran Tome contains the memory of the Weatherlight and that it will transform the ship in the same way his own memories have tranformed him. Then suddenly there is light beaming out of the book and the Weatherlight starts repairing itself. It comes out stronger and faster than ever, and gains sentience!

(And if you think that's really vague and would like more of an explanation... well, so would I. But let's wait for the review to start complaining!)

Now that the ship is sentient, Multani can no longer live in its wood, as he had been doing since rendezvousing with the crew in Invasion, so he heads home to Yavimaya, only to discover it has been completely spared since the first wave of invaders was defeated. Thus he decides to sacrifice himself (he will regrow eventually, but he's not sure whether that will take decades or even centuries) to transport part of Yavimaya and its fighters to Urborg. Aided by these new arrivals Eladamri, Li(i)n Siv(v)i and Grizzlegom fight their way into the Stronghold volcano. On their way there they discover a bunch of dwarves who plan on activating the volcano to destroy the Phyrexian command center. 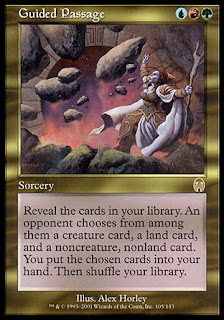 After being dumped into the Stronghold Gerrard chases away Ertai and is reunited with Squee, who is now effectively immortal, coming back from the dead every time he is killed. Ertai summons Crovax back from the battlefield, and he and Gerrard have a long, drawn out slugfest. Ertai meanwhile returns to his rejuvenation chamber, but Squee follows him and fiddles with the controls, killing the wizard. Gerrard eventually kills Crovax, but is then faced with hordes of Stronghold forces. Luckily Urza's head suddenly springs to life and kills all those new arrivals with his eye-beams. Then the rest of the Weatherlight crew and the Coalition forces arrive and all the good guys make their escape, just as the dwarves trigger the volcano. 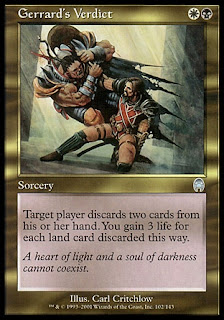 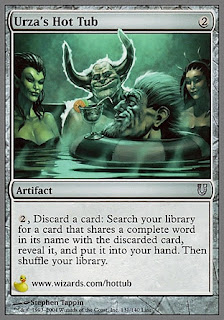 While all this is going on the remaining Titans, Freyalise, Lord Windgrace, Bo Levar and Commodore Guff, have been going around and detonating the bombs they hid throughout Phyrexia manually, as Urza destroyed the master switch when he switched sides last novel. They succeed, but as they watch Phyrexia collapse in on itself Guff reveals that he knows the future because he edited the story, and let's slip that none of this matters since Yawgmoth is moving into Dominaria anyway. Just before the lava consumes it, he emerges from the portal inside the Stronghold in the form af a gigantic cloud that kills whatever it touches and resurrects the dead.

Bo Levar talks some sense into Guff and gets him to erase the story he approved, leaving the ending open. Just after he does the death cloud eats him. Levar decides to sacrifice himself to save a merfolk artist colony from the cloud. Freyalise spends her supposed last moments in the Skyshroud forest, while Lord Windgrace takes Grizzlegom and a small part the Hurloon army home for once last fight. The rest of the Coalition army is destroyed either by the cloud, or by gigantic humus elementals that form when Yawgmoth resurrects the dead soil on Urborg. Eladamri and Li(i)n Siv(v)i commit suicide by jumping from a magnigoth treefolk, as a last act of defying Yawgmoth. 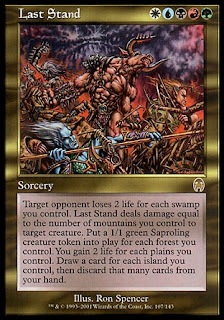 In the end the whole book devolves into a series of failed plans to stop Yawgmoth. First the Weatherlight crashes a Phyrexian ship into the Stronghold volcano to prevent Yawgmoth from escaping it. But that fails as he just oozes around it. Then Urza suggests a really bizarre plan, saying that the Legacy artifacts contain many worlds, while Gerrard somehow contains many heroes. He wants to crack open both, destroying half of Dominaria by letting out those planes, and then having the army of heroes that would spring from Gerrard's head reconquer the other hemisphere. Sisay thinks it's all nonsense, saying Urza just came up with another Sylex Blast. So instead they go with another plan, which involves cracking the Null Moon, which has been collecting white mana ever since Thran times. They fly through it, sacrificing the Weatherlight to channel the energy into a Yawgmoth-killing blast... only for that to barely makes a dent in him. Then Gerrard and Urza come up with a post-last-ditch idea, rip Urza's eyes out and place them in Karn's chest. Which results in a big light and thus Yawgmoth is defeated. Somehow. All over Dominaria the Phyrexian forces go catatonic after the death of their leader, allowing even children to kill them.

One years later the people of Dominaria gather at Urborg to see Freyalise unveil a monument to the fallen. There the Weatherlight crew is visited by Karn, who has merged with Urza, Gerrard and the entire Legacy and has become a planeswalker. He takes Orim to Mercadia so she can marry Cho-Manno. Sisay, Tahngarth and Squee leave for more adventures on a new ship, which they dub the Victory. 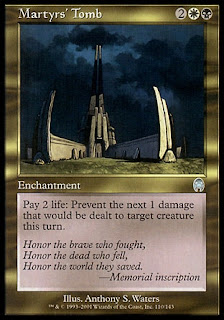 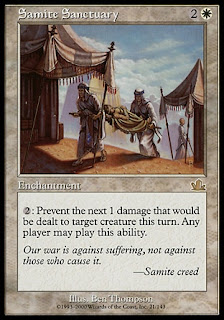 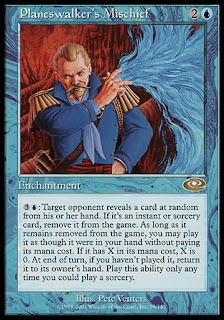 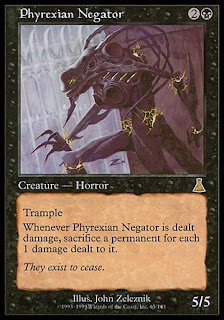 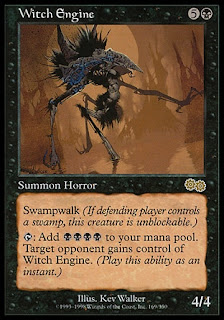 And that was Apocalypse! As you've probably noticed, I only barely manged to stop myself from launching into a review, so I'd better get to work on writing that out immediately. My aim is to put the review of the entire Invasion cycle up tomorrow. See you then!
Posted by Squirle at 14:00