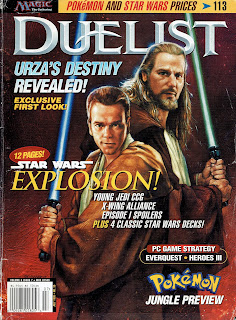 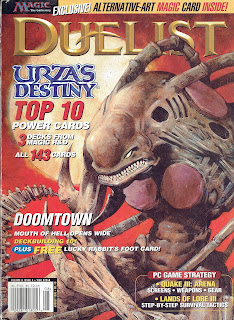 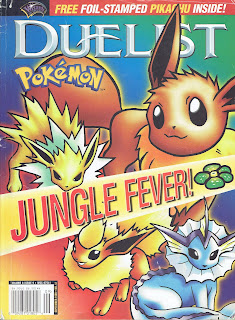 And so we reach the final issues of The Duelist. To be honest, there is very little of interest for us here, but as you know I am a completist and I've done all the other issues of this magazine, so let's take a look anyway.

Issue 40 sees the final installment of Forgotten Lore, this time covering Yavimaya. It's really just a summary of the Multani and Rofellos plot from Bloodlines. Do watch out from some unfortunately formulated language in the first paragraph though. It says "The main forested river valley of Terisiare became Yavimaya, the semi-tropical forest island". That could be read as "a valley called Terisiare became an island called Yavimaya." Of course, we know that Terisiare is a continent, and that Yavimaya was already around during the Ice Age. What it is trying to say is that the river valley called Yavimaya turned into an island. 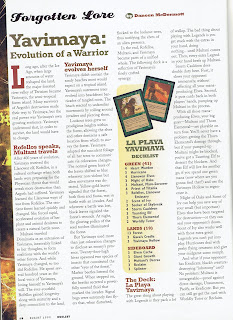 That same issue also has an article called "Urza's Moment of Destiny", which is just a summary of the whole of Bloodlines.

...and that's it. Told you there wasn't much. Clearly the storyline team were putting all their chips on the novel line at this point. As a result you will see that from here on out this blog will mostly be dealing with books. There will be a few articles or comics worth mentioning, but those are all very minor, most of them primarily serving as advertisements for the novels. This situation will pretty much stay the same until the launch of the Savor the Flavor articles, which wont be until Kamigawa block! 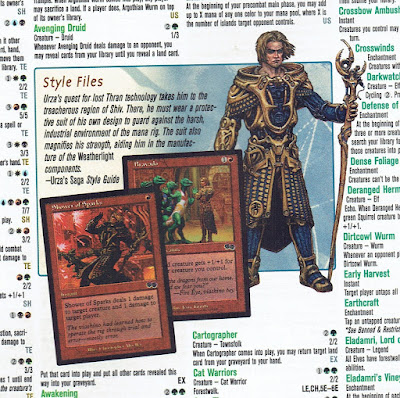 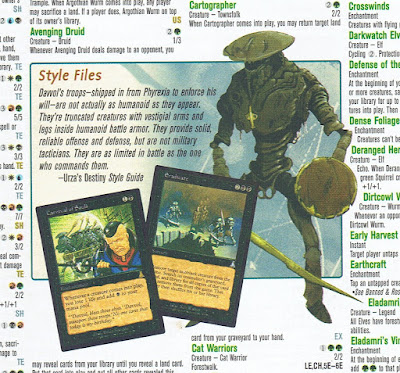 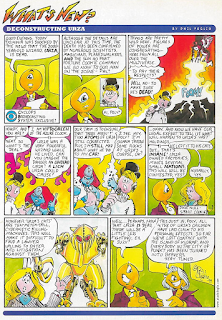 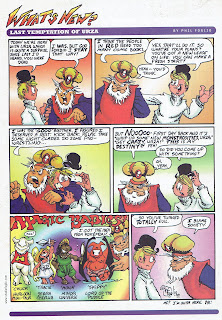 FINAL THOUGHTS
The Duelist goes out in Pokemon style. An entire issue filled with nothing but articles about those adorable little critters. I honestly don't mind that much, Pokemon was hot at the time, I played it myself back then, so I get you want to do a themed issued dedicated to them. But it is a shame that The Duelist, which often had amazing cover art, goes out with such a horrible cover. You can almost see the pixels!

In his opening column for issue 39 Will McDermott announces that after the Pokemon issue The Duelist will be ending as a magazine and going fully digital instead. That didn't really happen though. Magicthegathering.com was launched in early 2000, but if you trawl through the archived pages (the MTGSally wiki has some links) you'll see it wasn't much of a successor to the magazine. Mostly it just had some rules stuff and announcements of new releases. It wasn't until 2002 that the website adopted its now-famous daily article format.

Instead, The Duelist had something of a reboot. First there was a magazine called "Duelist presents MAGIC: the Gathering Mercadian Masques". It is generally not counted as an issue of The Duelist (Neither the MTGSally wiki nor the Magic Librarities gallery mention it), but the information around the barcode just says "Volume 6 issue 10", as if it continued directly from The Duelist issue 41. After that the magazine Top Deck was launched, which would hold on for another 12 issues before being cancelled. It was a more kid friendly publication, most issues spending about half their pages on Pokemon. Well, at least that means we're rid of sexist advertisements...

For us Vorthosi though, there really is only one interesting thing in Top Deck, and that is that they printed a handful of comics promoting the Masques block and Invasion novels. I will obviously be looking at those, but they will be short reviews because they, as I mentioned above, are really just advertisements for the novels; just one scene that ends with a "read the book for the rest of the story!" plug at the end.

But I'm getting ahead of myself. The first comic is advertising Mercadian Masques, but before I can talk about that I've got one last Urza's block short story to review, and after that I'll take a detour into the Ice Age cycle novels.
Posted by Squirle at 18:40