This is the conclusion of my look at the Ice Age comic. You can find the summary and review of the story here. In this installment I'll cover the continuity and timeline issues associated with it.

THE BIG QUESTION
Let's start with the really big question: Is this comic even still in continuity? Two weeks ago we looked at the comics telling the story of Antiquities and I said they were no longer canon because the novel The Brothers' War replaced them. This isn't a controversial statement. The novel says as much in its introduction, it covers exactly the same things as the comics, and later stories are build upon the novel, not the comic. The replacement is thus complete and neatly done.

The situation surrounding Ice Age is a bit more complex. Wizards released the novel The Eternal Ice, but it only tells the story of Kjeldor's battle against Lim-Dûl. It does so in a way that completely contradicts issue two of the comic. The Summit of the Null Moon is not shown, but Freyalise does pop in every now and again and in the end she casts the World Spell and there are allusions to the events of the comic. For example, at the casting of the World Spell Kolbjörn and a girl the main characters think must be his adopted daughter show up, a clear reference to Kaysa. Tevesh Szat's plan to freeze Dominaria isn't shown either, but at one point Arcum Dagson turns up with his magical weathervane, which foretells the winter lasting forever, a hint that Szat's plan still happened behind the scenes. Later, in Invasion, Szat confirms this.

My preference is to say that The Eternal Ice just replaced issue two of Ice Age, and that the other three issues are still in continuity. Mostly this works out fine. Unfortunately Lim-Dûl has a few cameo appearances in issues three and four, and becomes a main character again in the Shandalar comic. Those appearances can't be squared with The Eternal Ice in any way, so we're caught between a rock and a hard place here. Either we say the last two issues of Ice Age are still in continuity, but riddled with continuity errors, or we strike them from continuity, but then we're left with the bizarre situation where some of the most important events in the canon are not told in any in-continuity stories.

For my project I have decided the first is the lesser of two evils. Thus I've still put the Ice Age comics on my timeline, except for issue two, and in this entry I'll list which parts of them are contradicted by The Eternal Ice.


First, a quick run through the differences between the two tellings. In issue two of the comic Lim-Dûl is transformed into a monstrous form, faces a small group of Kjeldoran knights and is imprisoned in an Icy Prison. It's unclear when this happened exactly, but from Leshrac's comments it may be as much as a few years before the Summit of the Null Moon. During that Summit Dûl is freed from his prison, a side effects of Freyalise and Szat having their duel. A few weeks later, at the same time Freyalise is casting the World Spell, Dûl turns up with an army of undead at the ruins of Storgard, just in time to witness Szat being defeated by the Amulet of Quoz. Szat flees to Shandalar, taking Lim-Dûl along. In the first issue of Shandalar we'll see that Leshrac has been hanging around on Shandalar since the Summit, with Szat and Dûl turning up a few weeks later.

In The Eternal Ice we'll first see Dûl, still in human form, a few weeks before the World Spell is cast. Over the course of the novel he'll be turned into a monstrous form, but faces no Kjeldoran knights and isn't put in any kind of prison either. On the day of the World Spell he leads his armies not to Storgard but against Kjeldor. In the aftermath of his defeat Leshrac turns up and takes Dûl to Shandalar. Szat isn't present at all. Also of note: Shandalar's approach is discovered during the course of the novel, meaning the Summit has to take place sometime during its events. So we can't even make a strange timeline in which Dûl is turned into a monster, put onto ice, is freed during the Summit, somehow turned back into human and then stars in The Eternal Ice only to be turned into a monster again. Heck, doing that wouldn't even solve his appearances while the World Spell is being cast, when he's supposed to be at both Storgard and Kjeld at the same time, only to be taken to Shandalar by both Szat and Leshrac simultaneously!

What does that mean for the individual issues of Ice Age?

So yeah... in the end there is no neat solution. Even if we accept the (fairly outlandish) double Dûl theory, we still have to remove pages from Shandalar from continuity. We'll just have to read these comics, try to mentally block out any appearance of Lim-Dûl, and keep telling ourselves "this is kinda how things happened, but not entirely". Not very satisfactory, I know, but what are you going to do? 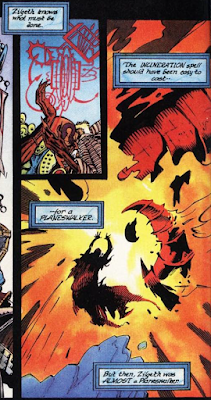 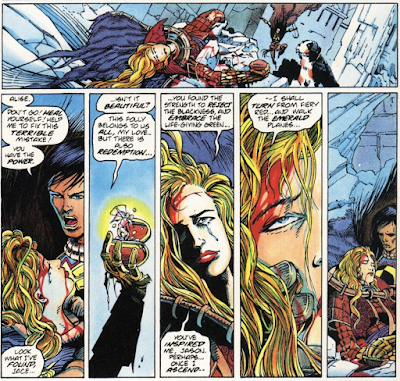 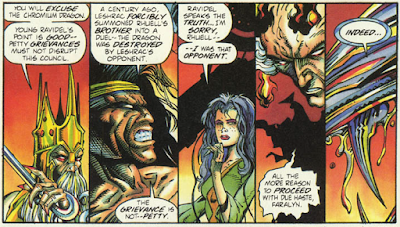 TIMELINE
Like with Fallen Empires, this comic starts with a blurb telling us when it happens. Again like Fallen Empires, it’s not a date that made it through the Revision. 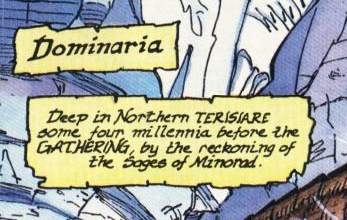 We’ll get to what “The Gathering of the Sages of Minorad” actually is, and when it happened (the placement itself is a somewhat tricky one) when we get to Wayfarer, but for now I'll note that we can say with certainty that it has to occur before the Phyrexian Invasion, so if this comic happens four millenia before that, it should happen before the Ice Age even started, probably even before the Brothers’ War. Obviously that's not the case, so we'll ignore this comment. The official Wizards timeline trumps the older dates.

Similarly, the blurb in issue three saying the planeswalkers have been trapped for “Ten centuries” has also been invalidated by the revisionist timeline.

Luckily there is nothing that contradicts the repeated mentions from the second issue that five hundred years have passed between the fall of Storgard and the age of Kjeldor and Lim-Dûl. I'm particularly glad that Tevesh Szat repeats this in issue four, since it means we still have a relevant source for that date even if we strike issue two from continuity altogether. Since the official timeline places the end of the Ice Age in 2934 we can place issue one at +/- 2400, issues three and four in 2934 itself, and issue two... if you want to include it, it should happen shortly before 2934, since Leshrac mentions the Summit of the Null Moon will happen "in a year... or five".

FINAL THOUGHTS
Whew! That was it then, everything I could say about the Ice Age comics! Even with all the continuity baggage, this comic series is pivotal in the canon and very enjoyable in itself, and thus mandatory reading for any Magic the Gathering storyline fan! Funnily enough I can say the same about The Eternal Ice, which is a great novel but causes all sorts of continuity issues when put next to this comic, or next to all the references to the Sages of Lat-Nam in the Harper Prism novels.

The review of The Eternal Ice is still a long way of though. The coming weeks I'll be looking at the stories that were written while Ice Age was still very much in continuity. Next up we'll check in on the plane where all these planeswalkers are fleeing towards: Shandalar!
Posted by Squirle at 01:17