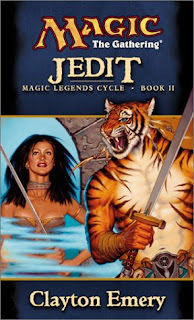 SUMMARY
At the end of last book Johan set of east across the Sukurvian Desert on the back of a drake to look for Efrava, the home of the tiger warriors. Now his drake crashes at the edge of the desert and Johan is saved from being eaten by sand wurms by Jedit Ojanen, the son of Jaeger. Using some sorcery Johan manages to convince the tigers not to kill him, and he is allowed to wander the Efravan oasis accompanied by Jedit and his friend Hestia. While this goes on Jedit's mom has a vision about the Prophecy of None, One and Two, which convinces her that Johan must be imprisoned. But the mage escapes, and with some lies about having fought side by side with Jaeger he convinces Jedit to come along with him back to the human realms.
They eventually arrive in Bryce, where Johan tricks Jedit into trying to kill Adira Strongheart and Hazezon Tamar. They and their friends manage to subdue Jedit and reveal the truth to him about his father and Johan. Everyone chases after the evil wizard, who flees into the western desert. There he has a vision of a pretty lady named Shauku, who claims to have a book on the origin of the tiger-warriors in her library. Johan goes back to Tirras to gather a crew, and then sets of to find this library. Jedit, Adira and her Circle of Seven follow, wanting to end the threat of Johan once and for all. Johan leaves behind some minions to stop his pursuers, but those are all defeated. (Sometimes at the cost of another few members of the Circle.) 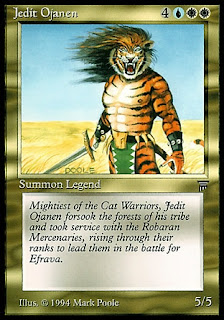 They eventually find Shauku's lair, the Caverns of Despair, in a forest called Arboria, but her story turns out to be a trap. She doesn't have a library, but an imprisoned Cosmic Horror which she uses to gain otherworldly knowledge. Furthermore, she has imprisoned Johan in an Amber Prison next to the Horror to suffuse him with its knowledge and power, planning to use him as a puppet to conquer Jamuraa for herself. The good guys try to stop this, but Shauku is simply to strong. Adira frees Johan, hoping the mage could tip the scales, but instead he just runs away. The day is only saved when the wall of fire around the Cosmic Horror is breached, allowing its power to get out. It realizes it can't escape so decides to call down a meteor to commit suicide by crushing the entire building. Most of the good guys get out, and they head back home.

REVIEW
Johan had a number of pointless divergences, like the island of slavers and the underground merfolk.
This book steps it up even further, by making its entire second half a pointless divergence. The beginning sets up Johan's interest in Efrava and introduces Jedit to Adira's crew, but after that? Shauku says she has a book on the history of the cat-warriors, but that turns out to be a lie to lure Johan. She just wants him as a minion. Then she is defeated and (spoilers) will not play any role in the next book. So from the moment Johan runs into the western desert this novel has nothing to do the rest of the trilogy. Clayton Emery must really have been reaching to find a way to fill the pages.

It's not all doom and gloom however. Emery clearly wasn't that interested in the whole Jedit Ojanen plot, and it showed in his writing. When he gets to leave that behind though, he seems to come alive. An ancient vampire who is powerful enough to kill people just by telling them to die? Gaining knowledge by draining the life fluids of a horror from beyond the stars?  Said horror then committing suicide by calling down a falling star that destroys Shauku's entire lair? This is all a hundred times more epic than Johan's bumbling attempts at conquest! Big, out-there ideas, an actually really menacing bad guy, links to the larger Magic canon by importing a character from Mirage? Awesome! This is what I want to read, and I would've loved to see Emery devote an entire book to that plot. So I can easily forgive the fact that it has nothing to do with the rest of the trilogy! 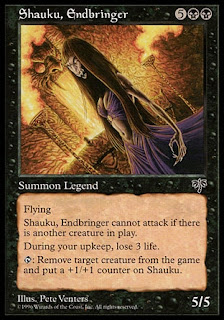 Unfortunately even in this divergence there is padding, as the pointless battles Adira and her crew fight against Johan's minions on the road to Arboria and with random Floral Spuzzem's inside that forest go on for far too long and add nothing to the story other than killing of a few more of her boring crewmen so they can be replaced with new characters, who somehow end up being exactly as boring as their predecessors.

Speaking of the characters, once again Johan is by far the weakest part of the story. This supposedly charismatic, manipulative trickster comes across as a frustrated loser who loses his temper at the drop of a hat. In the comic he actually befriended Jedit, simply be showing interest his his stories and by feeding his curiosity about the outside world. Here he is such a thin-skinned, un-diplomatic arse that has to rely on charm spells to befriend the tigers. And that's only the beginning. At the end of the book, when Adira releases him so he can help fight against Shauku, the text literally has him hiking up his skirts to run away. At that point there is no longer any chance of saving the character for me. All I can see is him running in and out of corridors, chased by Scooby-Doo. But possibly his worst showing is when he and Jedit reach Palmyra. Once again we are still told of his plans within plans, but here his whole idea seems to be to send Jedit to attack Hazezon, Adira and a room full of their most loyal companions, while, get this, STAYING IN THE ALLEY OUTSIDE, PEEKING IN THROUGH THE WINDOW! Which obviously ends with the crew subduing Jedit, then looking outside and immediately seeing him and discovering he's not dead. This idiot even killed one of his own minions just a few pages prior to this to keep his survival a secret, only to immediately blow his cover afterwards, for no good reason at all!

Honestly, Johan is such a terribly written bad guy, that I almost wonder if Emery deliberately wrote him as a Saturday morning cartoon villain. He did seem to have some contempt for him in that article I linked to last time, thinking it silly that a powerful wizard can't teleport, and his work on Shauku shows that he can write a villain who is genuinely smart, scheming and menacing.

Okay, enough complaining about stuff I already mentioned last time. There is actually one more thing that really started to annoy me over the course of this novel: if this is Jamuraa, why are so many people in it white?

The early settings of Magic (Aerona, Terisiare, Corondor, Sarpadia, Ulgrotha, Shandalar) almost all had a bad case of "standard fantasy world demographics": 90% white people, maybe one tribe hanging around with more Middle-Eastern influences (Fallaji, Whirling Dervishes), and some random black individuals with no explanation on how they got there. The only exception to that was of course the Arabian Nights setting. That is obviously bad representation, but it is also terrible worldbuilding. How on earth can Dominaria end up with that demographic spread on every one of its continents?!

Then we got to Mirage, and we learned there was a massive supercontinent straddling the equator, filled with cultures based on African and Middle Eastern influences. The sheer size of it makes the demographics of Dominaria as a whole a lot more realistic, though the fact that it was only featured in a handful of sets left some more work to be done to balance out the earlier representation issues. Well, here we have a trilogy set on Jamuraa, that should help fix things, right?

Well, not really. Not if you introduce a tribe of blonde, blue-eyed barbarians living in the mountains above Tirras, and another bunch of blond, blue-eyed people living in Buzzard's Bay on the western coast. And while you technically could argue that the book only rarely actually describes the color of someone's skin, in the few cases that it does it is always for the characters with "dusky" or "ebony" skin, which should tell you everything you need to know about what the assumed skin-color of everyone else is. This is also a problem in the comics, but this adaptation should've been used to fix this. They've ignored too much of the rest of the comics for that to be an excuse.

It's a really big missed opportunity if you ask me, but I guess we could use the "white people are the default" attitude of the book against it. I'm just going to assume that every character whose skin isn't mentioned is black. At least that way we can get some halfway sensible demographics on Dominaria! 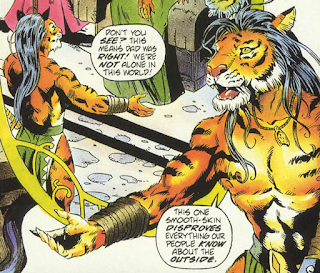 "When None, One and Two clash, only Two shall remain to usher in a new age." 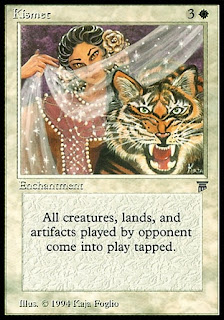 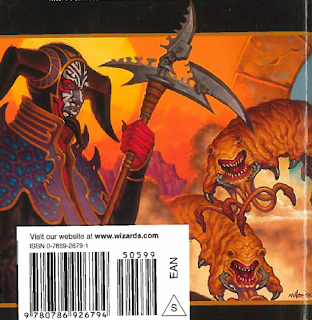 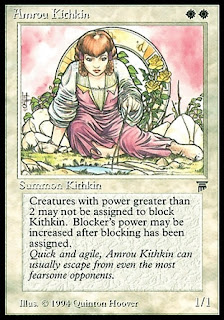 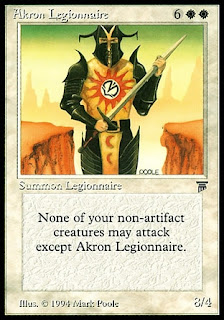 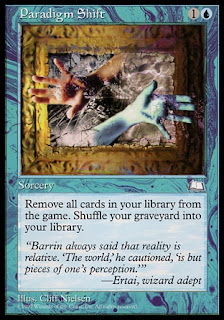 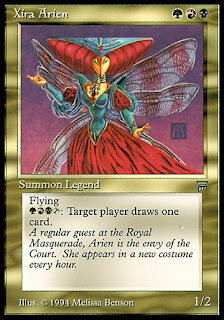 "Wurms were decadent dragons, so the legends said. Once mighty, long-ago elder wurms had, for cowardice or sloth, been stripped of their wings and memories and magic and cursed to live underground where no one would see them." 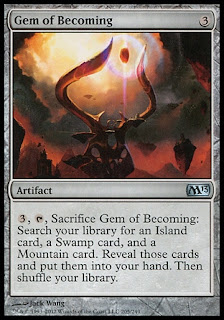 TIMELINE
This book begins only 4 days after the last one. In the comic Jedit says he waited for 3 years for his father to come back. It seems that time has been shortened immensely (unless Jaeger took a huuuuuge detour to reach Bryce) but of course any inconsistencies here don't matter, as the novel simply replaces the book.

This book again states that it has been "400 years since the glaciers vanished overnight", so that's nice and consistent. One possible point of interest: Buzzard's Bay is also 400 years old, so its creation is  probably linked to the Ice Age ending. It's a very minor place that never gets mentioned again, so "point of interest" is a relative term, but still. Worthy of at least a mention here, though not on the timeline.
Posted by Squirle at 12:15