After Mercadian Masques, Nemesis and Prophecy, Invasion was the last Kev Walker comic published before TopDeck was discontinued. Like all its predecessors it is very well drawn, but only contains the very start of a story. The Weatherlight finds Phyrexians, goes to Rath to fight them at the source, is overwhelmed but escapes... buy the book to find out what happens next! 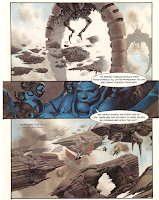 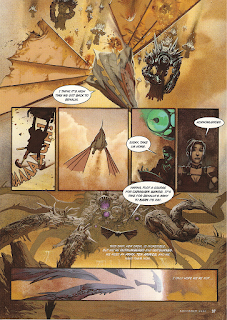 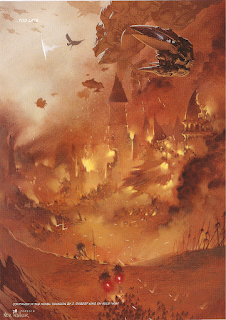 If you don't feel like opening all these pictures separately, you can also go over to www.MagicInvasion.com to find a (barely) animated version. It's under "Invasion" and then "Story". We'll get back to that website after I've covered the book trilogy though.

Actually, this comic deviates a bit more from the novel then the previous ones. There the Weatherlight goes to Rath with a much clearer goal in mind: to destroy the Phyrexian portal ships, which only exist on that side. On Dominaria the portals just manifest as big gaps in the air. (Despite what you might have seen on the cards, which clearly show the portal ships on Dominaria as well.) 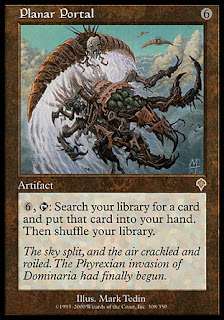 And while this comic ends with Benalia well and truly Routed as the Weatherlight arrives, in the novel they actually arrive before the Phyrexians but get thrown in jail because Gerrard is seen as a dirty stinking deserter, with Benalia City being overrun as the crew sits in their cells.

As always I'm going to say that no matter how pretty it is, the comic is the non-canonical version of the story, with the novel being the one that counts. But it is a very good way of generating excitement, that's for sure!
Posted by Squirle at 22:08