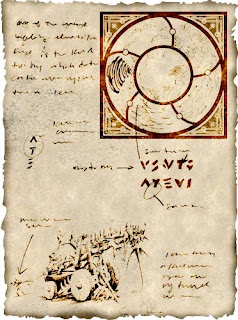 SUMMARY
Eh... Barrin writes a note about going to Jamuraa.

Perhaps I should figure out a new format for these mini-reviews...

REVIEW, TRIVIA, CONTINUITY & TIMELINE
Another expansion set, another small flavor tidbit for the website. You can find it here, on the archived Prophecy product page. Like the Nemesis online story it is too short to do a proper review of it. It looks like a random note Barrin could have written, so... it succeeds in what it sets out to do, I guess?

That said, I do like this "story", as it hits on a lot of things in a very short space. It builds up the Invasion and it references back to the way Urza let Gatha do his thing in Keld back in Bloodlines. Furthermore, it gives a minimal amount of flavor to some of the main features of the Prophecy expansion that don't even get a mention in the novel. Barrin mentions wanting to study Rhystic magic, and that the Avatars (which were the face of the set) are beings that manifest at the site of "particularly intense battles". It's not much, but it is better than nothing. 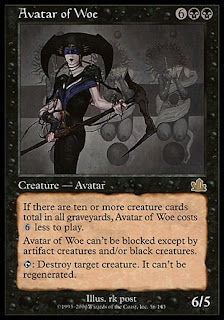 As I noted in the Nemesis review while discussing Lin Sivvi/Liin Sivi's name, it seems that the continuity department and Magic R&D have started drifting away from each other at this point. The novels appear to be written with only an outline of the set in mind, while these short stories are written after the set's completion, and thus have a better idea of what to reference. You saw this in the Nemesis online story as well, as it mentioned the Laccolith and the Parallax cards, which were prominent in the set but absent from the novel. We'll see this escalate over time, until Onslaught block has novels that have nothing to do with what is going on in the sets, with the story that was shown on the cards only being explained on website articles.

There isn't much to say about continuity and the timeline here. The journal was clearly written in 4205, between Barrin's appearances in A Time for Remembrance and Prophecy. Other than the already mentioned reference to Bloodlines there isn't much continuity, and even that reference is pretty vague. I do like the little map Barrin drew, as it gives us a teensy bit more info on this region of Jamuraa, like the location of Arsenal City. The drawings around the map seem to be intended as visual clues for Rhystic magic. The oily squiggles labelled "black" appear on Rhystic Syphon and Rhystic Tutor, while the crystaline stuff labelled "white" look like the base of Rhystic Shield, and a bit like Glittering Lynx. 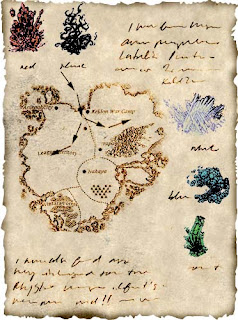 Clearly the Invasion is almost upon us. But before that, we need to go back to the very beginning. It is time to finally learn the origin of Yawgmoth and the fall of the Thran!
Posted by Squirle at 18:07