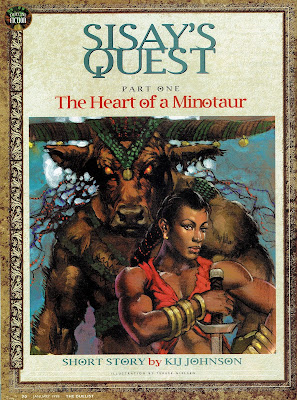 Part one: The Heart of a Minotaur
Part two: The Knife's Edge
Part three: Old Wars
Written by Kij Johnson
Appeared in The Duelist #21, 23 & 25.

SUMMARY
The Weatherlight is en route to Oneah,where they hope to get info on a piece of the Legacy: the Juju Bubble. (Yeah, I know. Not the most epic of the Legacy items.) Unfortunately they fly to close to a dragon's lair and get in a fight, ending up crashed in a forest. To make things worse, it is in Talruum Minotaur terrain, and the Talruum kill any intruders. To try and get out of this, Sisay challenges them to single combat. This would've ended pretty badly, as no one in Sisay's camp can stand up to a minotaur, but a Talruum youngster called Tahngarth intervenes. He finds the idea of killing weak outsiders dishonorable, and thus decides to be Sisay's champion. Tahngarth wins, and claims the title of Talruum Champion. As his interpretation of honor has gotten him into conflict with the archtraditionalist Talruum, he decides to leave with the Weatherlight.

A few weeks later the crew reaches Oneah. After dealing with an insane guy living in the remnants of the library, a Phantom Monster and a bunch of goblins, they learn that the Juju Bubble is somewhere in Argive. The Adarkar Wastes to be precise. There they find an underground structure and what appears to be a Phyrexian War Beast (altough the story mentions a long neck, which these things don't really have.) While making their escape Sisay's first mate, Meida, dies, but not before she finds the Bubble. 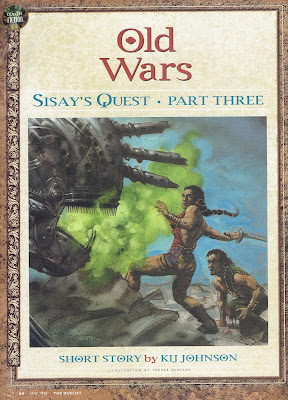 REVIEW
After Weatherlight The Duelist no longer contained stories covering the main plot of the sets, instead opting for background articles and "if you collect all the cards this is the order they go in" articles. I presume this was because around the same time they started announcing comics and novels. As a replacement we get a series of prequel stories, the first three focusing on how Tahngarth came to join the Weatherlight.

I love the Weatherlight Saga, but for years I didn't even know this stuff existed. After I found out, it still took a long time to get my hands on these old issues, so it's great to finally be able to read these stories! And they don't disappoint! I wouldn't describe them as amazing hidden gems that you have to hunt down, but they are fun stories that further fill out the backstories of characters I love. What's not to like?

The first part of the story is by far the most interesting, as it gives the most insight in Tahngarth as a character. Him being a nonconformist among the Talruum is cool, and rather unexpected. The way you usually see him talking about honor and battle makes him seem like the typical conservative "proud warrior race" guy, but of course that is all relative. Take him away from the rest of the Weatherlight crew and put him among the minotaurs and you see Tahngarth from a whole new perspective. His decision to join up with the ship happens a bit too quickly for my tastes and could have used a little more space, but clearly there was a strict word limit. Each installment is only 3 pages long, and on the whole Kij Johnson uses the space well.

Parts two and three are still cool, but mostly focused on battles. They do have some character work, but it is more on the nose, with Sisay explicitly telling Tahngarth that sometimes it's better to be stealthy or to avoid battle, that sort of stuff. So when it comes to characterization the story is a bit front-loaded. The other two parts are more interesting from a continuity standpoint though. For those still wanting more proof that the start of the Weatherlight Saga wasn't the clear reboot it is sometimes made out to be, part two takes place in the ruins of Oneah, which we first heard about in Ashes of the Sun. Part three's setting is post-Ice Age Terisiare, where the relics of the Brothers' War and Soldev are surfacing. I'm really glad there is at least one story out there making use of that setting. Ever since I read Matt Cavotta's interview with Pete Venters, in which Pete talks about setting up Terisiare as a setting for a Magic RPG full of hidden treasures and threats I've wanted to see it in action!

Part two has another "goblins are stupid" plot point, but it's actually pretty funny this time. Sisay pretends to be a goblin in the dark and spooks them, in part by continually given lower number for the goblins present and higher ones for the crewmembers. This confuses and scares the gobbo's (who obviously can't count themselves) to the point where they believe they are vastly outnumbered and decide to leg it. I've done a few reviews in the past where I've been very annoyed with stories that hinge on goblins not being very bright, so I just wanted to say you can still entertain me with a plot like that, as long as you give it a slightly new twist, keep it short and use some actual humor. 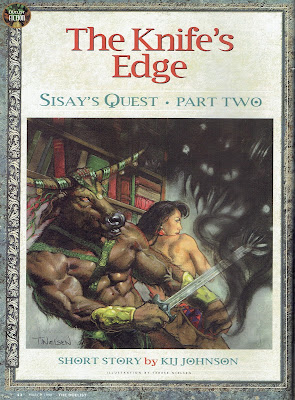 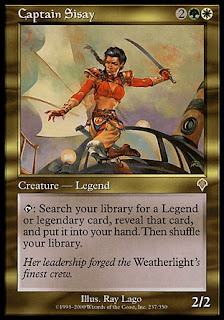 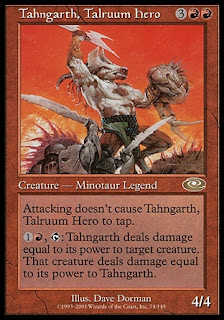 CONTINUITY & TIMELINE
As a reminder, since all the Rath block stories happen very close together, and since Gerrard's Quest and Rath & Storm contain quite a few flashbacks, I'm going to do the full continuity discussion and timeline update after I've covered all the relevant stories. There are some interesting things to note here though: