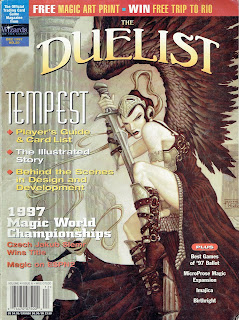 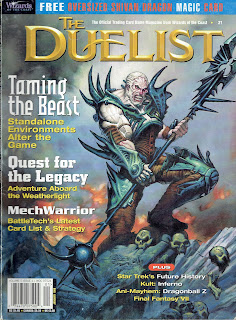 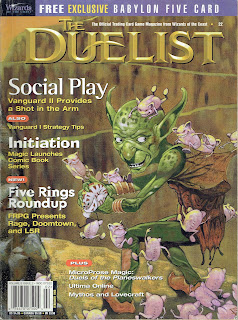 Weatherlight had a storyline summary, plus two short stories that gave an expanded look at certain characters and scenes. Here The Duelist takes a different approach. The main feature now is the Tempest storyboard, which puts all the cards from Tempest featuring lore in the correct order and thus tells the story. Additionally there is the return of Dominian Chronicles, who gives us what is essentially "the Planeswalkers Guide to Rath". Continuity FAQ also continues, and issue 21 kicks of the story Sisay's Quest, which is a prequel telling us how Sisay and Tahngarth met. I assume that by now the plans for the novel line had progressed far enough that stories chronicling the events of Tempest itself were saved for Rath & Storm, thus we get a storyline summary and prequel stories instead. As Sisay's Quest second and third parts appear in issues 23 and 25, I am saving it to review the story as a whole later on. For now, let's get into the articles.


TEMPEST STORY BOARD
Here we see how stories will be told for the coming year: entirely through the cards, with an article in The Duelist telling you in which order they go and slightly expanding on things. The feature is only three pages long and those are mostly filled with pictures, so... I don't really need to summarize that any further, do I? 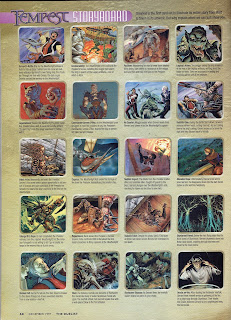 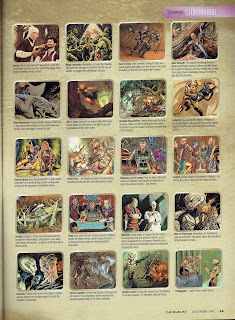 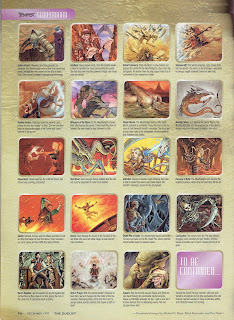 Uhm... now I've got a bit of a conundrum on my hands though. How on earth do I review this? Video games, online choose-your-own-adventure's, and now... whatever this is. I'm really stretching my reviewers muscles here!

The story itself is build up quite well, starting off with an action scene as the Predator. Then we get into some world exploring as Gerrard wanders through the Skyshroud Forest and meets up with Eladamri and the Oracle en-Vec, the local resistance fighters. Finally we get into a standard fantasy "road trip" as the Weatherlight must cross a secret path into Volrath's Stronghold to free their captured allies. The road trip is full of what I call random encounters; fantasy monsters only there to be defeated, rather than to add anything to the plot. Normally I despise those sequences, but the format of a card game and a three page summary means these encounters don't actually kill the pacing of the story. Furthermore, Slivers, Carrionette's and the Death Pits of Rath themselves are very interesting, original obstacles to throw in front of our heroes.

About the format... I can see why some people had problems with it. The story is quite fast paced, with a bunch of twists and turns. You really need this summary to figure out what is going on. For example, Gerrard falls of the Weatherlight after the initial battle, but is then reunited with the rest of the crew later on. From the cards this isn't entirely clear. In fact, if you gave me all of Tempest and told me to put it in order, I'd probably put Abandon Hope somewhere near the end as the dramatic ending, with Broken Fall and Anoint at the very end as a teaser for the next set.


Other than the order of the story, the pacing also has some problems. We have several cards showing Gerrard fighting Rootwater merfolk and several of Volrath torturing Tahngarth and Karn. Ertai's meeting with Lyna is stretched out over Soltari Emissary, Shadow Rift and Reality Anchor... for me the problem isn't that I'm seeing the same characters over and over again, it's that I'm seeing them doing almost the exact same things over and over again! The current way story is done, with only a handful of scenes shown on the cards, is better in that regard. Although, in the Weathelright's Saga's defense, the scenes portrayed do feel a lot more specific than in Battle for Zendikar. I mean, Glissa's Renewal just shows her waving her staff around, and Gruesome Slaughter may be a great depiction of the slaughter at Sea Gate, but isn't that notable when half the set shows Eldrazi killing people. I much prefer arts that show very specific scenes or battles, like Sudden Impact, Torture Chamber or Interdict. (Or, fair is fair, Deicide and Ugin's Insight.)

On the other hand, there are also things that work much better in card form than in the summary. Take the Vathi-il Dal stuff for example. If you collect the cards you might notice that between his own card, Sudden Impact, Repentance and Diabolic Edict, there is a neat little story going on. Always nice to have a subplot, and the villain's second in command trying to usurp his place is a classic one. But once you put everything in order it feels very strange that Vathi is introduced, immediately betrays Greven and is killed in the next scene. It works on the cards, since you don't quite know how much time passes, but it is rather awkwardly placed in the summary (And in the comic and the novel, for that matter.)

Still, for all my critiques of the format, I liked the story. The characters are fun, the battles exciting and the authors are not scared of putting their characters through some big changes and trauma's, though the clearest examples of that will only happen in Stronghold and Exodus. For now, with only half the story told, and with it told in such a strange format, reviewing it is a bit difficult. I'll give a more in depth review we get the more in depth version of the story in the aforementioned comic and novel. 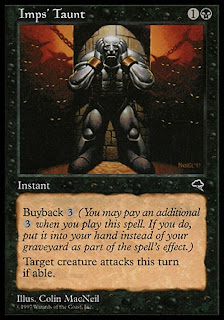 THE "PLANESWALKERS GUIDE TO RATH"
These articles were also available on The Duelist Online, and have been reposted by MORT on MTGSalvation. Here is the entry from issue 20 and here the one from issue 21.

These articles are exactly what you expect: explanations about Rath's environment and creatures. While I must admit Wizards' has gotten much better at designing planes in the post-Mirrodin era, Rath is probably the most interesting of the early planes. It may not have all the history and political intrigue we saw in Ulgrotha or Jamuraa, but it's truly alien character, with the eternal stormy sky, the moving Flowstone earth and bizarre inhabitants like Slivers, Licids and Spikes, makes it a welcome change from the standard fantasy settings that have been the main settings visited up to this point.

We are given info on the Kor, Vec and Dal, as well as the history of the Thalakos, Dauthi, Soltari, Skyshroud Elves and Rootwater Merfolk, the latter five all having originated in Dominaria. In fact, the article describes Rath as a kind of parasitical plane attached to Dominaria and only mentions creatures being taken from there. Next time, when we look at the coverage of Stronghold, we'll see hints that the more bizarre creatures, like Slivers and Licids, were mutated or created by Volrath himself. That all strongly implies that everything on the plane was supposed to have originated on Dominaria! Luckily that is never explicitly stated, so there is no problem with later revelations about the origins of certain species, like the Kor's home plane being Zendikar.

Other things have changed over time though. The claim that Rath is "a few thousand years old" is false, as the novel Bloodlines reveals Rath is at most one thousand years old. The idea that no planeswalkers ever discovered it, is proved false by Urza's cameo at the end of Exodus. Also interesting is that Rath is called a "pocket plane" here. We are never given a good definition of the various kinds of planes (natural, artificial, pocket, planar void), but in the future Rath will generally be called an "artificial plane", while "pocket plane" is reserved for the Meditation Realm. Maybe we could just say that Rath is artificial AND a pocket plane? Or that pocket planes are a subset of artificial planes that are attached to "proper" planes, as Rath is described as being to Dominaria in this article?

Finally, some short thoughts that came to me while reading these articles: 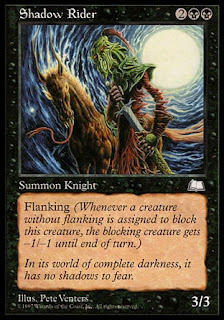 ... FAQ?
Last week we saw the beginning of a new feature, Continuity FAQ. This column is continued here, only it gets renamed, first to Dominia FAQ and then to Dominian FAQ. That's what it will stick with in the future.

The questions get a bit more interesting this time around. Issue 20 answers the age old questions of when and where sets take place. The answers here are significant as they show the storyline has moved on a little. Antiquities now happened ~4200 years ago, instead of the "About 4000 years ago" we heard so often in the pre-Weatherlight era. Now Fallen Empires and The Dark are said to be that long ago. The other entries have some interesting stuff to say about the portals between Dominaria and Rath (note how it only talks about portals between those planes), Shauku, and the name Squee. 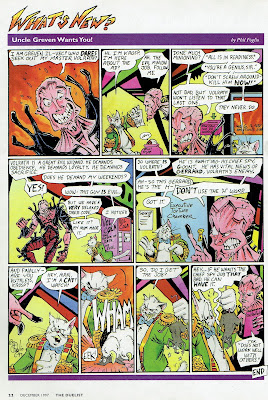 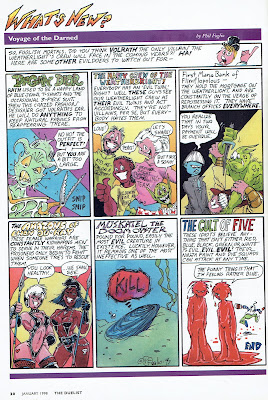 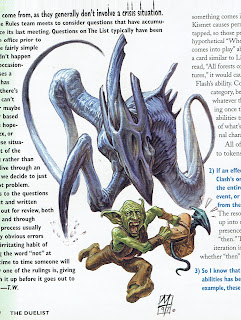 And that's it for this week! Next week we'll see what happens to the crew when they finally reach the Stronghold itself! 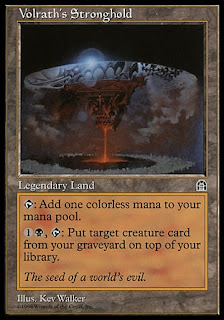