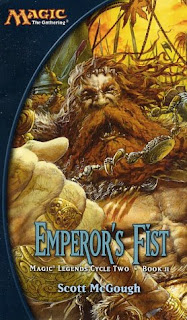 SUMMARY
After last book's failure of imperial assassin Ramses Overdark to quell rebellion in the Edemi islands, the emperor of Madara sends in the army, headed by Marhault Elsdragon. Overdark is ordered not to interfere, and imperial champion Tetsuo Umezawa and his crew are punished for their interference in Overdark's attack on the Edemi's by being forced to serve under as army officers for the time being. 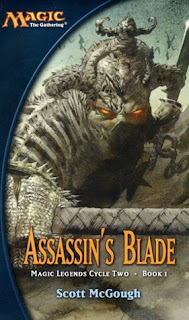 Writer - Scott McGough
Cover art - ...not credited! Perhaps Greg Staples, who did the next book as well?
First printing - December 2002

SUMMARY
We are introduced to the empire of Madara, which is controlled by a mysterious emperor (who in this book only manifests as a face, not described in detail, summoned in a specific shrine) who rules through three individuals: imperial assassin Ramses Overdark, army general Marhault Elsdragon, and imperial champion Tetsuo Umezawa.

We open to Overdark asking the emperor for his blessing to attack the rebellious Edemi Islands. He plans to use this attack to rid himself of his rivals and thus sends his minion, the creepy wasp-lady Xira Arien after Umezawa. She finds him with his second Tor Wauki, his artificer Ayesha Tanaka and her student healer Kei Takahashi in the village of Sekana. The nekoru cat-dragon Wasitora has claimed the settlement for herself (mainly so the locals will give her loads of fish), so it is up to the champion to defend the emperor's honor and chase away the monster. He challenges her to a duel and at one point he has her on the ropes, only for the battle to be interrupted by an Elder Land Wurm from the Edemis. Waisitora attacks the thing, mainly to defend her turf, but Tetsuo sees this as an honorable act and thus after defeating the wurm he charges Kei with healing her. While the healer is looking after his charge he is attacked by Arien, who lays an egg inside him. She lets herself be seen and says she's going to the nearest Edemi island of Kusho, luring the champion and his people there. Tetsuo appoints Waisitora as his deputy defending Sekana and heads off after Arien. 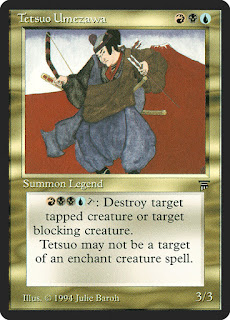 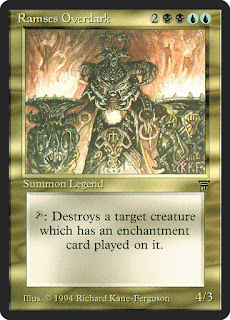 "The Mirage Document" ...or not

Okay, let's start with a bit of an emberassing confession. Way back when I discussed Jeff Lee's site, The Legends of Magic, I did not cover the Mirage section because I wanted to cover "The Mirage Document" first. The Document has floated around the internet for a couple of years now, but eh... when I actually got around to analyzing it, it turned out it contains nothing new! It is just a splicing together of the Mirage and Visions articles from The Duelist, from the Magic website and, drumroll... the Mirage section of The Legends of Magic!

So yeah. What are we going to do now? Well, first I'm going to go over what Jeff Lee had to say about Mirage. Although not an official source, his site dominated the collective memory of the Vorthos community for years, so it's good to know which information came from there. After that we are going to look at all the temporal references in the various Mirage sources to see if we can finally hammer out the timeline of Jamuraa. Which in turn would finally allow us to put a handful of short stories from the anthologies on a definitive spot on the timeline, after ages of lounging on a temporary placement.

While working on the Mirage timeline article (which I will publish directly after this post) I ran into the problem that certain older websites were not only down on their original location, but that the reposts I had been linking to in my older articles have also disappeared. So to prevent link rot in the future, I'm reposting those to my blog now, so I can always point to these entries if they come up in the future.

Second entry: Visions: the Backstory. The archived version of the page can be found here.

Mirage - The Story of Jamuraa

While working on the Mirage timeline article (which I will publish directly after this post) I ran into the problem that certain older websites were not only down on their original location, but that the reposts I had been linking to in my older articles have also disappeared. So to prevent link rot in the future, I'm reposting those to my blog now, so I can always point to these entries if they come up in the future.

First up: Mirage - The Story of Jamuraa. The archive of the original page can be found here. 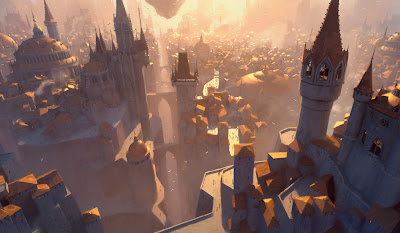 SUMMARIES
There are ten stories here, five each for Guilds of Ravnica and Ravnica Allegiance. You can just go read them on the Magic Story page of course, but people seem to like it when I include summaries, so I will. Check out the stories themselves first if you don't want spoilers!

Under the Cover of Fog
Merret, a minor Dimir operative, steals an Elixer of Focus, but gets in trouble when Grimbly Wothis, the minotaur he stole it from, chases him to his house. There it is discovered Merret's baby has eaten bread soaked in the elixer and developed powerful magical powers. Wothis want the baby as payment, but then guildmaster Lazav turns up. He wipes the minotaur's mind and forgives Merret for his incompetency in exchange for altering the minds of his family and inserting an "aunt" into their home who will tutor the kid.

Testing the Dark Waters
An Izzet scientist, Leighbet, discovers a way to make plants immune to electricity but gets fired for unauthorized use of equipment. She sets up her own lab and hires an assistant, Tamsyn. While attempting to make humanoids electro-proof Tamsyn kills the test subjects so the project remains secret. Leighbet signs up for some Simic experiment to make more money to keep the experiments going but is horribly mutated as those experiments react to the magic she has herself been exposed to. She hides in the sewers. Tamsyn tracks her down and reveals she's a Dimir agent, but Leighbet manages to kill her. 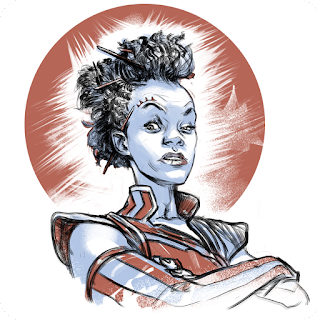