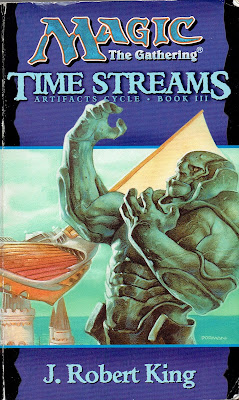 SUMMARY
Since we last saw Urza he has hooked up with Barrin and has founded the Tolarian Academy. There they gather promising wizards and artificers from all over Dominaria and have them work on ways to combat Phyrexia in secret. Not even the students themselves know just what they are working on. Urza, who now goes by the name Malzra, is planning to travel back in time to defeat the Phyrexians before they became a thread. Since silver is the only material capable of surviving the stresses of time travel he creates a golem from the stuff. Xantcha's Heartstone is put in the golem's head, and somehow it gives him a personality of its own. This golem is of course our old friend Karn (Though one of the students, a prankster named Teferi, initially calls him Artie Shovelhead)

Keeping your plans secret from your students turns out to be a bad idea. Karn's best friend, Jhoira, is pining for a lover and thus when she discovers the shipwrecked hottie Kerrick she decides to keep him hidden from the teachers. Unfortunately, Kerrick is actually the Phyrexian Sleeper Agent K'rrick. After gathering enough information through Jhoira he summons a bunch of Phyrexian Negators who slaughter their way through the academy. With only Urza and Karn left, the golem is send back in time. He manages to stop Kerrick from summoning his troops, but the time machine overheats and- BOOM! 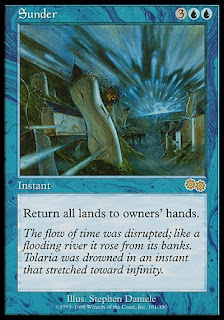