Ur-Golem's Eye (and a whole bunch of other stuff)

Once upon a time on MTGSalvation, someone brought up the fact that Mirrodin took place millennia after all other stories. In response the then head of the Creative Team Brady Dommermuth pointed out that the flavor text of Ur-Golem's Eye was an error, and that only a few centuries were supposed to have passed.

This is emblematic of what happened to the debate about the Mirrodin timeline. While there were loads of temporal references in the books and in online articles (as we've seen in the last four reviews), as time passed those became harder and harder to find, and thus the debate became focused on the most visible pieces of evidence: flavor text. Which is kinda convenient, as a single piece of those is much easier to declare an error than a whole pile of different sources.

This wouldn't be Multiverse in Review though if I just left it at that. I've dug up all those other references, so now it is time to put it all together, showcase the inconsistencies and trace the development of the Mirrodin timeline over the years. But we're also going to do something else. While trawling through forum threads for my research I kept finding interactions between Brady Dommermuth and... eh... myself. Which got me thinking about the relationship between the Creative Team and the storyline fans, and how it often wasn't great at the time. So for those interested in that sort of thing, stick around after all the timeline talk for some introspection on, well... myself around age 18.

Yeah, this was a weird one to write. 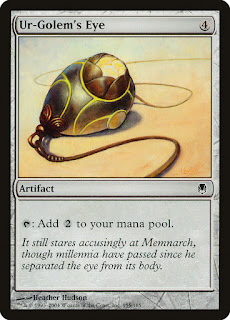