Okay, so... we've reached the third Kev Walker promo comic and I've officially run out of things to say about them. They are pretty, it's cool that they did these things back in the day, it's an adaptation of a scene from the novel but different enough that you can't consider it canonical... Keldons apparently look like Lobo sometimes. 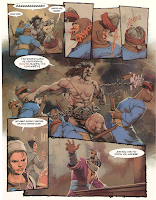 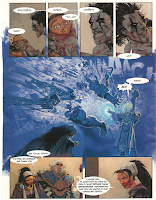 This is what it's like being a completist. Sometimes there are things you just can't say anything interesting about, but you got to have them because they are part of whatever it is you collect.

I'll try to get the review of the actual novel up by Tuesday. At least there is actually something to talk about there!
Posted by Squirle at 15:39 2 comments: 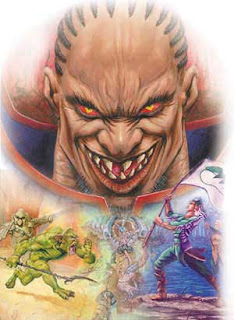 SUMMARY
Ehm... this story is available online and it is less than a 1000 words long, so you're really better of just reading it, but if you insist on a summary...

What, you want more? We are entering an age now where pretty much all of the story is put into the book line. Any other storyline source that get produced up until... jeez, the Kamigawa vignettes I guess, are really just fluffed up commercials for the books. Their writing is generally okay, but their size means there really isn't much to review. There simply isn't space to do anything special. 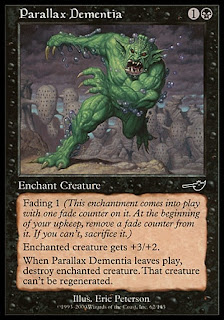 Okay, here we actually do have something to discuss!

The elves talk as if Eladamri is still leading the rebellion, which suggest it happens during the Nemesis novel. Yet that seems unlikely. In that book it is a huge plot point that Crovax, despite being the strongest competitor for the title of Evincar otherwise, failed to score a victory against the rebels. If his forces had a second battle in which he almost won, only to lose his troops to the Parallax, that would most certainly have come up.

So I would say that the only explanation for this is that story takes place during Nemesis's epilogue, or shortly afterwards: before news of Eladamri's disappearance becomes widespread, but after Crovax is named evincar and is campaigning to secure his reign. This would also allow us to tie the Parallax to the Rathi overlay, since the overlay doesn't begin until the last few pages of the book.

Aaaaaaand... that's it! You've been warned, there will be more of these mini reviews in the future. Next up is the Prophecy promo comic, but after that it is back to a proper book! (Or, well, proper... it's still Prophecy...)
Posted by Squirle at 21:14 No comments: 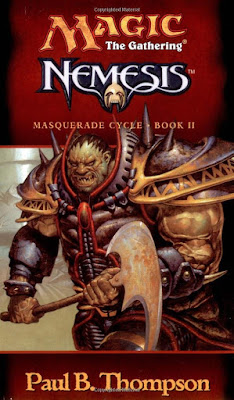 SUMMARY
When the Weatherlight escaped Rath it left two crewmen behind: Crovax and Ertai. Ertai ended up on board skyship Predator, a prisoner of Greven il-Vec. It turns out that Crovax, already turned into a vampire, was brought to Phyrexia and further enhanced. He was then send to Phyrexia to be its new evincar, as Volrath had left to go star in Mercadian Masques. However, while a Phyrexian priest called Kirril worked on Crovax, an inner circle member called Abcal-Dro has the daughter of Eladamri, Avila, killed and used her body to create Belbe. Belbe is implanted with a device that allows Yawgmoth to see through her and is then also send to Rath as an emissary, to oversee the struggle for who becomes the new evincar. Abcal-Dro believes survival of the fittest is the best method of selecting a new ruler. 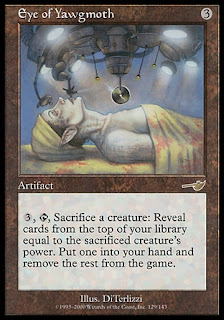