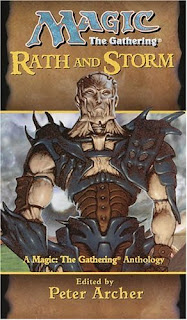 SUMMARY
The structure of this book is unique in the Magic canon. Technically it is, as the cover states, an anthology, with each individual story focusing on a different character and written by a different author. However, unlike all Magic's other anthologies, the stories together make up one big one covering the entirety of the Weatherlight's adventures on Rath. Everything is tied together with a framing sequence of a young boy called Ilcaster being told the saga by an old librarian, somewhere in the future. In these sequences the librarian also summarizes a bunch of stuff that was already covered in other versions of the story, like the flashbacks from Gerrard's Quest, or Starke re-joining the ship from Maelstrom.

Previously when I reviewed anthologies I discussed all of the stories separately. Here however, there is not much difference in the style of the stories. With everyone striving for pretty much the same tone and working from the same plot outline the individual quirks and favored tropes of the authors are not very noticeable. So this time I'll mostly just summarize the stories, before doing an overall review at the end.

Obviously we have already seen most of the plot here in the summary of Weatherlight and the storyboards of Tempest block in The Duelist (Here, here, here and here) and in Gerrard's Quest, but there's actually a lot added here, so it's worth taking a closer look.

Gerrard's Tale, by Michael Ryan
(At least, he's credited as that at the start of the story. In the blurb about him at the start he's called Michael G. Ryan, and in the list of authors at the back only as Mike Ryan.)

We already saw mister Ryan chronicle how Gerrard rejoined the crew in Torrent, but here he gets to do so again. This time we learn that Gerrard was training soldiers of the Benalish army, but that a guild of assassins was hiring his students out from under him. When Tahngarth tells him of Sisay's capture, he first has the minotaur help him solve this problem. In the end the master assassin is arrested and Gerrard gives the corrupt general that helped the assassins the opportunity to save his honor by committing suicide.

Gerrard's friend Pol Cordel is missing from this story, but contrary to what I remembered when I reviewed Torrent, the hourglass pendant does actually show up. Gerrard leaves it somewhere before leaving Benalia. That happens off screen, so the scenes with Pol could still have happened between the lines. Unfortunately that still leaves us with two contradictory scenes of how Gerrard and Tahngarth met. Here the minotaur turns up at his work, rather than Gerrard finding him about to clobber an annoying missionary. 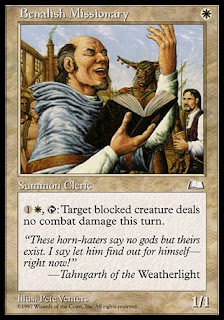 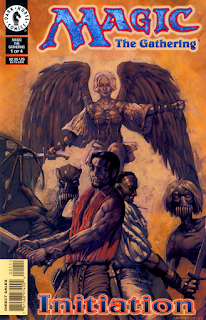 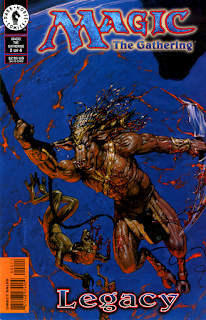 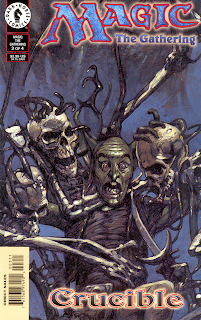 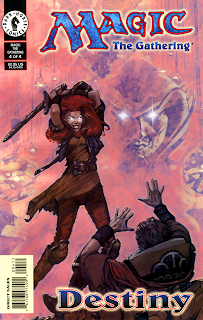 Before I get into the comic itself, my apologies for not updating the blog all that often in the past month. Work, the holidays and some personal stuff all took priority. For the foreseeable future I am planning to do a review every other week. That's not as often as I would like, but it would be nice to get back to some sort of regular schedule, and for now that means a slightly slower pace. Hopefully I'll be able to go back to weekly reviews in the future!

With that announcement out of the way... Gerrard's Quest!

SUMMARY
Issue one starts with the Weatherlight coming to Rath. Gerrard is mopey about having been manipulated all his life, and about the fact that people are probably going to die "because of him". He then flashes back to the day he left the Weatherlight, years before. Back then Volrath's forces had invaded Urborg and killed Crovax's father to draw the Weatherlight to them. In the subsequent battle Gerrard's friend Rofellos was killed by Gallowbraid. The baddies are chased of by Selenia, but the angel herself... well, after the battle Crovax destroys the artifact he used to summon her and she is also teleported to Rath, but whether it's Volrath's forces dragging her through a portal or whether the artifact was keeping her on Dominaria isn't entirely clear from the art. During the battle one of the minions called out Gerrard's name, which makes him realize the things were after him, not Crovax. He confronts Sisay over this, who reveals that her parents were allies of Gerrard's parents, as well as his adoptive dad Sidar Kondo and his mentor Multani. He learns that "Those who serve the Legacy" had been grooming him to destroy the Lord of the Wastes. Gerrard, mad at the deception and the death of his friend, quits. His flashback ends just in time for the final splash page that shows the Predator attacking. 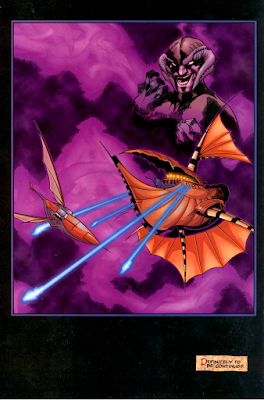