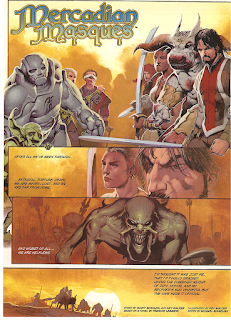 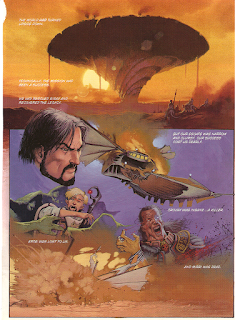 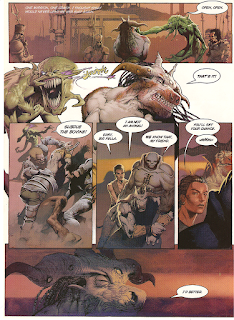 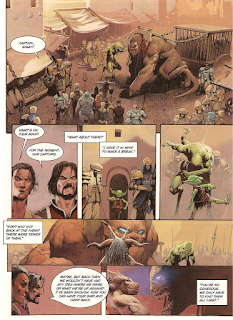 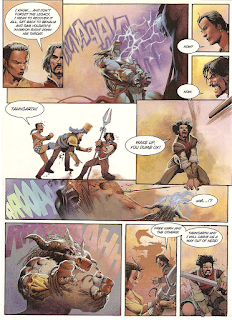 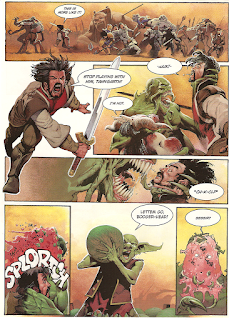 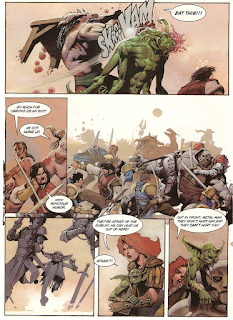 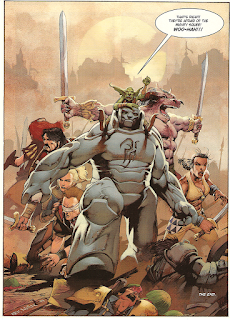 Something that probably nobody notices but that a comic aficionado will appreciate is the use of "sound effects" in this comic. Look at that big "SKRA-VAM" when Tahngarth hits a Cateran Enforcer with a table, juxtaposed with the smaller "chut-sk" of the Enforcer's neck breaking, for example. It's a small detail, but one that shows that a lot of thought went into the presentation of this comic. These aren't just a few illustrations of the story with text balloons slapped onto them.

As for the story... I dunno. We get a recap, a short moment to set the stage, and then a fight scene. It's fine, but of course deliberately incomplete to get you to buy the novel. And I was going to buy the novel anyway, so... All I can say is that it does get the tone of the novel across quite well. There are some funny moments, some characters work, but the focus is mostly on the action. You know what you are going to get in the book when you buy it based on this advertisement. I do think it's smart that though that they managed to find space for some character work with Tahngarth. Not to spoil the next review, but for me the time devoted to character interactions there is much more of a draw than the setting or the plot.

As I consider this non-canon there's no continuity or timeline talk to be had. I'll just point out that in the novel the scene is longer. The escape starts with a bit of deception in which a local boy the crew befriended pretends to be a wine seller to create a diversion, and there is a bit where Karn grabs a giant and dances around with him, since as a pacifist he refuses to fight.

And what else is there to say? It's just an elaborate advertisement, but a quite awesome one.

Next time I'll be back with a longer review, because obviously I did go out to buy the novel! I've got a big deadline at work coming up next week, but after that I'll try to put the next review up as quickly as I can.
Posted by Squirle at 18:57